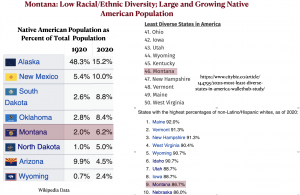 In racial/ethnic terms, Montana is not a diverse state. It has the lowest percentage of Black 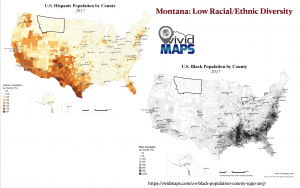 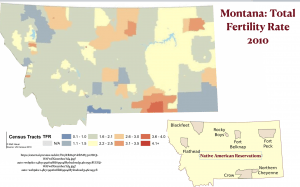 population, moreover, is expanding. As can be seen in the paired maps, the Total Fertility Rate is significantly higher on Native American Reservations than it is elsewhere in the state. 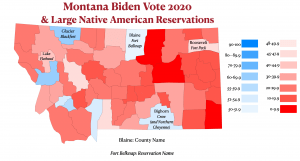 Native Americans in Montana, as in most other parts of the country, vote heavily for candidates in the Democratic Party, influencing statewide elections. As the Missoula Current reported just after the 2020 election, “The Native vote in Montana has made the difference before, when Indigenous voters helped Sen. Jon Tester, a Democrat who has advocated for Indian Country, … get elected the last three terms in often-close races.” Although the indigenous vote has not had such an impact on presidential contests in Montana, it is still visible on electoral maps. In 2020, sparsely settled Glacier County, the main home of the Blackfeet people, stood out as the state’s bluest county, defying the norm of Republican-voting in areas of low population density. The same pattern is found in other Montana counties with Native American Reservations, although not to the same extent. On the 2020 electoral map, Blaine and Bighorn counties, both with large reservations, appear in light blue. In contrast, Roosevelt and Lake counties, which also have large reservations, are mapped in pink. Donald Trump won both these counties, but did so by narrow margins, especially in Roosevelt. 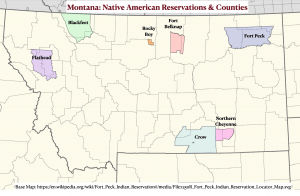 These seeming discrepancies can be partly explained by a combination of local political geography and demography. As can be seen on the modified Wikipedia map to the left, county boundaries and reservation boundaries do not coincide. The Flathead Reservation, for example, is centered in Lake but extends over portions of three other counties. More important, not all residents of the 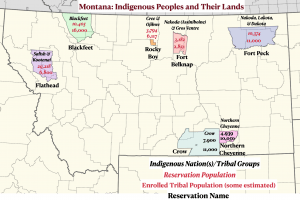 reservations are Native Americans. The Flathead lands in particular were opened to white settlement in the early 1900s; as a result, non-indigenous people significantly outnumber indigenous people on the reservation. Lake County’s Republican-voting behavior is thus easily explained. 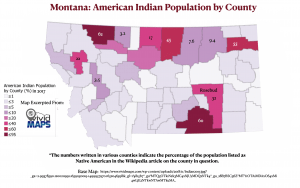 The question remains as to why Glacier County votes more heavily Democratic than other Montana counties with large Native populations. The “American Indian Population by County” map, excerpted from a Vivid map covering the United States, seems to offer a partial explanation: Glacier is depicted here as more than 95 percent indigenous, a much higher figure than either Blaine or Roosevelt counties. But Bighorn County is also depicted as more than 95 percent indigenous, yet it gave 46 percent of its vote to Trump (as opposed to Glacier’s 33 percent). Could it be that the Crow people are somewhat less supportive of the Democratic Party than the Blackfeet? Or is there a problem with the data? As it turns out, Wikipedia articles on Montana counties give very different figures from those found on the Vivid Map, with Bighorn County being 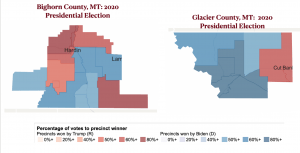 reported as only 60 percent Native America.* But then again, Glacier County is listed at only 62 percent Native. Precinct-level maps for both counties show sharply differentiated red and blue zones, presumably reflecting racial differences in different areas. The blue zones in Glacier are, however, distinctly bluer than those of Bighorn. 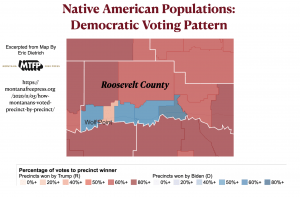 Elsewhere in Montana as well, the correlation between American Indian ethnicity and voting behavior is close enough that one can apparently discern which areas of the reservations have the main concentrations of Native Americans. Fort Peck Reservation, for example, spans several counties, but its only blue precincts are located in southwestern Roosevelt County.

*Both sources rely on U.S. census data. The Wikipedia articles give figures from 2000 or 2010, whereas the Vivid map is based on 2017 data. It is highly unlikely, however, that there have been enough demographic change in the intervening years to account for these different numbers, 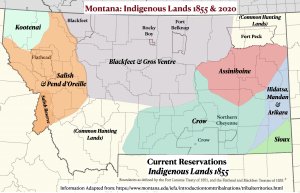