The Marshall Islands is a sovereign state in the Pacific Ocean, recognized as such by its fellow members of the United Nations. But the Marshall Islands forms an unusual country in several regards. Its population is small (62,000) and its land area meager (70 square miles), yet its tiny atolls spread across a vast swath of the Pacific; if one includes its Exclusive Economic Zone of sea-space, the Marshall Islands is a large country (see map). The sovereignty of the Marshall Islands, however, is less than complete. According to the “Compact of Free Association” signed in 1986 when independence was gained, this former U.S. “Trust Territory” allowed the United States to retain responsibility for its defense. In return, the islands were promised substantial subsidies and other benefits. 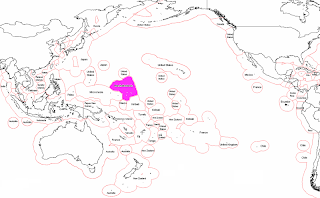 Technically speaking, the Marshall Islands is an “associated state,” defined by the Wikipedia as “a minor partner in a formal free relationship” with a larger sovereign country. The United States has two other sovereign associates in the Pacific: Palau and the Federated States of Micronesia. A similar compact of free association links New Zealand to the Cook Islands, but the latter is not considered sovereign and does not belong to the United Nations. It supposedly has the right, however, to declare independence if it so chooses.

One perk provided by the Compact of Free Association is the right to travel and work freely in the United States. The American center of Marshallese culture is Springdale Arkansas, home of Tyson Foods—the world’s largest chicken processor. Some 10,000 of Springdale’s 70,000 residents hail from the Marshall Islands. Originally, Marshallese living in the U.S. were eligible for immediate health care coverage under Medicaid, but that provision expired in 1996. The current House of Representatives health care bill would restore Medicaid coverage, but the Senate bill would not. The issue is important because most Marshall islanders in the States work for low wages in chicken abattoirs, an injury-prone environment, and the community has very high rates of diabetes. (The Marshall Islands also has the world’s highest rate of leprosy.)

The Marshall Islands faces long-term economic challenges as well. U.S. subsidies are declining, and in 2024 the major “compact grants” from the American government are set to expire. As a result, on January 4, 2010, Asian Development Bank officials urged the country to start generating surpluses that it could put into a trust fund.

The Marshall Islands play an important role in U.S. military affairs, however, which may lead to continuing subsidy streams. The islands are the primary home to the Ronald Reagan Ballistic Missile Defense Test Site, which covers no less than 750,000 square miles of sea-space. The Reagan Test Site’s main facilities are on the small islets of Kwajalein Atoll, which ring one of the world’s largest coralline lagoons. The lagoon forms, in essence, the world’s largest target, well suited for testing missile accuracy (see map). Understandably, Kwajalein residents are not very happy with the situation. Almost all of them have been forced onto one island, Ebeye. Refugees from nuclear testing in Bikini Atoll were resettled on the same island in the 1950s. Today some 13,000 to 15,000 residents are crowded onto a mere 80 acres of land. Not for nothing is Ebeye called “the Slum of the Pacific.”