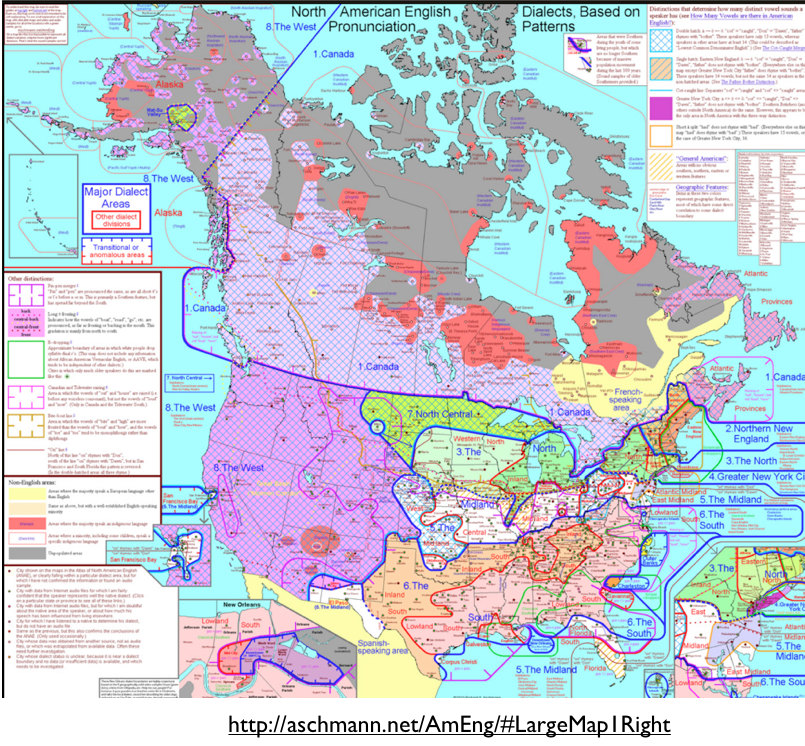 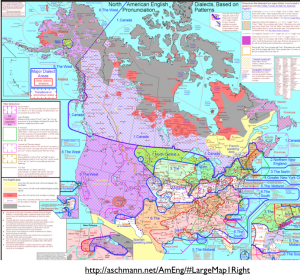 An internet search of “bad map” returns, among many other examples, Rick Aschmann’s map of North American English Dialects, reproduced here. Critics complain that the map is so busy and complicated as to be almost unreadable. But what the map lacks in grace and style, it makes up for in detail. On Aschmann’s own website, the map is large and interactive: if one clicks on the green dots representing selected cities, one is taken to videos giving pronunciation samples. The website also contains a great deal of textual information, and is updated regularly, with the most recent addition dated March 13, 2012. For those interested in dialectology, the map and website are veritable treasure troves. Inset maps of local areas, such as New Orleans with its three dialect zones, are particularly interesting—although I do wonder if the New York metropolitan area could have been more finely divided. Another intriguing inset map shows a limited dialect zone in far eastern North Carolina, called here “Down East & Outer Banks.” Having spent time on Okracoke Island, I can attest that the local dialect is highly distinctive.

Aschmann obviously spends a great deal of time on this project, although he describes it a mere diversion.  As he puts it, “I am a professional linguist and a Christian missionary, working in indigenous Amerindian languages. My work has nothing to do with English, so that is why this project is just a hobby.” I would object to the word “just” in the preceding sentence, as Aschmann’s work constitutes a real contribution to knowledge, in my view. 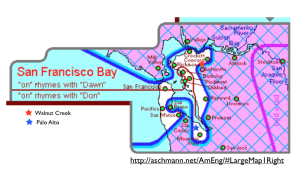 Mapping such intricate patterns is obviously a challenge, in part because speech patterns at this level of detail can change relatively quickly. Another problem concerns the limited number of data points, which may result in more precise mapping than is actually warranted. Such quibbles come to mind when I examine the inset map showing dialect areas in California’s Bay Area. According to the map, the region is divided on the basis of the so-called cot-caught merger (also reflected in words such as “Don” and “dawn”). Here we are informed that people in the core Bay Area (white on the map) makes a distinction between these vowels, unlike those in the more peripheral areas. Such a pattern does not match my personal experience. I grew up in Walnut Creek, which is supposedly situated on this dialect border, but in my dialect, almost of the paired word in the table below are pronounced identically (I do differentiate “”cock” from “caulk” and “box” from “balks,” but only because I pronounce the “l” in the latter two). The map also places Palo Alto in the “cot≠caught” area, but my 14-year-old daughter looked at me with disbelief when I mentioned that some people pronounce these words differently. So did three of her friends who happened to be visiting at the time, all of whom grew up in Palo Alto. Her fourth friend, however, had a different take: “Oh, my parents argue about that all the time, because my dad is from New Jersey…” 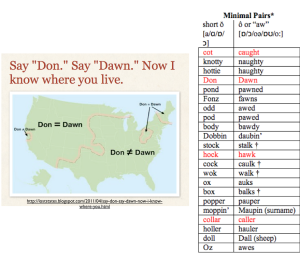 Personal reflection and anecdote, however, are poor methods for determining such differences, as people are often unaware of how they actually pronounce specific sounds. Instead, careful investigation is required. We therefore contacted Stanford linguist Penelope Eckert, who has conducted detailed research on the topic, as is evident on her website. She reports that the cot/caught merger is essentially complete among younger speakers throughout the region. To the extent that Aschmann’s inset map of the Bay Area is accurate, it is so only in regard to the region’s oldest speakers.

Research also indicates that parents’ vowel distinctions may not even be apparent to their own children. Children, in general, pick up their pronunciation patterns from peers, not mothers and fathers. As noted in a recent essay:

The Smiths, natives of Philadelphia, have settled in California and are raising twins Dawn and Don. When Mom or Dad calls either child by name, both kids answer. Even though the parents are pronouncing “Dawn” and “Don” distinctly, the children can’t seem to hear any difference. Why not?

Interestingly, this vowel merger causes anxiety among some people, as they worry that they are speaking incorrectly when they pronounce “Dawn” and “Don” in the same manner. Evidently, the distinction between dialectal differences and correct or incorrect pronunciation is not always clear.