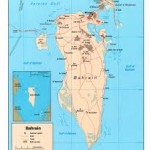 What’s In A (Place) Name? The Gulf Controversy

In mid-January 2010, the Islamic Solidarity Games—scheduled to take place in Tehran in April—were cancelled over a toponymic dispute. The Iranian organizers of the athletic competition insisted on labeling the body of water located between Iran and the Arabian Peninsula the “Persian Gulf” in their promotional materials. The event’s organizing committee, based in Saudi Arabia