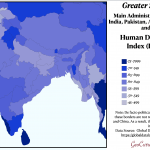 Today’s New York Times includes three important articles pertaining to Sunni/Shiite tensions. Two of these are all-too-typical reports of terrorist attacks on Shia pilgrims by Sunni extremists, one in Karachi, Pakistan, the other in Iraq. The third article, on new leadership emerging among the Pakistani Taliban, is much less conventional (“With Taliban Leader Reported Dead

The former princely state of Kashmir is one of the world’s most contested territories (see map). During the British colonial period, Kashmir was ruled by a Hindu Maharaja (under British “advisement”) even though its population was (and is) mostly Muslim. The political partition of British India into the independent states of India and