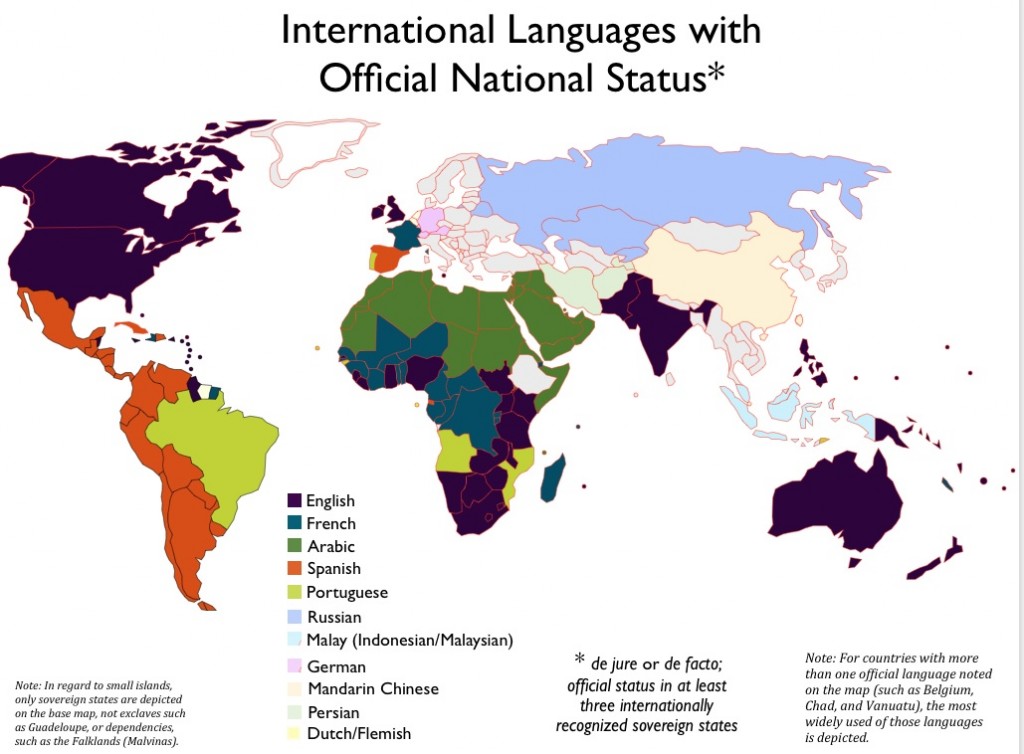 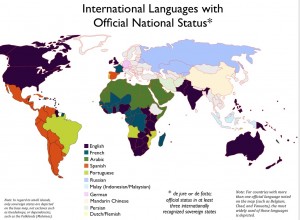 As noted in a previous GeoCurrents post, mapping individual languages is a trickier exercise than it might seem. Most such attempts actually produce political-linguistic maps, delineating the languages officially used by different countries on an ad hoc basis. The alternative map offered here is also both political and linguistic, depicting not the distribution of languages per se but rather the use of official languages (whether de jure or de facto) by internationally recognized states. Unlike most maps in this genre, however, it portrays such languages in a relatively rigorous manner.

Another problem concerns the mapping of states with more than one official language on the list of “international languages.” There are more of these states than one might think. In three countries, three of these languages have official status: Belgium (French, Dutch, and German), Equatorial Guinea (Spanish, Portuguese, and French), and Singapore (English, Mandarin Chinese, and Malay). In such cases, I have tried to map the most commonly used language, although such a determination is often no easy manner. For Djibouti, for example, I picked French over Arabic, as French is used more extensively in the country’s educational system, whereas for Chad I picked Arabic over French, because Chadian Arabic is widely used as the country’s lingua franca. I selected English over French in Vanuatu because the main spoken language of the islands, Bislama, is an English-based Creole. I welcome readers’ corrections if I have erred in any of these selections.

The map uses color intensity to try to convey the international significance of these languages. English is thus in the darkest shade, reflecting the fact that it has official standing in more countries than any other language. Arabic, French, and Spanish are depicted with a somewhat lighter hue, and Portuguese lighter still. The lightest color is used for Dutch (depicting the Netherlands, Belgium, and Suriname), which barely makes the list.

The data on which the map is based are derived from the Wikipedia table posted here. I should also note that countries are not divided: Puerto Rico, a U.S. dependency, is thus mapped as English speaking despite the fact that Spanish is the more widely spoken official language on the island.

It is of note that most countries use one of these eleven international languages at an official level. The main areas of exception are eastern and northern Europe, Central Asia, and mainland Southeast Asia.