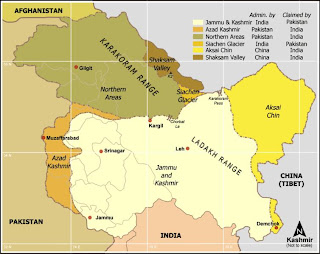 The former princely state of Kashmir is one of the world’s most contested territories (see map). During the British colonial period, Kashmir was ruled by a Hindu Maharaja (under British “advisement”) even though its population was (and is) mostly Muslim. The political partition of British India into the independent states of India and Pakistan in 1947 saw the partitioning of Kashmir as well, with India gaining control over the core areas and Pakistan gaining power over the north and far west. In 1962, China grabbed parts of the far north after defeating India in a short war.

Pakistan divided its portion of Kashmir into two zones: Azad Kashmir (“free Kashmir”) in the west, and the Northern Areas. The Northern Areas were originally a non-self-governing area under Pakistani control, and have generally not been regarded by the international community as a part of Pakistan proper. India, for its part, has maintained that all of the former princely state of Kashmir is rightfully Indian territory.

This situation changed somewhat in August 2009, when Pakistan renamed the Northern Areas Gilgit-Baltistan and allowed the election of a local legislative assembly. A month later, Pakistan signed an agreement with China for the building of a massive dam and hydro-electrical facility in the area.

Indian authorities were further angered in December 2009 when the region’s newly elected chief minister declared that Gilgit-Baltistan was now Pakistan’s fifth province, and that it had “no connection to Kashmir.” An Indian spokesman retorted that “The entire state of Jammu and Kashmir is an integral part of India by virtue of its accession to India in 1947. Any action to alter the status of any part of the territory under the illegal occupation of Pakistan has no legal basis, and is completely unacceptable.” A Pakistani official then replied that Gilgit-Baltistan merely enjoys a “special status,” as its legislative assembly cannot pass laws. Gilgit-Baltistan is now best regarded as a de facto but not a de jure province of Pakistan.

Unfortunately, Gilgit-Baltistan has recently witnessed an upsurge of sectarian violence between Sunni and Shia Muslims. Sunni stalwarts, who wanted the area to merge with Azad Kashmir, were not happy when the Shia-majority region was awarded a province-like status. According to journalist B. Raman, Pakistan’s powerful “Inter-Services Intelligence (ISI) had over the past years encouraged and helped Sunni extremists organizations … to set up a presence in the Gilgit area.” (http://www.srilankaguardian.org/2009/12/sectarian-terrorism-in-pakistan-during.html).

Whatever its geopolitical status and religious tensions, Gilgit-Baltistan has made great educational strides in recent years. This extremely rugged, remote region had negligible levels of literacy thirty years ago. In 1998, adult literacy had reached 38 percent, and by 2006 it had risen to 53 percent. In many areas, most boys and girls now attend school, often learning their lessons in English. Most observers credit the gains largely to the Geneva-based Aga Khan Foundation. Many residents of Gilgit-Baltistan are Ismaili Muslims, members of a highly cosmopolitan and education-oriented sect of Shia Islam that is headed by the Aga Khan. Also significant are the philanthropic efforts of U.S. author and mountaineer Greg Mortenson, author of the acclaimed book Three Cups of Tea. The region also supports a high-quality English language news site, the Dardistan Times (http://dardistantimes.com/) (“Dardistan” is itself an interesting geographical appellation, but that is a topic for a later post.)