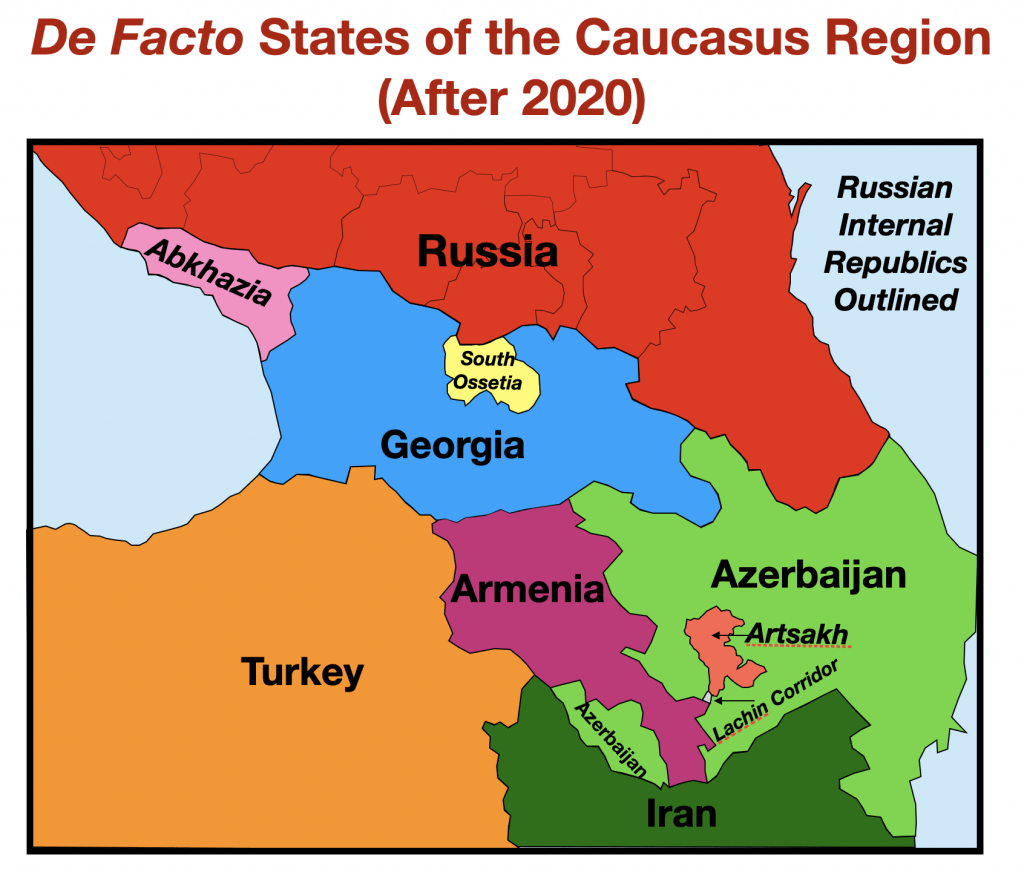 Thus far we have looked at cases where the official U.S. government map has persisted in showcasing lapsed, divided, or phantom nation-states. Another way that is misleads is by not representing a class of functional states: those whose existence is officially denied by the international community.[1] Such polities have been called “de facto states” by Scott Pegg, who deems them the “flip side of the quasi-state coin.”[2]

Perhaps the clearest example of a de facto state that is consistently left off the map is Somaliland, a breakaway polity that proclaimed its independence from a disintegrating Somalia in 1991. In the decades since then, Somaliland has attained all the essential attributes of sovereignty except international recognition.[3] Remarkably, it has been described as the most stable and best-governed country in the Horn of Africa.[4] Nor has this gone unnoticed. Israel, Ethiopia, and the United Arab Emirates (UAE) come close to treating Somaliland as a sovereign state, while Djibouti, Turkey, and Denmark maintain consulates or their equivalent in the country. Wales has even awarded it full acknowledgement.[5] The UAE, in return for being allowed to establish a naval base, has gone so far as to promise to “protect the Republic of Somaliland from all external threats and protect Somaliland’s sovereignty and territorial integrity,” [6] wording that echoes many declarations of formal recognition. The African Union, by contrast, vociferously rejects Somaliland’s claims. The resistance is understandable. Acknowledging any breakaway polity could encourage similar developments elsewhere in the volatile region. 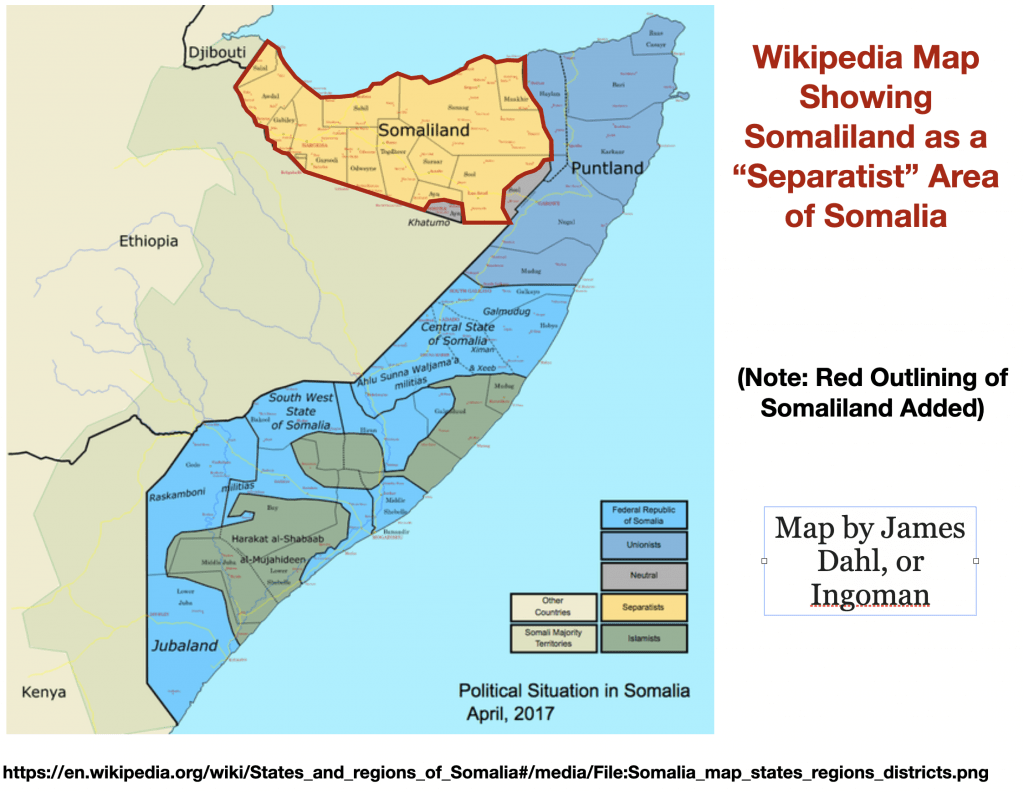 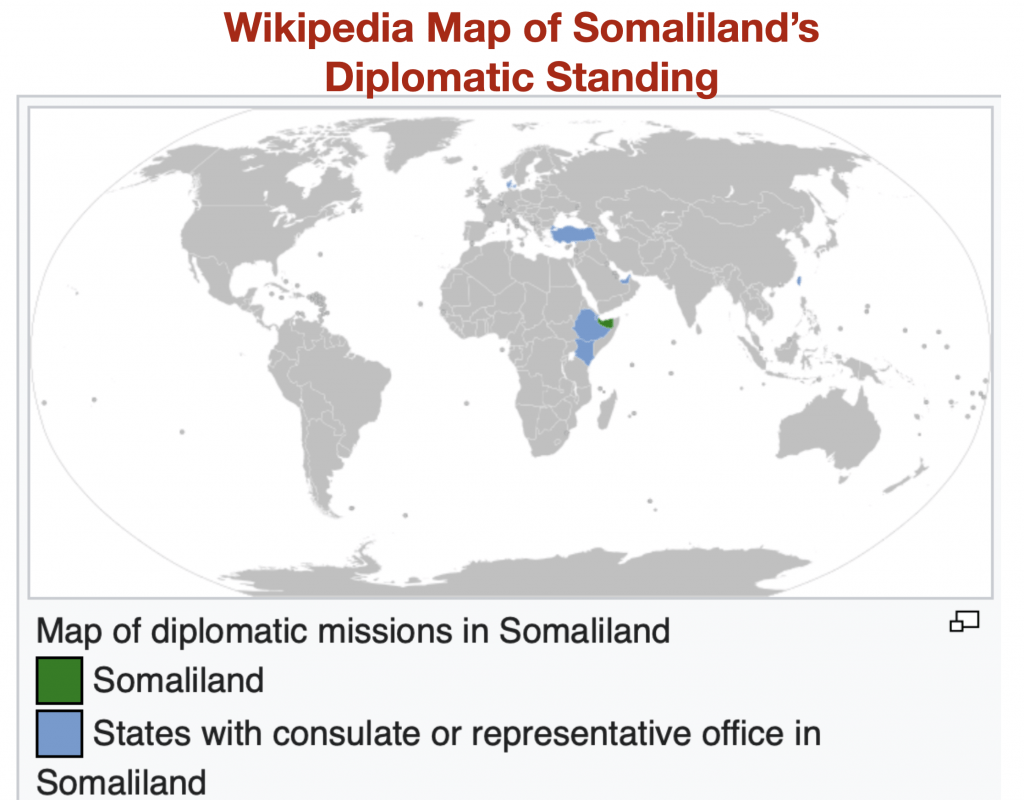 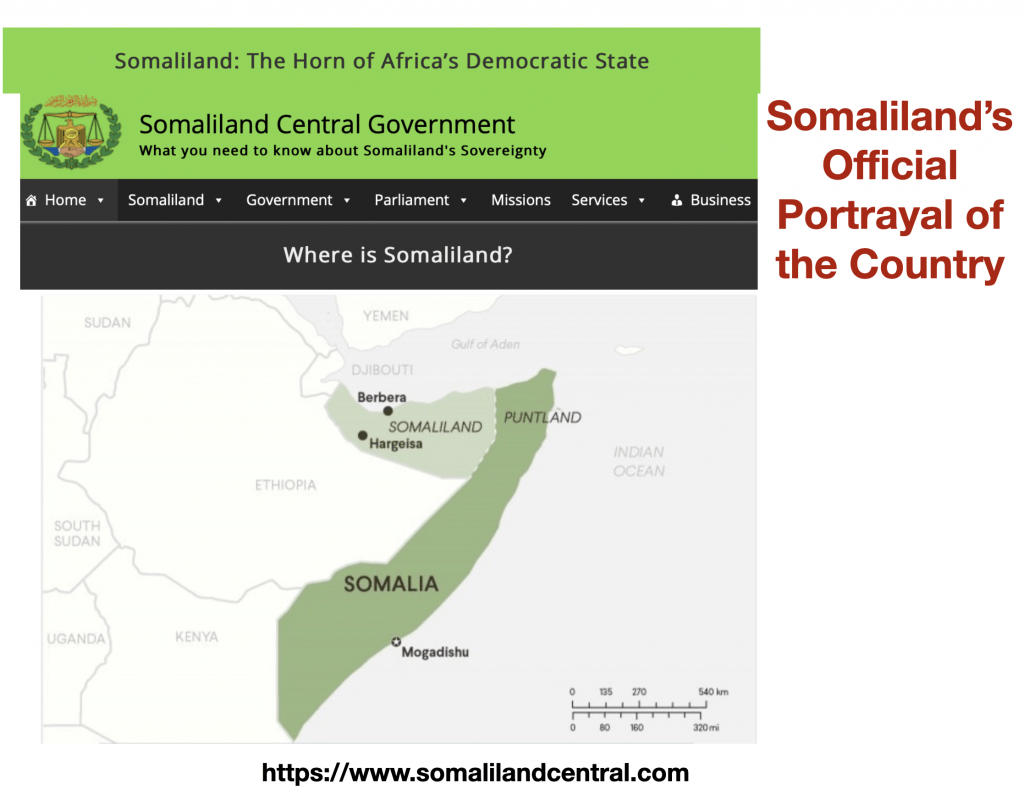 While Somaliland may be a particularly clear example of the cartographically invisible states, it is by no means the only one. The most important of these, Taiwan, is also the most complicated and will be examined below. The others have powerful patrons, whom they effectively serve as clients. An extreme example is the Turkish Republic of Northern Cyprus, a self-ruling entity that enjoys the recognition of exactly one UN member: Turkey. (Not surprisingly, it is often regarded as a Turkish puppet, especially in Greece.[7]) But several autonomous zones of the former Soviet Union operate in a similar gray area, enjoying some diplomatic recognition while arguably lacking full independence. Abkhazia and South Ossetia, for example, are militarily and diplomatically supported by Russia and officially recognized by Venezuela, Nicaragua, Syria, and Nauru. Transnistria—a self-declared sliver of a state sandwiched between Ukraine and Moldova —has a more shadowy existence. With an economy based heavily on smuggling and weapons manufacturing, it is sometimes regarded as little more than gangster turf.[8] Transnistria relies on Moscow to maintain its autonomy. Nagorno-Karabakh, in the Caucasus, is comparably dependent on Armenia. Despite having proclaimed independence as the Republic of Artsakh (an entity recognized by nine U.S. states, if not by Washington DC),[9] it is essentially administered as part of Armenia, with its citizens using Armenian passports.[10] 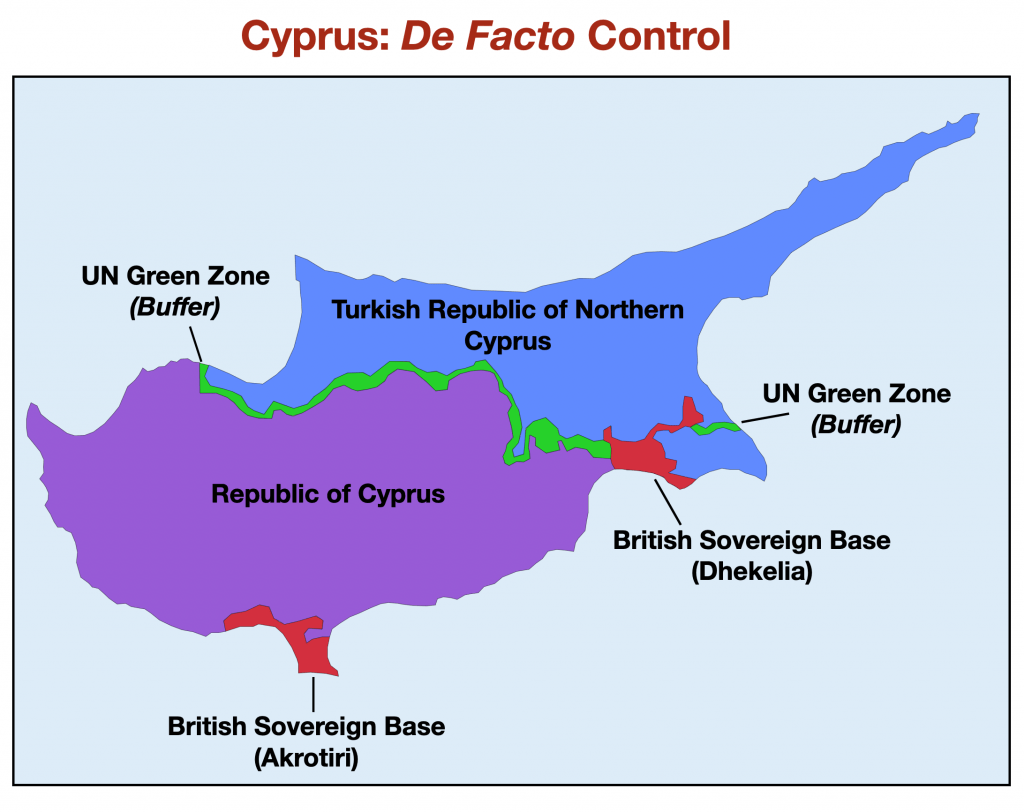 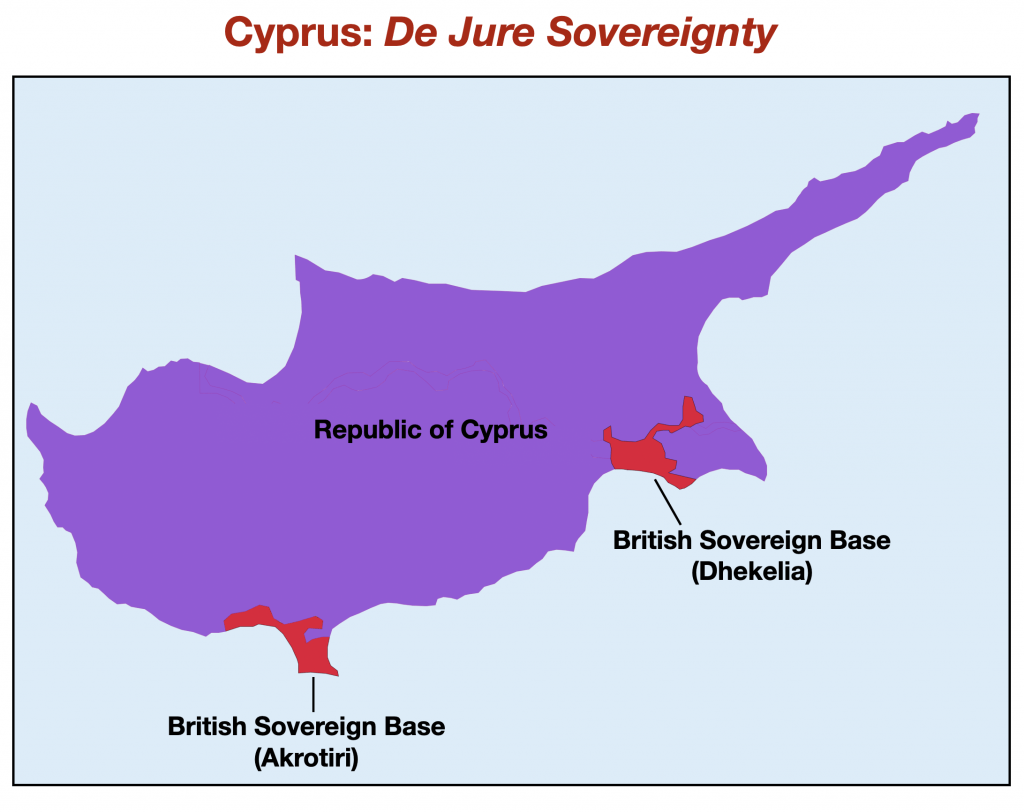 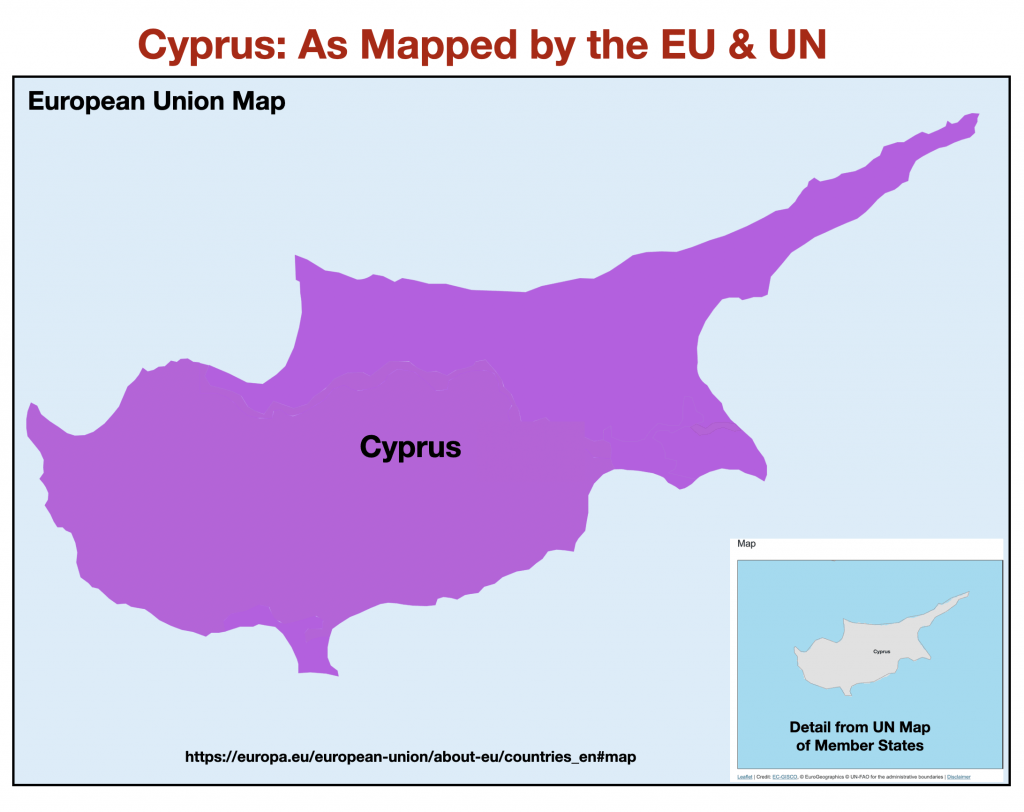 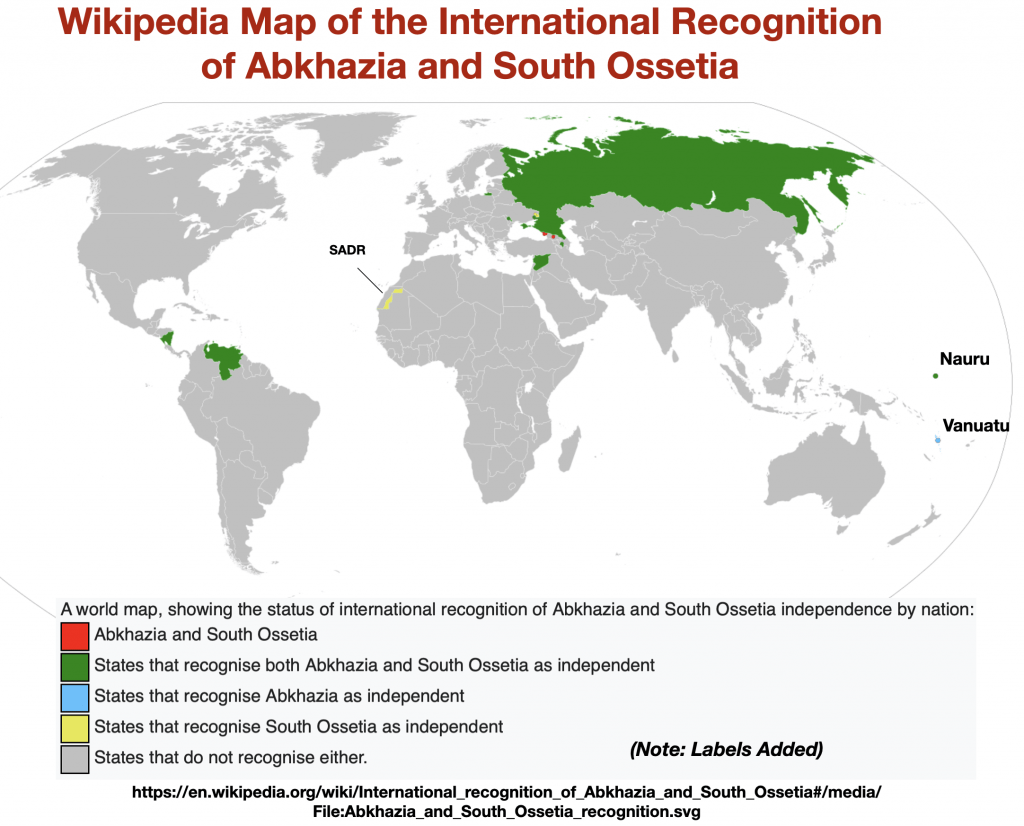 Rebuffed by the global community, these four post-Soviet breakaways responded by creating their own “international” organization, the ambitiously named Community for Democracy and Rights of Nations (a.k.a. the Commonwealth of Unrecognized States).[11] Diplomats from Abkhazia, South Ossetia, Transnistria, and Nagorno-Karabakh have met periodically under its auspices, as if in pantomime of the United Nations. They have not been joined by representatives from the two newest self-declared states in the region, the Donetsk and Luhansk Peoples’ Republics, whose leaders have discussed merging their statelets to form something they call the Federation of Novorossiya (“New Russia”). Regarded as terrorist organizations by Kiev,[12] both of these “republics” were hived off of eastern Ukraine in 2014 by Russia-oriented separatists, aided by the Russian military. 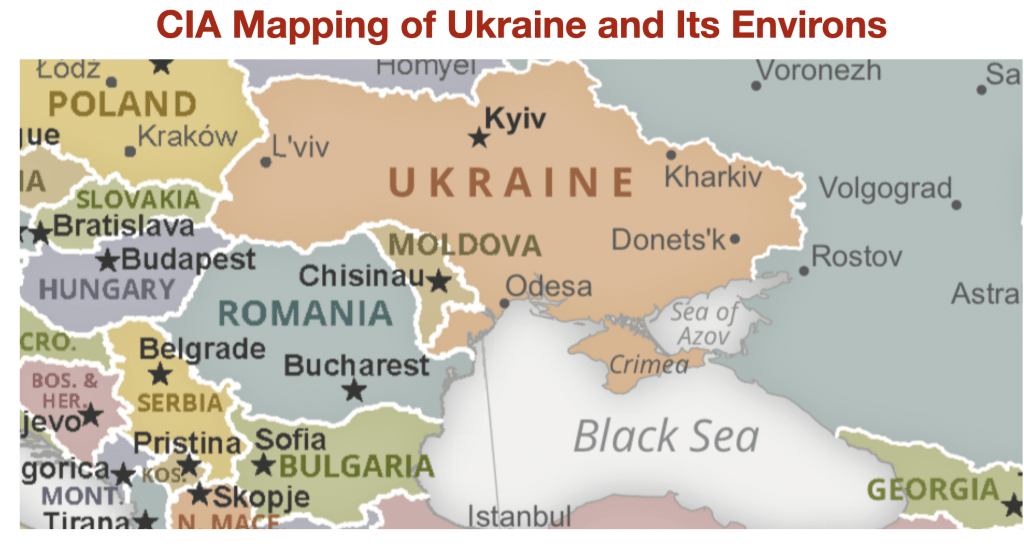 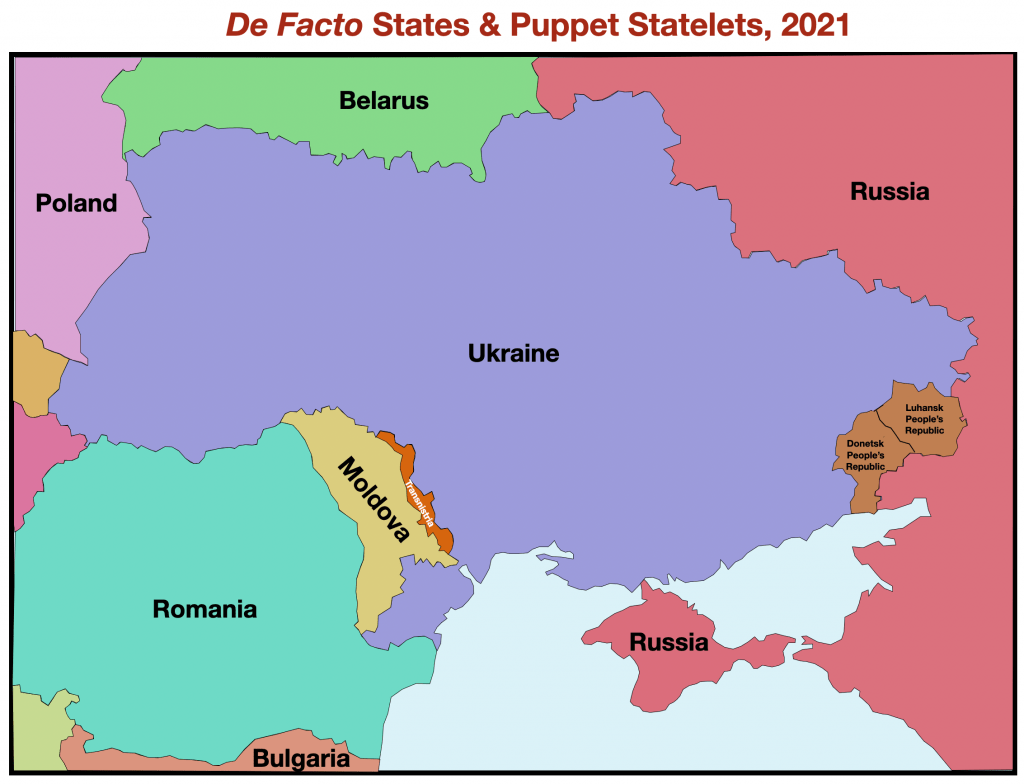 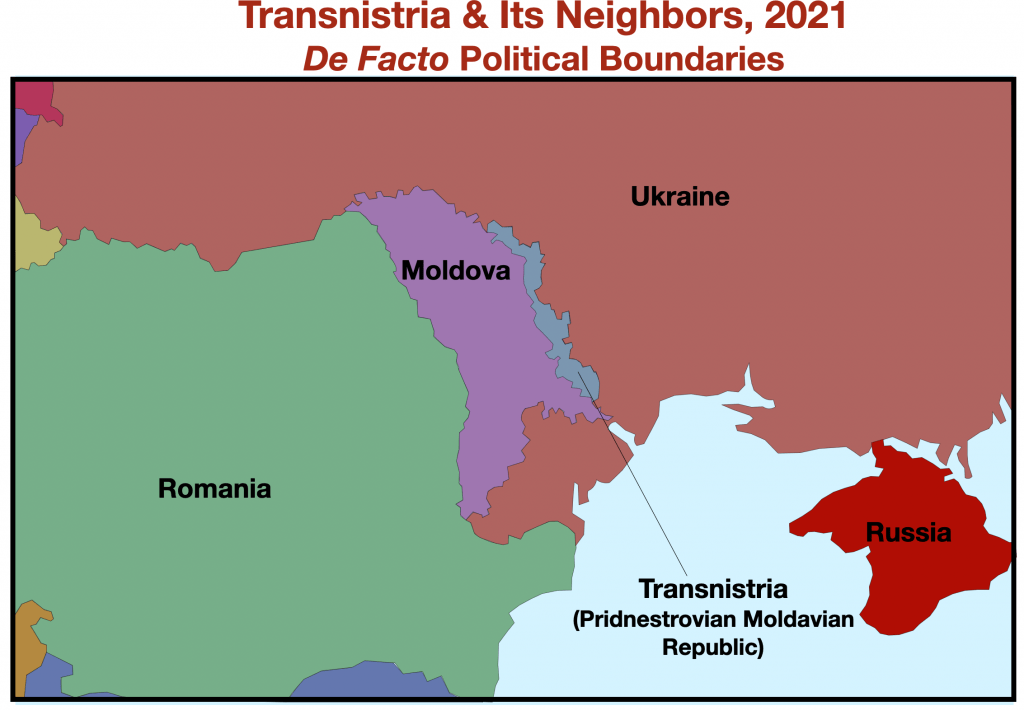 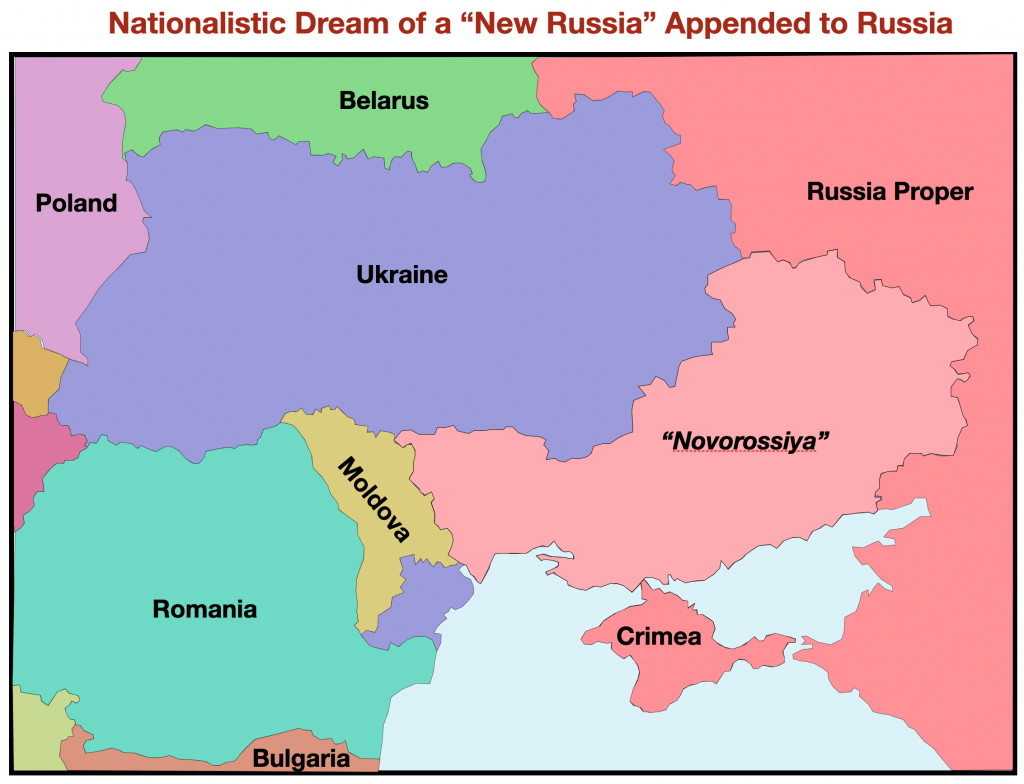 Whatever one makes of these splinter polities,[13] their existence makes one thing clear: not all of the internationally recognized states that emerged out of the Soviet Union fully control the territories ascribed to them by the standard map. Unable to prevent the break-out of Abkhazia, South Ossetia, Transnistria, and Nagorno-Karabakh (Artsakh), the “parent” republics of Georgia, Moldova, and Azerbaijan have never exercised authority across their own full official expanses. Immediately on gaining independence from the Soviet Union in 1991, all these fledgling countries saw border-altering struggles. While commonly deemed frozen conflicts,[14] they occasionally burst into bloodshed. Azerbaijan engaged in an inconclusive four-day struggle against Armenia and its client state of Artsakh (Nagorno-Karabakh) in 2016, and triumphed against them in a much more deadly war in 2020. After the latter struggle, Azerbaijan reclaimed more than half of the territory that it had lost to Armenia when the Soviet Union disintegrated. Yet all of these territorial changes go unmarked on the CIA map, which references instead the old internal political boundaries of the USSR, which in these instances have never served as de facto international divides. Like the 2014 Russian annexation of Crimea, such border changes are judged illegitimate and therefore ignored. What is frozen would seem to be the map, not the conflicts. 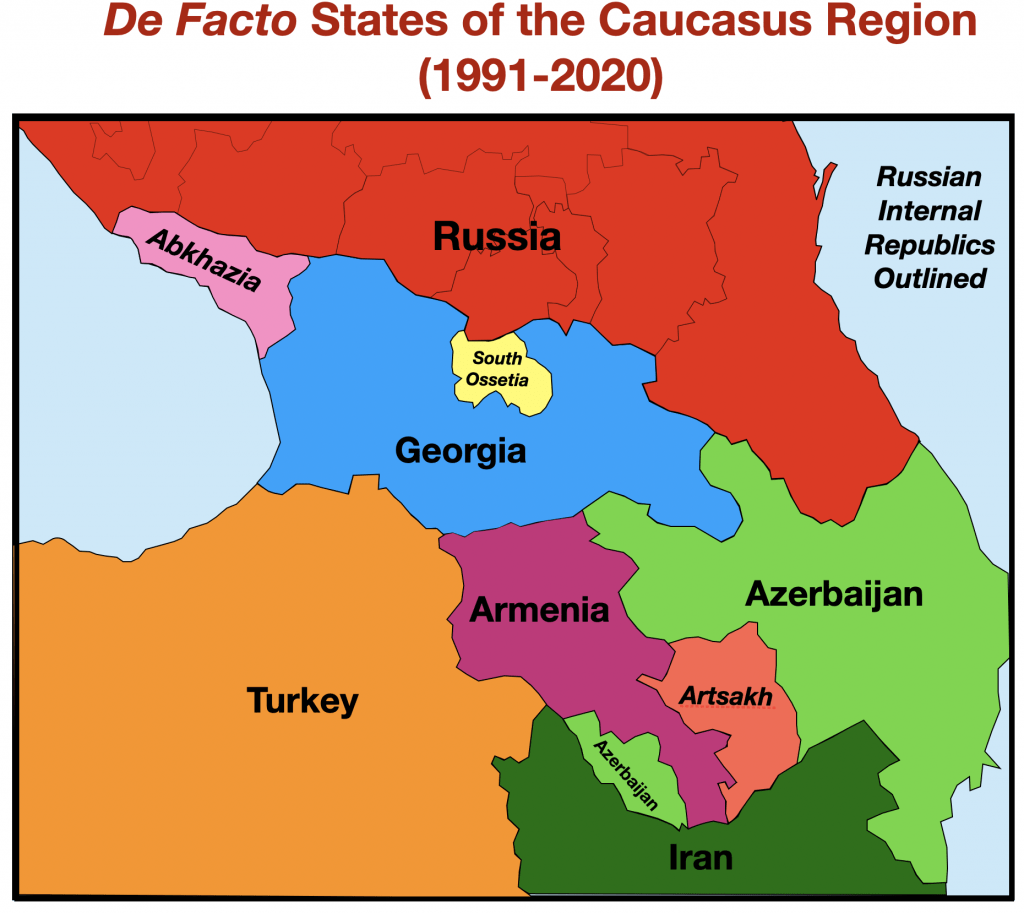 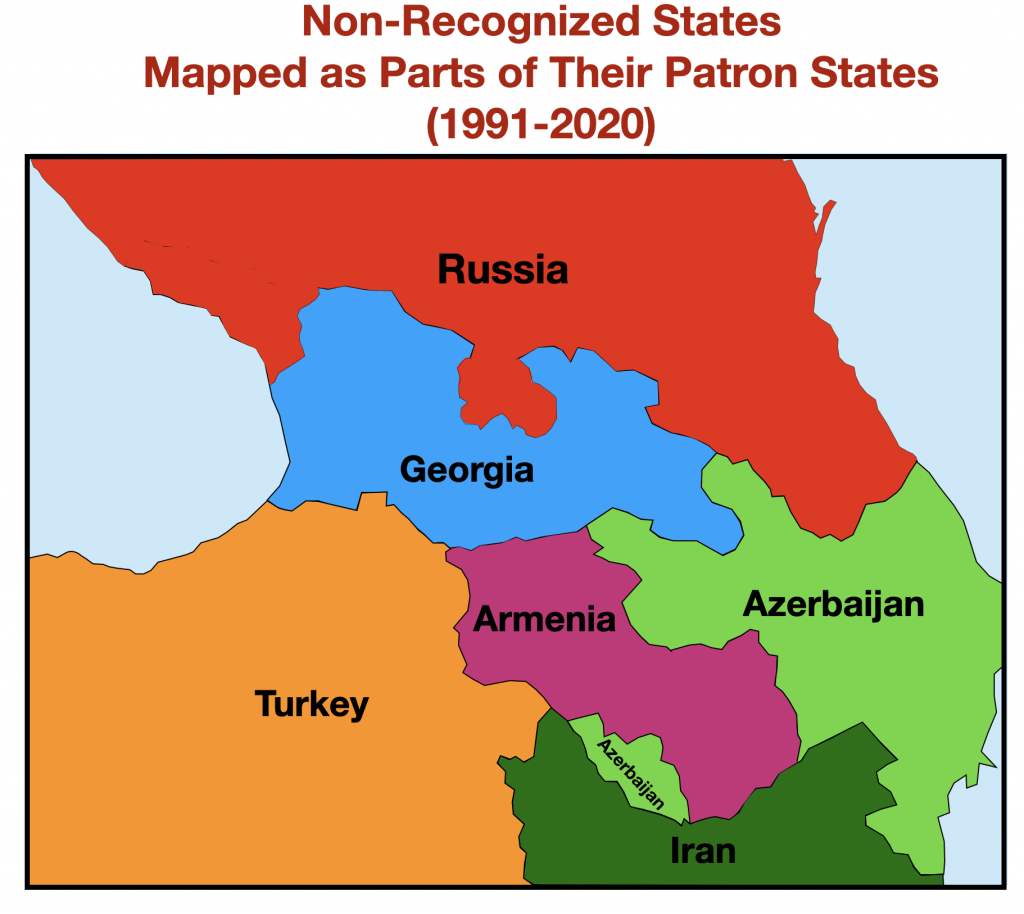 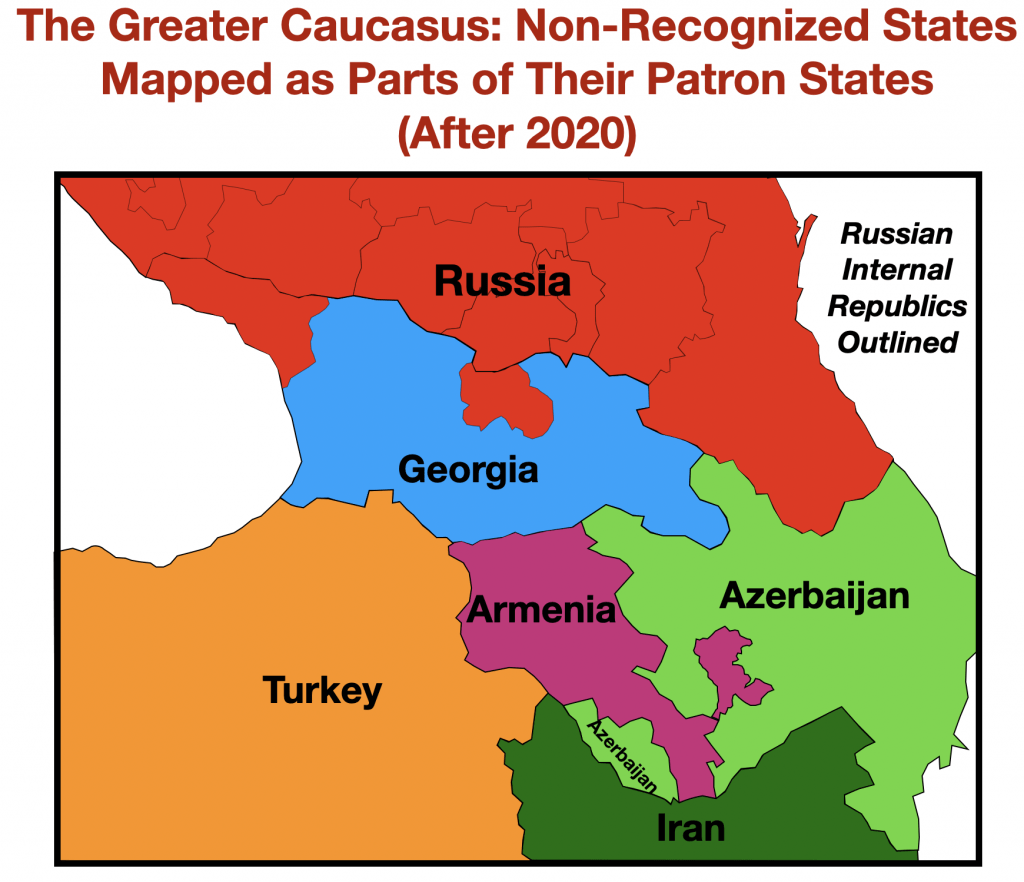 While the moral logic behind this refusal of diplomatic recognition is understandable, the public still needs some way to keep track of whose boots are on the ground. Some of these unrecognized states have endured for decades and may well persist for decades or more to come.[15] For the CIA map to be truthful, it should come with the caveat that it represents an idea of the world: a vision rooted in the world-order from the last century.

Somaliland is also somewhat democratic and moderately free, besting on this score several of Africa’s recent stars of economic development, such as Rwanda and Ethiopia. Freedom House rates Somaliland only as “partly free,” but it is the only country in the northeastern quadrant of Africa to receive that designation, the other being rated as “not free.” (See Freedom House, Somaliland, Freedom of the World in 2020:https://freedomhouse.org/country/somaliland/freedom-world/2020. Nina Casperson, however, notes that in Somaliland, “the need for unity and the avoidance of internal strife has undermined what are otherwise significant democratic achievements (2012, p. 93).

[5] “Somaliland: Wales Strikes Out on Its Own in Its Recognition of Somaliland,” Unrepresented Nations and Peoples Organization, March 6, 2016:

But as Wales is a non-sovereign polity, such recognition is merely symbolic.

[6] The quotation is from “Somaliland, UAE Sign Historic Economic and Military Pact,” The National, March 21, 2017:  http://www.thenational-somaliland.com/2017/03/21/somaliland-uae-sign-historic-economic-military-pact/

[8] This view of  Transnistria (formally called the Pridnestrovian Moldavian Republic) is articulated by Glenny (2008, p. 91). Nina Caspersen argues that such a depiction is unduly “alarmist”; Caspersen (2012, p. 46).

[11] As little is available on this organization in English, I recommend the Wikipedia article: https://en.wikipedia.org/wiki/Community_for_Democracy_and_Rights_of_Nations

[15] On the assumption of impermanence, see Caspersen (2012, p. 103). As Pegg notes, “there is little incentive to devote much attention to de facto states because their ultimate defeat and reincorporation into existing states is both assumed and sought” (1998, p. 8).