Seek and Thou Shall Fiend: French Satirical Maps 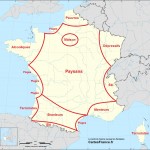