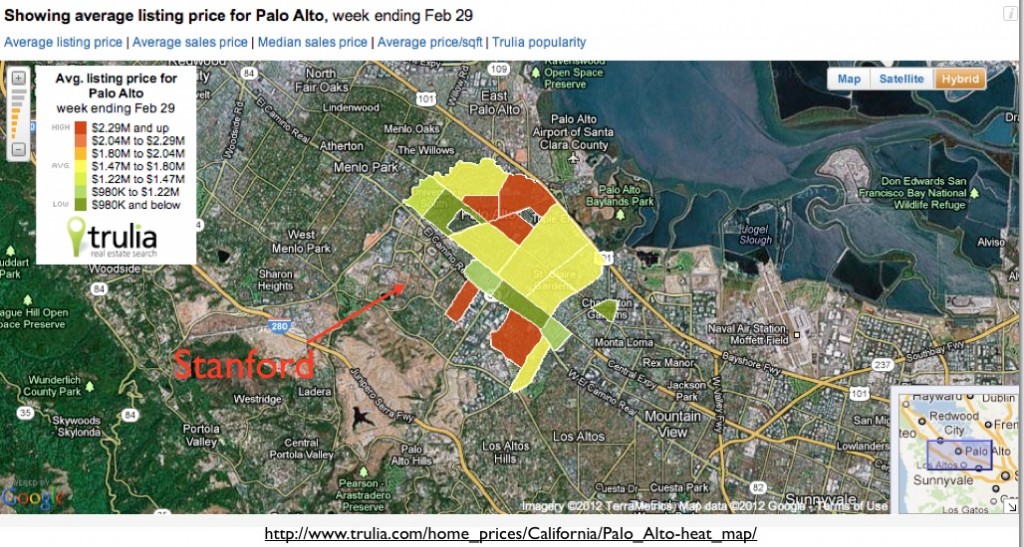 As the previous post noted, the new environmental consensus calls for urban intensification to reduce of greenhouse gas emissions and preserve rural landscapes. In the San Francisco Bay Area, such an ideal has been widely embraced in principle by both leading environmental groups and regional associations. The 2007 housing report by ABAG, the Association of Bay Area Governments, opens by summarizing the new perspective:

After decades of development of auto-oriented communities, support is growing for more traditional styles of development. In particular, there is increased support for more compact communities near public transit that are not focused around the demands of the automobile. There is a growing demand for homes in areas that include jobs, shops, and services close to transit so that people can walk, bike or take public transit, in addition to using their car.

Propelled by market forces and influenced by the new paradigm, in-fill developments have sprouted over many parts of the Bay Area in the past decade. But the pace of redevelopment has been frustratingly slow.  Most communities are resistant, especially to large projects, and even those plans that are approved often have to fight through years of environmental litigation. 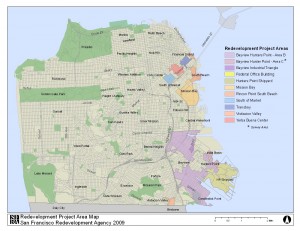 A prime case is the proposed transformation of the shuttered Hunters Point Naval Shipyard in southeastern San Francisco. For over a decade, city agencies have been working with a private firm to remove environmental contaminants and begin building a new community that is supposed to eventually hold over 10,000 homes. Resistance from environmental and neighborhood groups, however, has brought repeated delays. In 2008, a solid majority of San Franciscans voted to proceed with the development, but lawsuits prevented groundbreaking. In July 2011, a Superior Court gave a tentative go-ahead, but a month later, an Earthjustice legal maneuver once again brought everything to a standstill. At that time, a California Superior Court ruled than that project could not proceed until the remediation of toxic substances had been completed. As the complete removal of all hazardous chemicals is all but impossible, it seems likely that the Hunter’s Point project, like most other local brownfield redevelopment schemes, will continue to be deferred for years if not decades.

In the Silicon Valley community of Palo Alto, adjacent to Stanford University, resistance to urban intensification reaches an extreme. Even the smallest developments encounter strident opposition. A recent case is the proposed Lytton Gateway project. A February 24, 2012 article in the Palo Alto Weekly made it seem as if proponents of the “new urbanism” had scored a major victory in pushing through the project, noting that:

An ambitious proposal to build a five-story building featuring … offices, apartments, and a coffee shop at one of downtown Palo Alto’s most prominent corners took a major stride toward winning the city’s approval … when the Planning and Transportation Committee agreed to rezone the site to make the project possible. 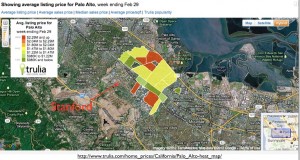 Ambitious? The Lytton Gateway plans call for all of fourteen apartments. But even that miniscule number was too large for many local activists, who argued that the new residents would take up too much parking. The developers addressed the problem head on, promising to provide ample additional parking and even to “buy Caltrain Go Passes for all of the buildings tenants … and to provide two electric-vehicle charging stations.” (A Caltrain station is in easy walking distance from the project.) Such inducements, however, were not enough for several members of the committee, who voted against the proposal.

In Palo Alto, parking scarcity is one of the main weapons used against urban intensification. By forcing developers to provide ample parking, often underground, anti-urbanists push up building costs, discouraging development. Ironically, they also guarantee that new developments remains focused on the personal automobile, undermining a keystone of the new urbanism. But I wonder whether parking is really the overriding issue; the developers of Lytton Gateway, after all, promised to provide many new car-slots, yet they still encountered heated opposition. In the end, it seems that many Palo Alto residents simply do not want newcomers in the community. More than a few seem to be especially suspicious of those who cannot afford Palo Alto real estate. Half of the Lytton Gateways residential units are to be designated as “affordable housing,” accessible, in other words, to teachers, police officers, nurses, firefighters and other community servants. 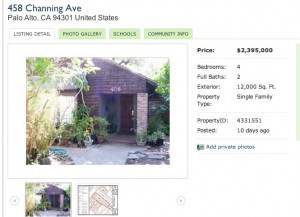 Although high-density residences are extremely difficult to build in Palo Alto, another kind of housing development is commonplace. Single-family houses are continually being torn down and replaced by much larger buildings. But as the new structures are almost invariable single-family houses themselves, no net gain is realized in urban intensity. A March 2 full-page advertisement in the Palo Alto Weekly encapsulates the story. It trumpets an “outstanding opportunity to build in the Downtown/Professorville neighborhood on this 12,000 sf [square foot] lot…” As a seeming afterthought, the ad also mentions that, “The property is being sold as land value, but it does contain a 1,687 sf 4 bedroom, 2 bath home.” In downtown Palo Alto, in easy walking distance to a thriving commercial district as well as a commuter rail line, a house so modestly proportioned is often nothing but a “teardown,” a nuisance structure that adds no value to the underlying land. In this instance, the 12,000 square-foot lot is being offered at $2,395,000. Needless to say, few professors reside in Professorville these days.

In the end, the opposition to urban intensification in Palo Alto and neighboring cities is driven not so much by genuine environmental concerns as by property-value considerations, which are themselves coupled with the desire to maintain pleasant, low-density, carbon-intensive suburban neighborhoods as they are. Local environmental activism thus serves as a cover for a status-quo-maintaining, exclusionary, upper-class-based politics. In several respects, Palo Alto’s firmly Democratic-Party voting record belies a local political sensibility that could only be described as deeply conservative.