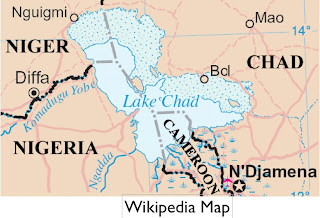 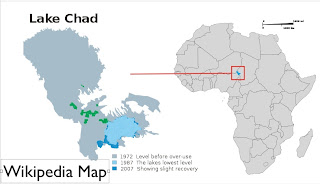 Unrest in the Bakassi Peninsula should not blind us to the fact that the Nigerian and Cameroonian governments have peaceably settled a long-standing dispute that once threatened to break into war. With UN help, the two countries are setting up 3,000 pillars to demarcate their border, a process that is scheduled to be completed in 2011. And as Africa: The Good News reports,“The military forces of the two countries are holding joint training, and they are considering joint patrols in the Gulf of Guinea to discourage piracy.”

Boundary demarcation has been especially problematic in the Lake Chad area, where Nigeria, Cameroon, Niger, and Chad converge, owing partly to the lake’s drastic fluctuations. The Lake Chad Commission, which attempts to regulate local water resources, has pushed forward a boundary delimitation treaty, but thus far only Nigeria and Cameroon have ratified it. According to GlobalSecurity, “Chad rejects [the] Nigerian request to redemarcate [the] boundary, the site of periodic cross-border incidents.” 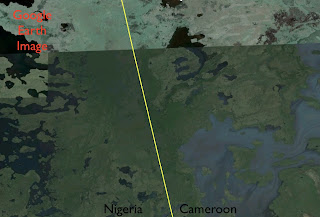 A larger concern is the lake itself. With no outlet to the sea, Lake Chad naturally waxes and wanes depending on the balance between precipitation and evaporation in its drainage basin. All such endorheic lakes fluctuate in size, but Chad’s variations are especially pronounced, owing largely to the fact that it is only about five feet (1.5 meters) deep on average. As recently as 1983, Lake Chad covered more than 10,000 square miles (26,000 square kilometers), but by 2000 it had been reduced to around 580 square miles (1,500 square kilometers). Satellite imagery indicates that the lake has expanded since then, but measurements remain disputed. As the Google Earth image posted above shows, much of the basin is a complex mixture of wetlands and pools, making it impossible to precisely delineate the lake’s expanse.

The desiccation of Lake Chad, like that of the Aral Sea, is a tragedy for both its human communities and its once-abundant wildlife; unlike that of the Aral Sea, the plight of Lake Chad is seldom mentioned in the global media. The diminishment of Lake Chad is also much more poorly understood than that of Central Asia’s large undrained lakes. Increased human population and irrigation expansion in the drainage basin have played major roles, but do not offer a full explanation. Overgrazing has also been implicated, but many experts suspect that climate change is the major culprit. One commentator also blames the “infestation of aquatic weeds,” particularly typha (cattail), arguing that “Typha is a dessication machine and a siltation machine. Clear it, and the silt it has deposited from the lake and its tributaries and the problems will correct themselves. Typha is all biomass, ideal for ethanol production, some of it fit for human consumption.”

Although it has generally been overlooked by the media, Lake Chad has received the attention of the global environmental community. In early 2010, environmentalists welcomed the news that the lake had finally been “declared a wetland of international importance under the 1971 Ramsar Convention on Wetlands.” The new internationally protected area covers 6.4 million acres (2.6 million hectares), although, as organizers of the protection effort admit, it will be a challenge to “turn the promise of protection for Lake Chad into a reality for the millions that depend on it.”

Concerns about the fate of Lake Chad are of long standing. In the 1960s, proposals were made to divert water from the Ubangi River, a tributary of the Congo, into the Chad basin. In 2008, the governments of the Niger, Nigeria, Chad, and Cameroon pledged support for the diversion project. Some local scholars are enthusiastic. According to Lawan Maina of the Department of Geography at the University of Maiduguri in Borno State, Nigeria, if the Ubangi were to be diverted, “Fish-stocks would be revitalised, intensive irrigation farming could be undertaken in order to produce important crops, livestock will be healthier, and the Lake Chad’s tourism potentials could then be fully exploited. These will result in the creation of employment opportunities for the local population, member states will witness an increase in foreign exchange and perhaps even food security in the entire West African region will be further guaranteed.”

Diverting water from the Ubangi River to the Lake Chad Basin would, however, be an expensive proposition, and would also require the full commitment of the Central African Republic, where the main hydrological engineering works would be situated. It would also likely cause environmental problems of its own. But considering the importance of Lake Chad, a vast lake and wetland system sitting in a deeply impoverished area near the edge of the Sahara, the desire for such a project is understandable.