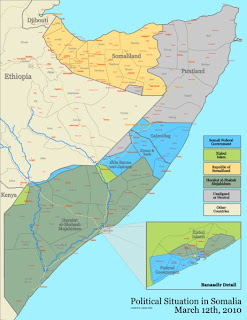 Although Somaliland is well governed when contrasted with the rest of Somalia, all is not well in the breakaway republic. On May 4, 2010, StrategyPage warned that “Somaliland is sliding towards civil war.” Such an assessment may be unduly harsh, but Somaliland’s much-touted democracy did lose some credibility recently when a government-run radio station linked the main opposition party to Al Shabaab, the extreme Islamist militia inflicting havoc across southern and central Somalia. The opposition group denied the allegation, arguing that the report had “seriously dinted [sic] the image of top figures in Somaliland’s political landscape.” More troubling in the long run has been the failure to hold elections after Dahir Rayale’s presidential term expired in May 2008. Yet another postponement in September 2009 brought threats of a political boycott by rival parties.

Despite such problems, Somaliland’s election appears to be on track for June 2010. Official ballot boxes arrived from Denmark on April 19, and biometric voter registration cards are currently being issued. One of the main campaign issues is the country’s lack of international legitimacy. Candidate Faisal Ali Warabe has promised that, if elected, he will make the breakthrough: “The name Somaliland is not even known in 10 countries in Africa, and I will guarantee the people of Somaliland that if I am elected as the next President of Somaliland I will promise that I will achieve recognition for our country, and my words are final and by doing this I will do all means and ways and I know easy tricks to do that.”

Gaining even limited international recognition will likely prove more difficult than Faisal Ali Warabe anticipates. But it is not entirely out of the question. In March 2010, reports circulated that Israel was considering recognizing the de facto country. Such rumors provoked the Arab League – of which Somalia is a member, despite its miniscule Arab population – to call vaguely for “diplomatic action” against Israel. The Egyptian government in particular has reacted firmly: “Egypt is a friend of the Somali people,” proclaimed Cairo’s ambassador to Somalia, “[and] it will never allow the disintegration and division of Somalia.” The fact that Somalia did indeed disintegrate in 1991 and has been divided ever since has apparently made little impression on the ambassador.

Some high-level members of the United States military establishment have floated the idea of recognition. In 2007, Defense Secretary Robert Gates discussed the issue on a visit to neighboring Djibouti, a key U.S. ally in the volatile region. “Somaliland is an entity that works,” reported a senior defense official. Another official supposedly claimed that the Pentagon favored formal acknowledgement: “Somaliland should be independent… We should build up the parts that are functional and box in Somalia’s unstable regions, particularly around Mogadishu.” The State Department, however, disagrees strongly. Not wanting to be seen as meddling in African affairs, the U.S. government has consistently deferred to the African Union, which rejects recognition. As Assistant Secretary of State Jendayi E. Frazer put it, “We do not want to get ahead of the continental organization on an issue of such importance.”

Somaliland’s closest relations are with neighboring Ethiopia. Landlocked Ethiopia depends heavily on Somaliland’s port facilities in Berbera, and seeks to leverage its influence in Somaliland to counter the threat of radical Islamists elsewhere in the region. In June 2007, an official Ethiopian communiqué referred to the leader of the breakaway republic as the “President of Somaliland,” implying sovereignty. But as long as the African Union denies recognition, Ethiopia – home of the AU’s secretariat ­– is unlikely to formally grant it. The same is true of the European Union and its member states.

Somaliland faces additional challenges in its struggles against Puntland, another governmental entity that has emerged out of the wreckage of Somalia.More on that in tomorrow’s post.