Articles tagged with: insurgency and pornography 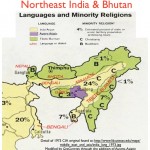