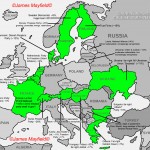 Pertaining to the post below, the map shows the diminution of Hungary that occurred after the signing of the Treat of Trianon, while the dual images show the use of the pre-Trianon map as a political icon