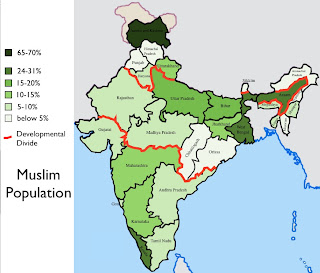 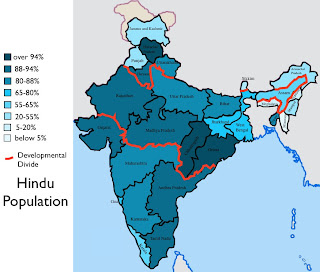 Discussions of economic and social development in India often raise the question of religious diversity. As the Wikipedia table reproduced above shows, India’s Muslim minority has a substantially lower literacy rate than its Hindu majority, as well as a higher birthrate. On average, Indian Muslims tend to be poorer than members of other religious communities. In fact, some are calling for Muslims to be included within India’s system of “reservations,” or quotas established for people of low-caste background in educational institutions and government employment. One official commission has recently advocated a 10 percent allotment for Muslims seeking government jobs, following a policy already established at the state level in southern India. As reported by the Times of India, “Tamil Nadu has 3.5 per cent reservation for Muslims within 27 per cent quota for backward castes, while Congress-ruled Andhra Pradesh has given 4 per cent reservation to Muslims, which was also upheld by the Supreme Court.”

Yet as the maps posted above indicate, there is no clear linkage in India between the geography of religion and that of development. On the one hand, almost half the country’s Muslims live in the three relatively poor north-central states of Uttar Pradesh, Bihar, and West Bengal. Many educated Muslims from this area fled to Pakistan after the partition of British India in 1947, leaving behind the poorer segment of the community. But in many other parts of India, the social and economic standing of the Muslim community is substantially higher. Jammu and Kashmir, the country’s only Muslim-majority state, ranks relatively high on a number of socio-economic indicators. In Kerala, where a quarter of the population follows Islam, the Muslim literacy rate approaches 100 percent, tracking consistently with that of state’s Hindu and Christian communities.

As we have seen, Kerala’s development indicators are extremely high across the board. A generation ago, Kerala stood out even more starkly, having achieved elevated rates of literacy and public health—and low levels of fertility—well before other Indian states. Kerala’s achievements have often been credited to its history of socialist government, which has resulted in heavy investments in education and health. The “Kerala model of development,” however, has also been criticized for generating labor strife and staunching industrial growth, forcing many highly educated Keralites to seek employment elsewhere in India or abroad.

Although Kerala-style socialism resulted in considerable class tension, the state historically enjoyed calm relations among its religious groups (Kerala is roughly half Hindu, a quarter Muslim, and a fifth Christian). In recent years, however, religious conflict has intensified. On July 4, 2010, a Christian professor who had been accused of blasphemy by a prominent Muslim organization was attacked in broad daylight by an enraged mob, which cut off his right hand. One the same day, two men were arrested on suspicion of organizing the attack; both were connected with the Popular Front of India, a southern Indian Muslim organization with a reputation for extremism. Shortly afterward, local police launched several raids on offices connected with the group. In one, they “found bombs, swords, iron pipes and objectionable leaflets in a vacant building that was suspected to be used by Popular Front activists.”

On other recent occasions, Kerala’s Christian, Muslim, and Hindu religious leaders have found common cause in objecting to initiatives from the state’s secular political and educational establishments. A recent dispute focused on a social studies textbook that was deemed anti-religious. The objectionable passage, a brief dialogue set in a public school, is worth quoting in full (note that the father’s name is Muslim, the mother’s Hindu):

The headmaster raised his head, looked at the parents and asked:

“Which religion should we write?”

“None. Write there is no religion.”

The headmaster leaned back in his chair and asked a little gravely:

“What if he feels the need for a religion when he grows up?”

“Let him choose his religion when he feels so.”