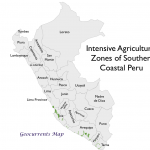 In writing about the fruit and vegetable exports of coastal Peru, I could not locate any on-line maps of the farming districts of the region. It is easy, however, to distinguish these areas in Google Earth, as the color contrasts between the lush, irrigated lands and their desert environs stand out, as do the rectilinear patterns of the cultivated fields. …

Earlier in the week, Professor Lewis left us with a dazzling posting on the Death and Partial Rebirth of the Aral Sea. To see the decline of the Aral and the Ogalala at its most dramatic, download this week’s Google Earth File, as the companion and informational heart of this post. For those of you whom

This week was rife with tragic news: the Polish Presidential plane crash in Russia, revolutions and upheaval in Kyrgyzstan, and refugee crises emerging from Tamil emigrees from Sri Lankan, I thought it would be best to leave the gravity to the newspapers for the time being, and insert a bit of humor into this week’s

Yesterday, protestors stormed the offices of the iron-fisted Kurmanbek Bakiyev regime across all of Kyrgyzstan.Ministers were taken hostage, government buildings- torched, police cars- turned over, and the Kyrgyz flag- replaced with the blue flag of the opposition.The opposition has claimed that a provisional government, under the rule of former minister Rosa Otunbayeva, with a constitution