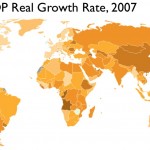 In the 1960s, ‘70s, and ‘80s, scholars divided the earth into three parts: the First World, the Second World, and the Third World. The reigning “three worlds theory,” however, was conceptually incoherent, combining incommensurate geopolitical and socio-economic features. The “First World” encompassed all industrialized, democratic countries, which were assumed to be allied with