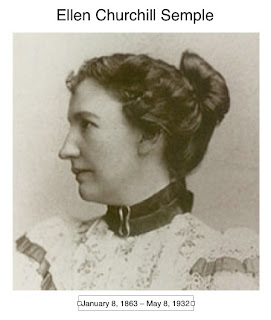 When I was studying geography as a graduate student in the 1980s, little attention was paid to the history of geographic thought. When the works of early 20th century geographers did come up in seminar, they typically served as sign-posts for discredited approaches. Ellen Churchill Semple was a favorite target; passages like this one, from her Influences of Geographic Environment, suggest why.

The dry, pure air stimulates the faculties of the desert-dweller, but the featureless, monotonous surroundings furnish them with little to work with. The mind, finding scant material for sustained logical deduction, falls back upon contemplation. … First and last, these shepherd folk receive from the immense monotony of their environment the impression of unity. Therefore all of them, upon outgrowing their primitive fetish and nature worship, gravitate inevitably toward monotheism (The Influences of Geographic Environment, 1911, p. 512).

Histories of geographic thought tend to pass lightly over “Miss Semple,” as she was once called. In the standard narrative, she performed a valuable service by introducing the “anthropogeography” of Friedrich Ratzel to an English-speaking audience, but she over-emphasized her mentor’s geographical determinism. Progress in human geography required that her approach be superseded, as it was in due time. End of story. 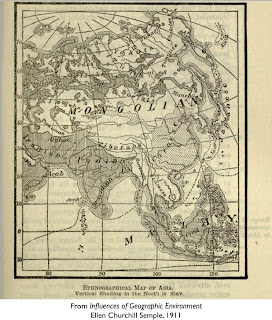 The 100th anniversary of Ellen Churchill Semple’s Influences of Geographic Environment makes this year an appropriate moment to revisit her scholarship. Yes, many passages are overblown and some are galling. But Semple, like the rest of us, was a creature of her time. Despite its flaws, Influences of Geographic Environment is a treasure trove of geohistorical information, reflecting the remarkable erudition of its author. While it is probably fitting that most geographers of her period are read mainly to grasp their manner of thinking, we can still read Semple to learn about the world. Her knowledge of places and times was nothing less than awe-inspiring.

Semple’s take on the world was more nuanced than excerpts like the one above would suggest; in fact, a number of her ideas were ahead of their time. For instance, over the past several decades, scholars have “discovered” ocean basins as coherent frames for historical investigation. Such fields as Atlantic studies, Mediterranean studies, and Indian Ocean studies are all relatively new, and thriving. All this was anticipated by Semple:

[The Indian Ocean] has linked together the history of Asia and Africa: and by the Red Sea and Persian Gulf, it has drawn Europe and the Mediterranean into its sphere of influence. At the western corner of the Indian Ocean, a Semitic people, the Arabs of Oman and Yemen, here first developed brilliant maritime activity, like their Phoenician kinsmen of the Lebanon seaboard. …

From the dawn of history the northern Indian Ocean was a thoroughfare. Alexander the Great’s rediscovery of the old sea route to the Orient sounds like a modern event in relation to the gray ages behind it. Along this thoroughfare Indian colonists, traders, and priests carried the elements of Indian civilization to the easternmost Sunda Isles; and oriental wares, science and religion moved westward to the margin of Europe and Africa. The Indian Ocean produced a civilization of its own, with which it colored a vast semi-circle of land reaching from Java to Abyssinia… (Influences of Geographic Environment, 1911, p. 309)

Like other scholars of her day, Semple had to consider race. That she used racial categories uncritically strikes a discordant tone with modern readers, but she never really bought into racial ideology. Her maps were “ethnographic,” not “racial” (and were far more accurate than those of Fleure in 1962, as can be seen above). More important, she decided to confront the idea of racial superiority directly through research. Her question was simple: if public opinion proclaimed the progressive virtues of the Anglo-Saxon race, how then to explain the lack of progress in the backwoods of eastern Kentucky? Little information on the region was available, so Semple set out to obtain it.

Field research was new to human geography in the late 1800s, and Semple was one of its pioneers.* She undertook a 350-mile horseback trek through the most remote districts of the eastern United States. During her entire trip she reported seeing only a few wheeled vehicles. Blood-feuds still characterized the area, which remained largely beyond the reach of modern economy as well as that of state authority. She conducted interviews over a wide area, collecting information on the economy, crafts, agriculture, music, language, folklore, and so on. Semple was impressed by the resourcefulness of the inhabitants and by their cultural practices, reporting that the “accuracy of their memories for … long poems was suggestive of Homeric days” (p. 34). If the region was nonetheless beset by persistent stagnation, that could be attributed squarely to the topography. “The whole civilization of the Kentucky mountains,” she concluded, “is eloquent to the anthropogeographer of the influence of physical environment.” Race, in short, was not the key to human progress.

Deterministic and judgmental though they may have been, Semple’s conclusions about the mountaineers were not without merit. As she showed, the Kentucky hill-folk in the 1890s could barely participate in wider economic and social circles due to transportation constraints. The mountains here are not particularly high, but the land is steep almost everywhere, and the reach of the state did not extend to road-building in such inhospitable terrain. Given the primitive infrastructure, the only salable products that that would bear the costs of porting to market were ginseng and moonshine; even hogs, which could walk themselves to distant markets, would lose too much weight en route to make the trip worthwhile. Social travel was also highly constrained, enforcing isolation. The geographic environment, in other words, was a major influence. Rugged and remote mountains are indeed difficult for states to control and markets to penetrate. Harlan County Kentucky today has plenty of paved roads, of course, but Semple could hardly have been expected to have foreseen that. And even to this day, rugged lands often remain distinctive. Cultural diversity is typically concentrated in such regions, and insurgencies tend to be more numerous and successful in rough uplands than in adjacent lowlands.

Semple’s achievements are all the more impressive when one takes into account the obstacles that she faced as a woman. Having traveled to Leipzig Germany to study with Ratzel, she was not allowed to enroll in the university or even to sit in the lecture hall. To learn from the famous professor, she was forced instead to listen from the hallway. Yet student and scholar did work together, and Ratzel was sufficiently impressed with her that he picked Semple to translate his major work into English. This she refused to do, preferring instead to write a book of her own—albeit one dedicated to his memory.

By all rights, Semple should have been a star professor at a top university, building her own school of anthropogeography and training a cohort of strong graduate students. But while she lectured at a number of universities, Semple did not gain a regular faculty position until hired by Clark University at the age of 57 (at a significantly lower salary than that of her male peers). Her classroom prowess was legendary; while illustrating her lectures with glass-slide projections, she allegedly never turned to look back at the images, as she always knew exactly what was being shown on the screen behind her. She held seminars with graduate students while visiting other schools, and is said to have been inspiring. In 1921, Semple’s contributions to the profession were recognized when she was elected president of the Association of American Geographers. Needless to say, she was the first woman to hold that position. Until 1985, she was also the last.

* See “The Anglo-Saxons of the Kentucky Mountains: A Study in Anthropogeography.” Journal of Geography, June, 1901.