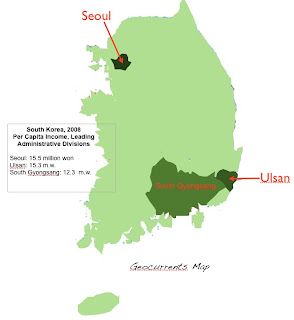 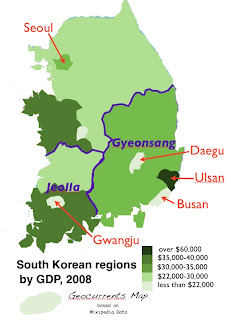 In terms of per capita income, the old patterns are still evident; Seoul is the wealthiest region of South Korea, with Ulsan and South Gyongsang (Gyeongsangnam-do or Gyeongnam) in the southeast coming in second and third. But when it comes to economic production as measured by per capita GDP,* a different map appears. Here South Korean economic development seems relatively evenly balanced; the southwest (Jeolla/Honam) does not appear underdeveloped, while the supposedly privileged Southeast (Gyeonsang) has the lowest as well as the highest levels of output. Seoul is demoted from first place, outclassed not only by Ulsan in the southeast but also by Jeollanam-do (South Jeolla, Jeonnam) in the allegedly marginalized southwest. More astounding is the last-place showing of Daegu, the seat of the old-guard political establishment. Southeastern Busan (Pusan), South Korea’s second largest metro area and the site of the world’s fifth largest port, also ranks surprisingly low.

Overall, South Korea exhibits pronounced variation in regional economic output. On a per capita basis, Ulsan produces 3.6 times more goods and services than does its near-neighbor Daegu, both of which are located in the Gyeonsang region. Regional economic disparities in other technologically advanced countries tend to be less pronounced. In the United States, for example, Connecticut produces not quite twice the economic output per person of Mississippi ($56,000 vs. $29,600). Developing countries, in contrast, often show extreme variation. In Brazil, São Paulo out-produces Piauí by a factor of five; in India, Goa’s per capita GDP outranks that of Bihar by almost an order of magnitude.

The huge gap between Ulsan and Daegu is rooted in the changing fortunes of their main industries. Nicknamed “the textile city,” Daegu thrived when low-wage South Korea profited from massive exports of inexpensive clothing and fabric. But as South Korea climbed the value ladder, it ceased to be internationally competitive in mass-market textiles. As the industry declined, so did Daegu, both economically and demographically. Since the late 1990s, city leaders have pushed high fashion, hoping to emulate Milan, but evidently with little success. Ulsan, in contrast, has prospered from South Korea’s export boom in transportation equipment. Headquarters of Hyundai, and site of the world’s largest shipyard, oil refinery, and automobile factory, Ulsan produces more goods and services on a per capita basis than all but about three or four countries, outpacing the United States by a comfortable margin ($63,800 vs. $46,000).

Although it is relatively easy to explain the discrepancy between Ulsan and Daegu, other patterns on the South Korean regional GDP map seem more perplexing. Why does South Jeolla exhibit such high levels of economic productivity yet maintain a reputation for marginalization? If any Geocurrents readers can help explicate the South Korean GDP map, I invite them to do so!

Although per capita GDP is the most commonly employed metric for economic standing, it is a flawed indicator, especially at the sub-national level. An area can generate high levels of value, yet lose much of the resulting income stream to other places. By the same token, places of concentrated political power can maintain higher levels of per capita income than their GDP figures would indicate.

GDP is coming under increased criticism, but largely because it ignores environmental degradation and non-financial aspects of social development and human satisfaction. Last fall, French President Nicolas Sarkozy “called for a ‘great revolution’ in the way national wealth is measured today, throwing his weight behind a report which criticises ‘GDP fetishism’ and prioritises quality of life over financial growth.” But even if one focuses exclusively on economic issues, GDP figures often paint a misleading picture. Among other things, they can vary tremendously depending on whether they are measured in nominal or purchasing power parity (PPP) terms; thus China has the world’s third largest economy by one measure (nominal GDP), and the second largest by another (PPP GDP). In the end, GDP does not measure “wealth” any more than it does happiness. All that one can conclusively say, as the Wikipedia puts it, is that Gross Domestic Product “is often positively correlated with the standard of living.”