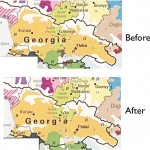 Readers who have carefully examined the maps of the Caucasus posted recently in GeoCurrents may have noted an area marked “Greek” in south-central Georgia. This Greek zone appears on most but not all ethno-linguistic maps of the region, sometimes as a single area, and sometimes as two. Depicting Greek communities here is historically accurate but increasingly anachronistic. Since 1991, the Greek …

In the last weekend of January, 2010, massive protests erupted in the Russian city of Kaliningrad, unnerving the country’s political establishment. Despite bitter weather, an estimated 10,000 people took to the streets to denounce both the local governor and Prime Minister Vladimir Putin, ostensibly for raising utility prices and transport taxes during a time of

Yesterday’s post referred to the Ossetians as a people of “profound world-historical significance,” a phrase that fits their neighbors, the Circassians, even better. That members of the so-called White race are called “Caucasians” stems largely from the widespread nineteenth-century European notion that the Circassians, natives of the northwestern Caucasus, somehow represented the ideal human form