Geographic Environment, Cultural Diversity, and Liberalism in the Eastern Mediterranean 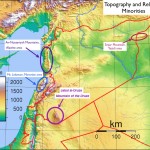 In examining the spatial patterns of the eastern Mediterranean, many observers have been struck by the close correlation between mountainous areas and religious diversity. The heartland of the Druze sect is the aptly named Jabal al-Druze, a volcanic cluster of peaks

When I was studying geography as a graduate student in the 1980s, little attention was paid to the history of geographic thought. When the works of early 20th century geographers did come up in seminar, they typically served as sign-posts for discredited approaches. Ellen Churchill Semple was a favorite target; passages like this one