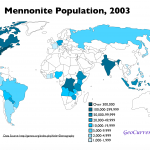 The Moravian Church has a good claim to being the oldest Protestant denomination, tracing its origin back to the Bohemian Reformation of the early 15th century, closely associated with Jan Huss. “Hussites” were persecuted at the time and eventually defeated in battle, and during the Counter-Reformation, Bohemia and Moravia were brought back into the Roman Catholic fold. In the Czech …

The Extreme Disparities of State Revenue

Everyone knows that vast disparities of wealth and productive capacity separate the world’s richest countries from its poorest ones. It is thus no surprise to learn that the per capita GDP of France ($34,092) is 100 times greater than that of the Democratic Republic of Congo ($340). Less widely appreciated is

GeoCurrents is proud to present our eighth installment in the Geocurrentcasts series, an in depth illustrated lecture profiling the history and geography of current global events.This week’s episode takes us to Central Africa, providing a comprehensive look at the history, linguistic diversity, and geography of the region, using the Democratic Republic of the Congo as