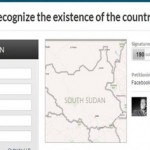 Future Atlas has an interesting new post on a campaign for the recognition of South Sudan—one that petitions not a government but rather Facebook to acknowledge the new country. The same post also discusses the problematic nature of the U.S. Postal Service’s “drop down” geographical menu, which includes such obscure places as the tiny Spanish exclave of Peñón de Vélez …