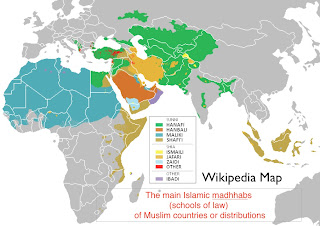 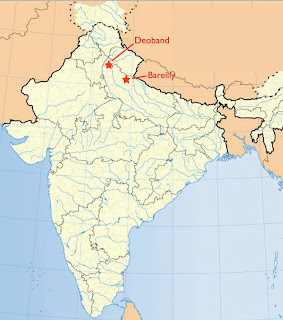 Radical Islamist groups in South Asia such as the Taliban are often classified as Wahhabis, belonging to the austere, puritanical form of Islam institutionalized in Saudi Arabia. But while the ties between the Wahhabis and the Taliban are tight, the latter actually belong to a different branch of the faith. The clearest differences are found in the realm of religious law. Sunni Islam is divided into four orthodox schools of law (Madhhabs), each of which is followed in distinct parts of the Muslim world. A number of rites and prayer forms also vary among the schools. As the map above indicates, Wahhabism, based in Saudi Arabia, is associated with Hanbali law, the strictest form of Islamic jurisprudence. The Taliban, on the other hand, follow Hanafi law, in general the most liberal variant – albeit not as they interpret it. Early attempts by Wahabbi preachers to spread their doctrine in South Asia often stumbled on the differences of Madhhab. As Husain Haqqani explains, “Their adoption of Hanbali religious rites and their strict condemnation of many rituals widely practiced by South Asian Muslims did not sit well with the vast Hanafi Sunni population.”

But as Haqqani goes on to explain, the differences between Wahhabis and the more fundamentalist Hanafis in South Asia have recently diminished almost to the vanishing point. The two groups may differ on a number of minor practices, but they concur on the larger issues. “Sunni Muslims,” Haqqani writes, have cast aside their aversion to Wahhabi groups, creating a large number of traditional Sunnis who embrace Wahhabi political and jihadi ideas without necessarily giving up their rites and rituals.” As is often noted, Saudi Arabian religious financing has helped break down the barriers between the two sects. According to Haqqani, a few of the most radical South Asian Islamist groups, including Lashkar-e-Taiba (discussed last Tuesday), have fully embraced the Wahhabi creed.

Mapping the four standard schools of Sunni Islamic law is relatively easy, although the authors of the Wikipdia map posted above deserve commendation for doing a particularly good job. But the differences that really matter are not those of Madhhab, but rather are found among less formal and much more recent “movements” within Islamic thought and practice. Among South Asian Sunni Muslims, the crucial distinction is that separating Deobandis from Barelvis, both following Hafani law. The Deobandi movement is aligned with Wahhabism and advances an equally harsh, puritanical interpretation of Islam. The Barelvi movement, in contrast, defends a more traditional South Asian version of the faith centered on the practices of Sufi mysticism. In India and especially Pakistan, tensions between the two groups can be intense, sometimes verging on open warfare. Extremist Deobandi groups, such as the Taliban, specifically target the shrines of Sufi mystics, venerated by Barelvis as places of sanctity and worship. As recently reported in the Express Tribune, “When the Taliban took over Buner in April 2009, they first besieged Pir Baba’s shrine. Taliban leader Fateh Khan said it was because the place was a hub of ‘adultery and idolatry.’” As a result, many Sufi shrines are now heavily guarded by Pakistani security forces.

Mapping the distribution of Deobandi and Barelvi adherents is all but impossible, as the two movements are spatially intertwined. One can, however, easily depict their place of origin, as both movements are named for towns in northern India: Deoband and Bareilli. Although radical Deobandi groups are most closely associated with Pakistan and Afghanistan, the movement’s intellectual and spiritual heart is still the Indian city of Deoband. Its Darul Uloom Deoband is reputed to be the second largest madrasah (religious school) in the Sunni Muslim world, following only Al-Ahzar in Cairo. Barelvi Islam is more diffuse, without a clear center of gravity. Although firm numbers are impossible to find, most experts maintain that Barelvis significantly out-number Deobandis not just among Indian Muslims but in Pakistan as well. In Pakistan, however, Deobandis have been advancing of late, and Barelvis retreating. According to one estimate, “some 15 per cent of Pakistan’s Sunni Muslims would consider themselves Deobandi, and some 60 per cent are in the Barelvi tradition…. But some 64 per cent of the total seminaries are run by Deobandis, 25 per cent by the Barelvis …”

The Deobandi movement began with the founding of the Darul Uloom Deoband in 1866. Early Deobandi leaders were distressed by the triumph of British colonialism and English-language education, which they sought to combat by purifying their religion, stripping away mystical practices and other innovations that they viewed as contrary to the faith. The most hardline Deobandis came to regard Barelvis, as well as Shiites, as non-Muslim opponents deserving of attack.

The relationship between the Deobandi movement and the state of Pakistan is ambiguous. Deobandi thinking is too traditional to be nationalistic, regarding the community of the faithful, not the modern nation-state, as the proper Quranic political vehicle. Most Deobandi scholars rejected the partition of British India in 1947, preferring to seek the spread of Islam in an undivided India. The idea of Pakistan, moreover, was originally embraced by Muslim groups despised by the hardline Deobandis. The father-figure of Pakistan, Mohammad Ali Jinnah, was originally an Ismaili (a follower of the Aga Khan) who later converted to mainstream Shi’ism; the state he founded was at first strongly supported by Barelvis, Shi’ites, Ismailis, and Ahmadis. Over time, however, orthodox Sunni Islam came to dominate Pakistan. President Muhammad Zia-ul-Haq (1978-1988) worked hard to turn Pakistan into a fundamentalist Sunni state, officially declaring the heterodox Ahmadis to be non-Muslims. As a result, the Pakistani government increasingly veered in the direction of the harsh Deobandi movement. The connection, however, is a two-edged sword for modern Pakistan, as the Deobandi faithful ultimately have contempt for national identities and borders.

The Deobandi movement has attracted a good deal of negative attention lately, both locally and on the global stage. Critics link it to terrorist organizations; the Taliban, after all, sprang out of Deobandi madrasahs in northeastern Pakistan, as did several other violence-prone organizations. Outrageous fatwas (religious rulings) do not help its reputation. In May 2010, a decree that women cannot work for wages shocked mainstream Muslim opinion worldwide. (The Times of India referred to it as a “Talibanesque fatwa that reeked of tribal patriarchy.”) Even more embarrassing was the 2006 “fatwas for cash” bribery scandal, which was revealed by an Indian television sting operation.

But despite such issues, the Darul Uloom Deoband remains a highly respected institution in several quarters. Defenders of the movement note that the radical madrasahs that produce the Taliban extremists are only loosely affiliated with the Deobandi movement, and that no graduate of Darul Uloom Deoband itself has ever been associated with a terrorist organization. In a first-hand account of the seminary published this week in Religioscope, Mahan Abedin gives voice to the leaders of the Deobandi school. Of particular interest is the relationship between Deobandi and Wahabbi Islam. As Abedin writes:

On the question of so-called Wahabism I put it to Madrassi that many critics of the Deoband seminary claim that Deobandi beliefs are just a small step away from full-scale Wahabism. In response the deputy Vice Chancellor makes a clear demarcation between the two schools of thought, before adding that if we consider the Wahabis and the Barelvis as two extremes, the Deobandis occupy the centre ground in that continuum.

The Vice Chancellor’s efforts to portray Deobandis as Islamic centrists would strike many as absurd. Consider, for example, his group’s position on the Barelvis, who still constitute the majority of South Asian Muslims. According to Abedin:

The deputy Vice Chancellor and the head of PR go to great lengths to underline the “purist” nature of the Deoband seminary, and it is in this context that they use exclusivist terms to describe other Islamic traditions, such as the Barelvis and Shi’ites, both of which are regarded as non-Muslim by the hardline Deobandis. They are particularly critical of the Barelvis, a traditional quasi-Sufi movement started in 1880 to counter the influence of the Deobandis and other reform movements, directing most of their criticism at the Barelvi practice of visiting the shrines of saints.