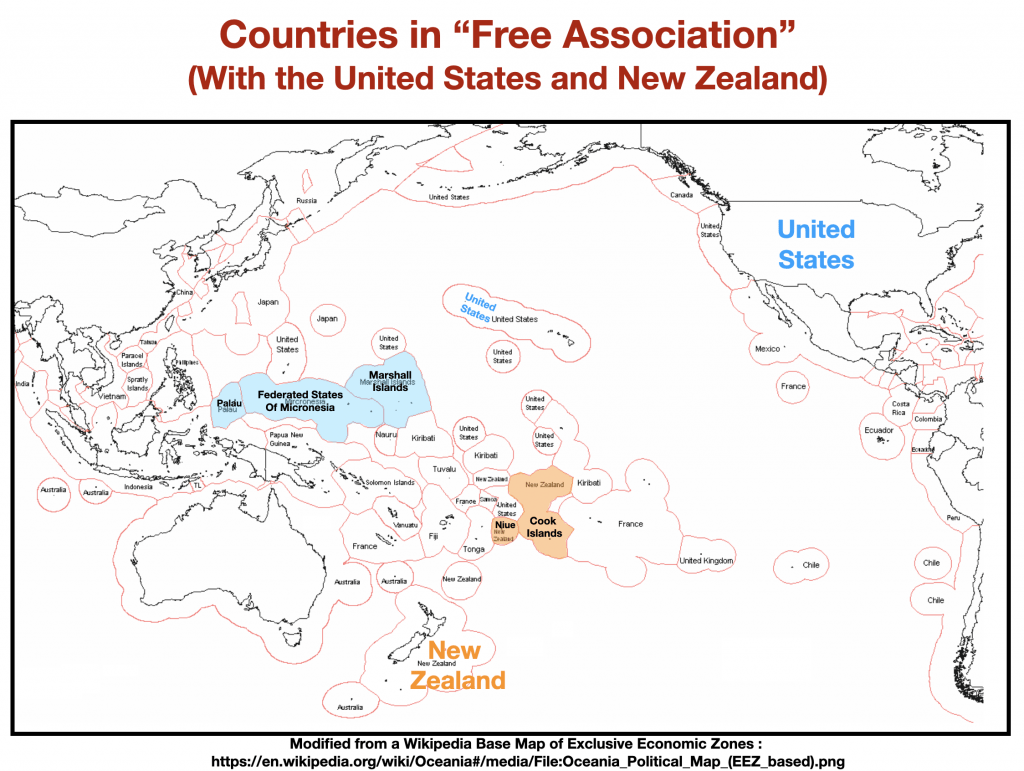 How many independent countries exist in the world? This seemingly simple question has no straight answer. There is neither a global consensus nor a binding institution capable of generating a definitive list of who’s in and who’s out. Instead, each sovereign state exercises the right to declare its own list of real and rogue nations. The CIA map—like the State Department list on which it is based—fudges the issue a bit. The 193 UN member states form its core, but two other polities, Kosovo and the Holy See (Vatican City), are included as well, giving a total of 195 “independent states.”[1] An internet query will typically yield a slightly higher number, usually by adding Taiwan and Palestine.[2] Such polities gain entry on the grounds that they are recognized as sovereign by some United Nations members. (Of course, that could also be said for Abkhazia, South Ossetia, and other places that rarely make the cut.) The most capacious roster that I have seen, published on the World Population Review website, names 206 “sovereign nations” as of 2020.[3]

It is not surprising that Kosovo is included on the CIA map, since it functions as a sovereign country and is recognized as such by the U.S. Department of State. Many other member states of the United Nations also recognize Kosovo. But China and Russia do not, effectively precluding its admission to the organization; as permanent members of the Security Council, both the PRC and the Russian Federation can veto applicant states. Russia rejects Kosovo’s independence, viewing it as a wayward part of Serbia, a state that it has long diplomatically supported.[4] As a result, UN maps to this day depict Kosovo—which has functioned as an independent state since 2008—as if it were still part of Serbia. 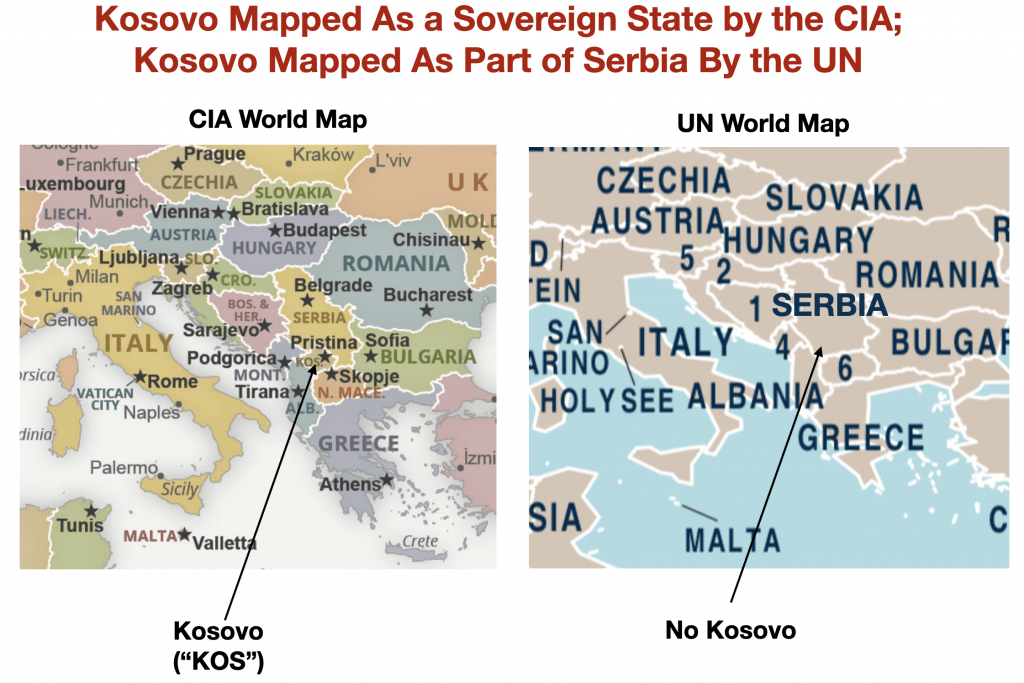 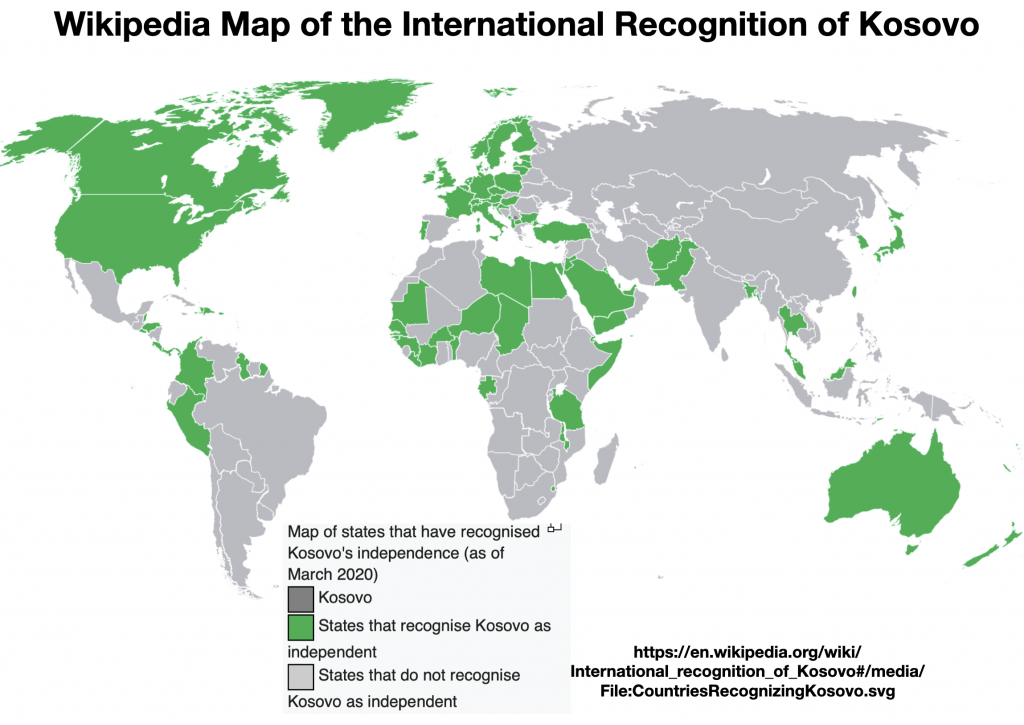 Taiwan is the most vexing case. One might even say that the extraordinary call for “strategic ambiguity”[5] vis-à-vis Taiwan reveals most starkly the limits of standard world maps and models. It is universally understood that the Taipei-based Republic of China (ROC) exercises sovereignty over the island of Taiwan. Yet most governments officially pretend otherwise, in deference to the vastly more powerful People’s Republic of China. Those few that do not bow to the PRC must recognize Taiwan’s own audacious counterclaim to be China’s only legitimate government. The U.S. Department of State makes no bones about its position: “With the establishment of diplomatic relations with China on January 1, 1979, the U.S. Government recognized the People’s Republic of China as the sole legal government of China and acknowledged the Chinese position that there is only one China and that Taiwan is part of China.”[6] The CIA world map falls in line with this declaration, representing Taiwan as though it were part of the PRC. It would be hard to find balder evidence that the map reflects a diplomatic vision of the world. Left unsaid is that Taiwan’s people are embroiled in a long-running, high-stakes controversy over the status and future of their island, with the majority viewpoint swinging away from a Chinese identity toward a specifically Taiwanese one.[7] The growing political consensus in Taiwan seems to be one of embracing the island’s de facto independence, bypassing any incendiary claims for de jure sovereignty. 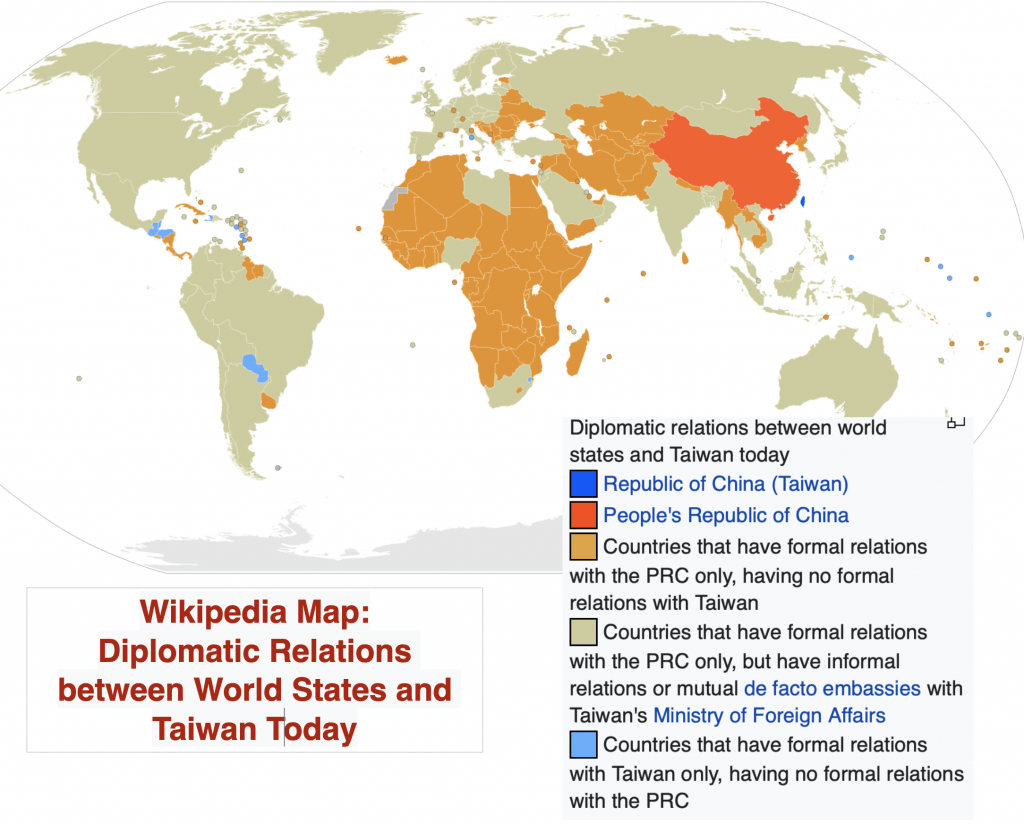 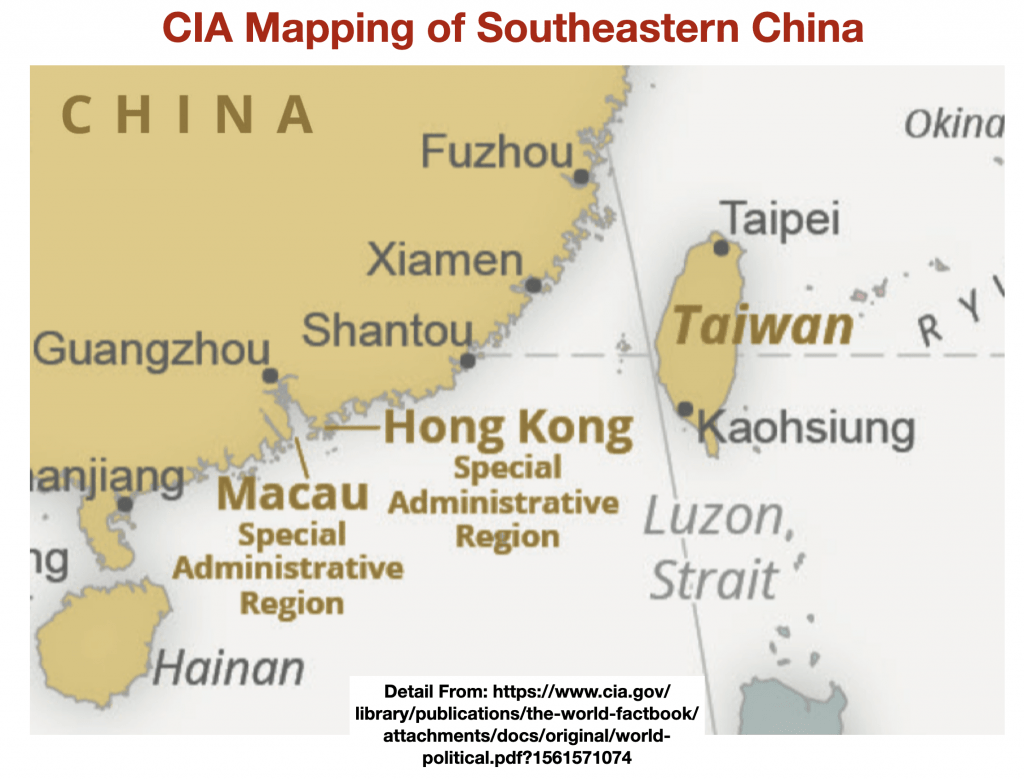 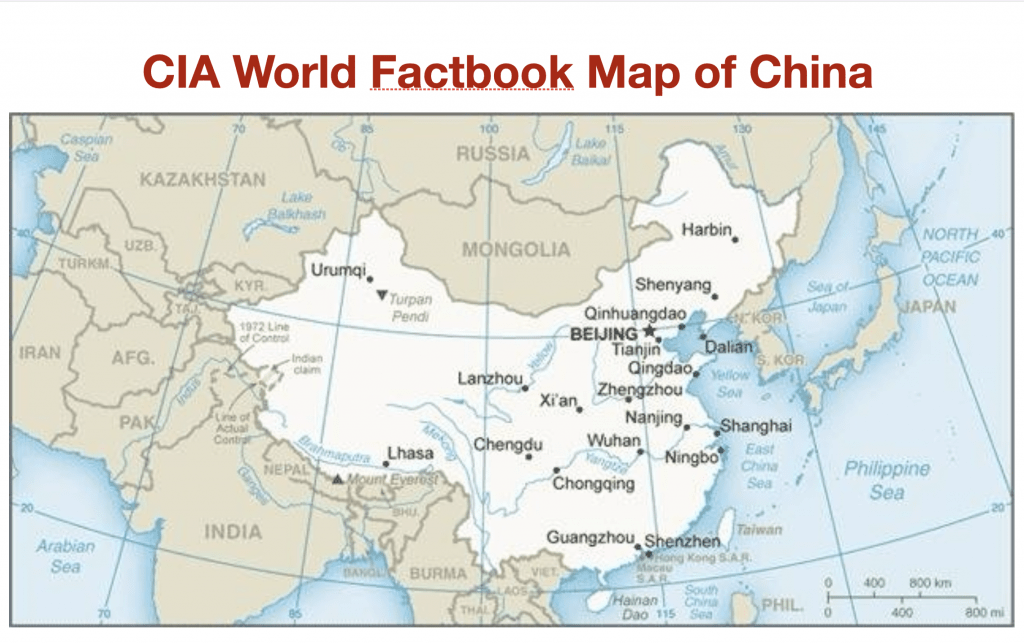 While the Taiwanese controversy is the most dramatic, less familiar conundrums can be found farther down on any expanded country list. If the Holy See is granted sovereign-state status, one might ask, why is the “Sovereign Military Order of Malta” denied the same consideration?[8] The Knights of Malta may not have an actual territorial domain, but the Vatican City is little more than a collection of buildings inhabited by an officially celibate population – hardly a real country either, as the term is conventionally understood. And if mutual recognition is taken to be an important feature of statehood, what then does one make of UN members that are denied such standing by some of their UN fellows? This applies most notably to Israel, but also to Armenia and the Republic of Cyprus.[9] 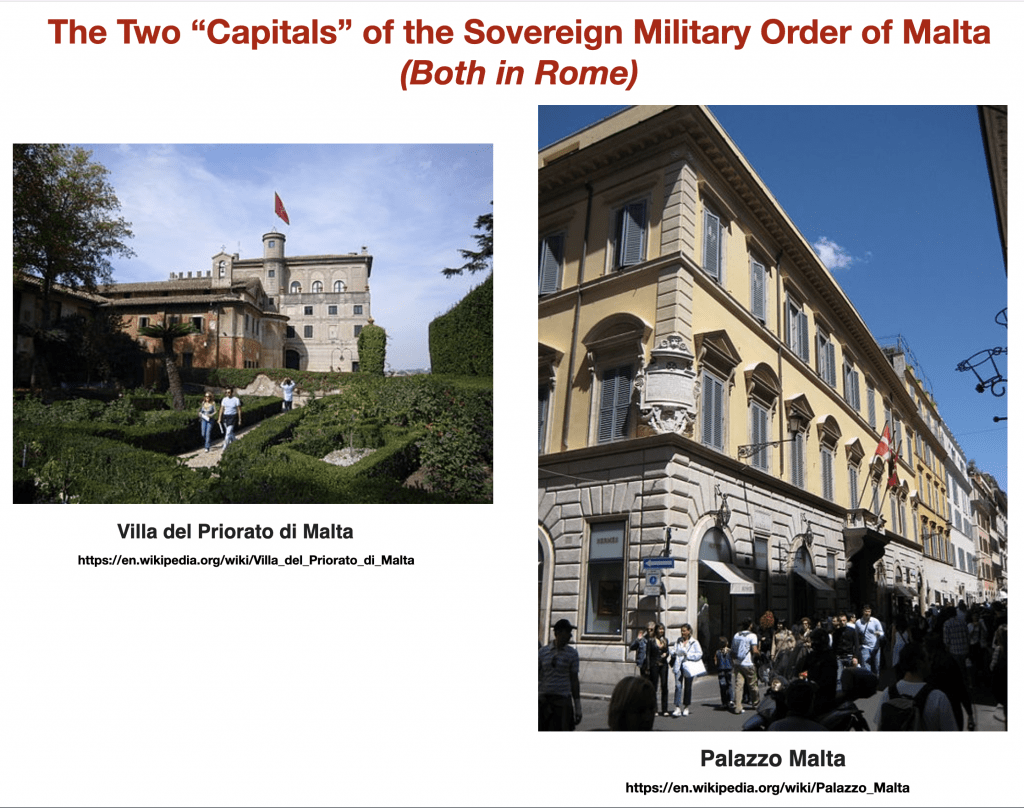 To craft one’s list of countries based on de facto sovereignty rather than de jure recognition would solve some of these problems, but that procedure would generate other headaches. Palestine, for one, would probably be excluded, since its sovereign power is limited; it does not control its airspace, waters, or entry points, and its spatially separated territories are far from united. Likewise, several full-fledged UN member-states could find their country status called into question. Notable here are the Pacific nations that operate under compacts of “free association”[10] with the United States: the Marshall Islands, the Federated States of Micronesia, and Palau. All three are essentially “para-countries” in which the U.S. provides external security, access to several American domestic programs, and automatic U.S. residency rights in exchange for military concessions. In the case of the Marshall Islands—home of the strategically vital Ronald Reagan Ballistic Missile Test Site (the world’s largest target, receiving test missiles fired from Vandenberg Air Force Base in California)—such considerations are significant indeed. New Zealand has similar arrangements with the Cook Islands and Niue. The Joint Centenary Declaration (2001) between New Zealand and the Cook Islands expressly declares the independence of the latter: “In the conduct of its foreign affairs, the Cook Islands interacts with the international community as a sovereign and independent state.“[11] Yet the Cook Islands and Niue are not reckoned as sovereign by the United States, and are marked as dependencies of New Zealand on the CIA’s world political map. Few other lists of “independent countries” or “sovereign states” include them, either. 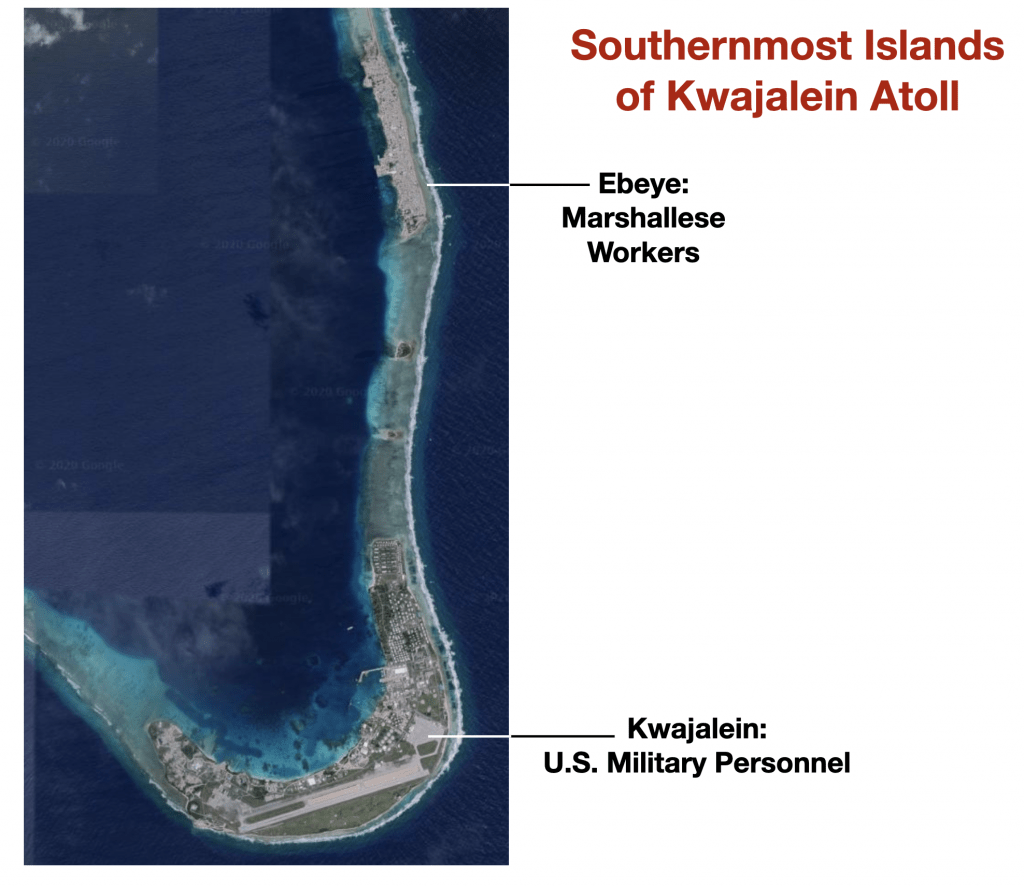 Interestingly, the United Nations does regard Cook Islands and Niue as sovereign states, officially designating them (on the UN map of “The World Today”) as the world’s only “Non-Member States of the United Nations.”[12]Crucial to this designation is treaty-making power. As noted on the United Nations website, “the Secretary-General, as depositary of multilateral treaties, recognized the full treaty-making capacity of the Cook Islands in 1992 and of Niue in 1994.”[13] But not all official UN maps grant them the same status. On the UN map of “The World,” found in the same cartographic repository as “The World Today,”[14] the Cook Islands and Niue are unambiguously marked as falling under the control of New Zealand.[15] Evidently, confusion over the status of these islands is widespread. 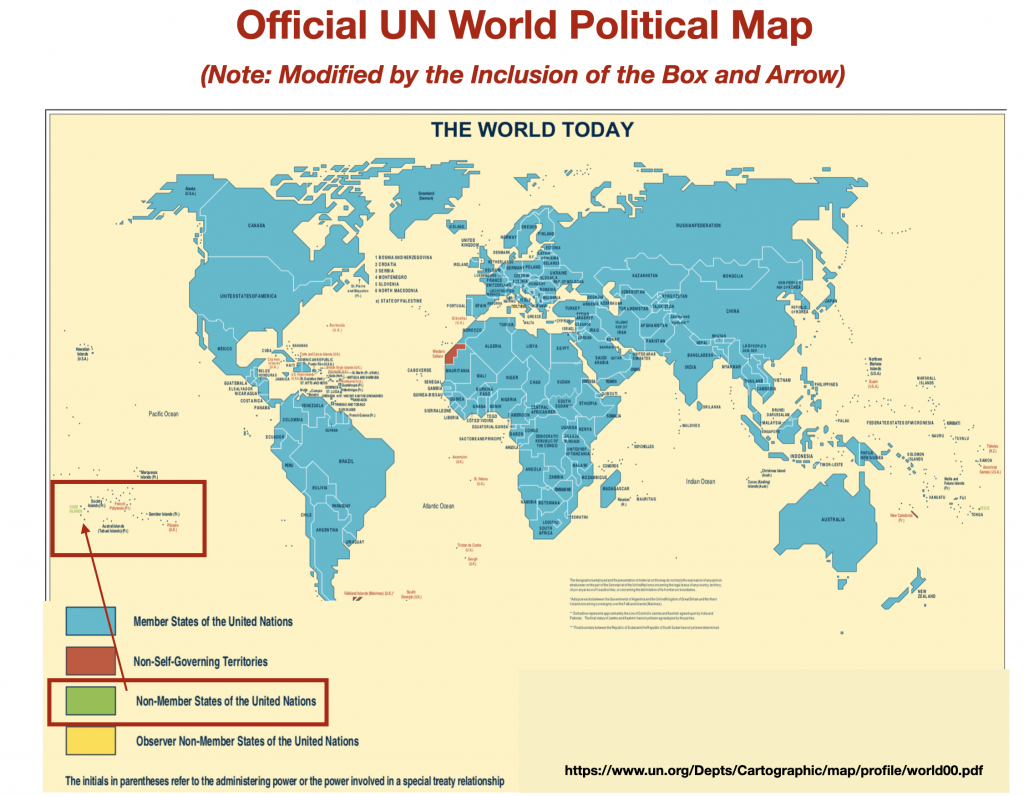 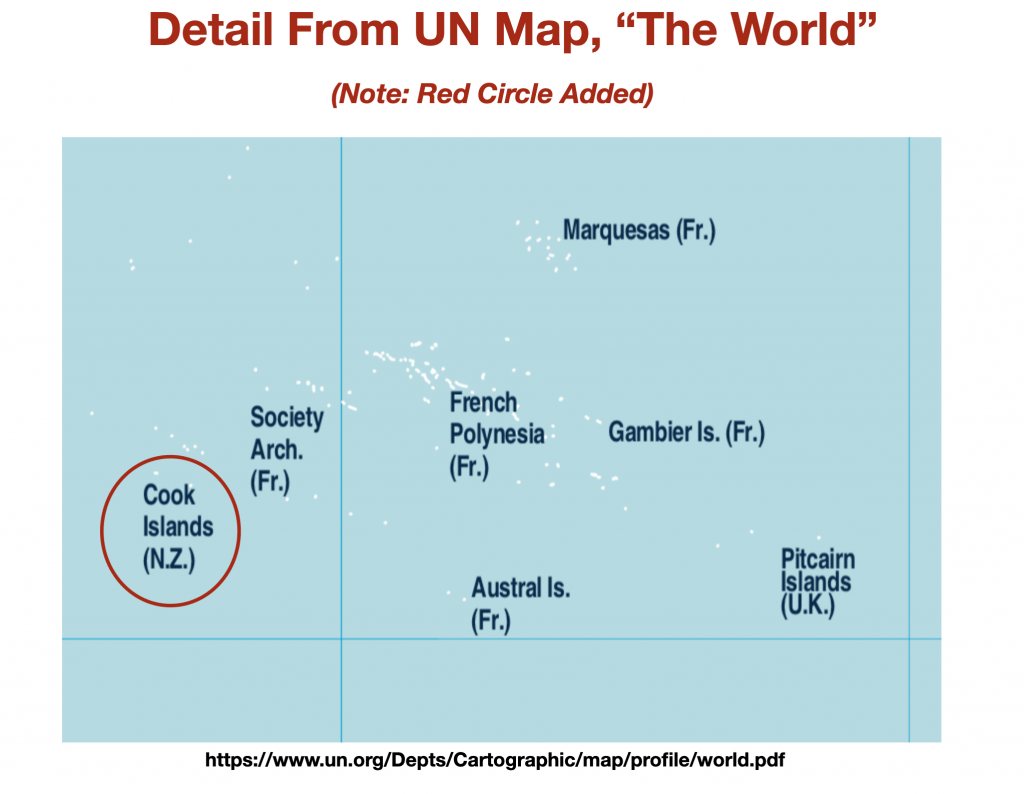 As this inventory reveals, getting a handle on all the subtleties of the international system is a maddening pursuit. The closer we look, the more irregularities we find. Riddled with contested boundaries and competing claims—and alive with moving borders, shared sovereignties, exclaves and enclaves, ghost states and para-countries—the political patchwork we actually inhabit is a precarious and jerry-rigged affair. Little wonder that most of these loose ends are routinely kept out of view; the sheer simplicity of the standard model is one of its main attractions. It was a clever move to create a make-believe surface where all countries are sovereign, national, and equal. But what is gained in legibility is lost when it comes to navigating the rough and tumble arena of power politics.

[2] For example, “Countries in the World: 195,” Worldometer: http://www.worldometers.info/geography/how-many-countries-are-there-in-the-world/.

As this article states, “There are 195 countries in the world today. This total comprises 193 countries that are member states of the United Nations and 2 countries that are non-member observer states: the Holy See and the State of Palestine.” For another example, see “How Many Countries,” Infoplease: How Many Countries? According to this article, “There are 196 countries in the world today. Unless you don’t count Taiwan… Taiwan is not considered an official country by many, which would bring the count down to 195 countries.”

[3] The World Population Review’s figure of 206 is based on the 193 UN members, the two UN “observers” (The Vatican City and Palestine), and 11 additional polities classified as “‘other’ states.”  The “other” states are: Abkhazia, Artsakh (Nagorno-Karabakh), Cook Islands, Kosovo, Niue, Northern Cyprus, Western Sahara (SADR), Somaliland, South Ossetia, Taiwan, and Transnistria. The map of “sovereign nations” on the same website, however, does not match the list. See:  http://worldpopulationreview.com/countries/sovereign-nation/.

Similarly, a 2007 “School’s Wikipedia Selection” came up with a list of 202 “sovereign states” by including most of the polities mentioned in the preceding paragraph: see https://www.cs.mcgill.ca/~rwest/wikispeedia/wpcd/wp/l/List_of_countries.htm

[4] It is significant that the United States, which usually follows the standard international practice of refusing to recognize states that unilaterally declare independence, made an exception in the case of Kosovo.

[8] The “sovereignty” of the Knights of Malta is discussed well in the Wikipedia article on the entity: https://en.wikipedia.org/wiki/Sovereign_Military_Order_of_Malta. Note, however, that the measure of sovereignty that it does possess is sometimes challenged by the Vatican; see “Pope Seizes Power from the Knights of Malta, Brutally Ending 900 Years of Their Sovereignty,” by Damian Thompson, The Spectator, January 25, 2017:  https://blogs.spectator.co.uk/2017/01/pope-seizes-power-knights-malta-brutally-ending-900-years-sovereignty/

[10] “Compact of Free Association,” Legal Information System of the Federated States of Micronesia:http://www.fsmlaw.org/compact/

[11] “The Cook Islands and Free Association: Understanding the Nature & Practice of the Special Relationship with New Zealand,” Cook Islands Ministry of Foreign Affairs and Immigration:  http://cookislandslawsociety.com/resources/2015%20Cook%20Islands%20New%20Zealand%20Free%20Association%20(MFAI).pdf.  Emphasis in the original.

The same map places the Holy See and the State of Palestine in slightly different category, that of “Observer Non-Member States of the United Nations.”

[14] Both maps can be found at the UN’s “Geospatial Information Section”: https://www.un.org/Depts/Cartographic/english/htmain.htm