Breakaway countries are by no means the only areas of contested sovereignty in the world today. Boundary disagreements are rife, involving many UN members in slow-burning conflicts. According to Alexander C. Diener and Joshua Hagen, of the roughly 300 contiguous international land borders, fully one-third are contested.[1] Island disputes can be especially complicated, involving multiple states that are not necessarily adjacent to the contested sites. Most notorious is the Spratly archipelago in the South China Sea, parts of which are claimed by no fewer than six countries: China, Taiwan, Vietnam, Malaysia, Brunei, and the Philippines.[2]  Labeling all of these overlapping claims on a world map would certainly be challenging. The CIA’s approach is to leave the archipelago geopolitically unmarked, even though some of these islands now bristle with armaments. While one can be sympathetic with the difficulty of marking specks in the sea, ignoring land-border disputes is harder to justify. Particularly where one or another disputant insists that all third-party maps must reflect its own version of the truth, persistent boundary disputes between UN members would seem to deserve more acknowledgement than they receive. 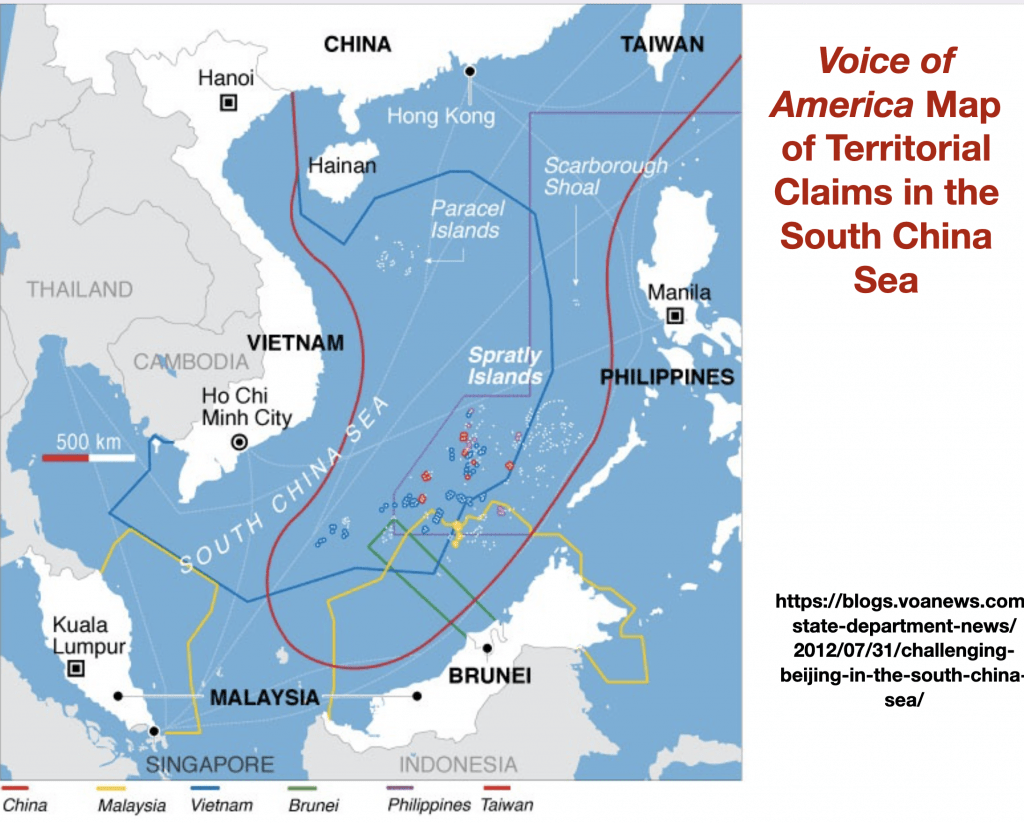 Kashmir is an instructive case. All or parts of the Kashmir region have been contested for decades by three nuclear powers: India, Pakistan, and China. India is so insistent on controlling the narrative that it has outlawed maps that depict the actual situation on the ground, requiring cartographers to portray Pakistani- and Chinese-controlled areas as if they were part of India.[3] CIA mappers finesse this by distinguishing Indian claims from the “line of control” (with Pakistan) and the “line of actual control” (with China). The result is a rare case where contested sovereignty is rendered visible on a document that studiously ignores such conflicts wherever possible.  India’s eastern border conflicts with China, by contrast, are disregarded by the CIA (and indeed by most other world political maps), even though one of these disputes emerged in 2017 as a military flash-point.[4] 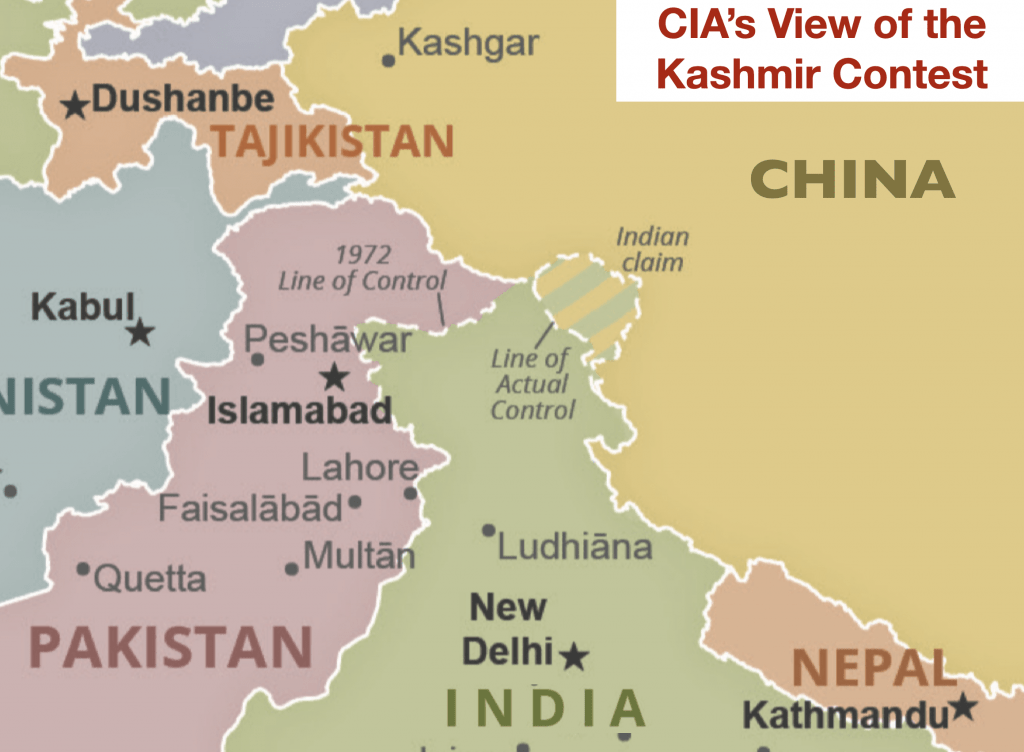 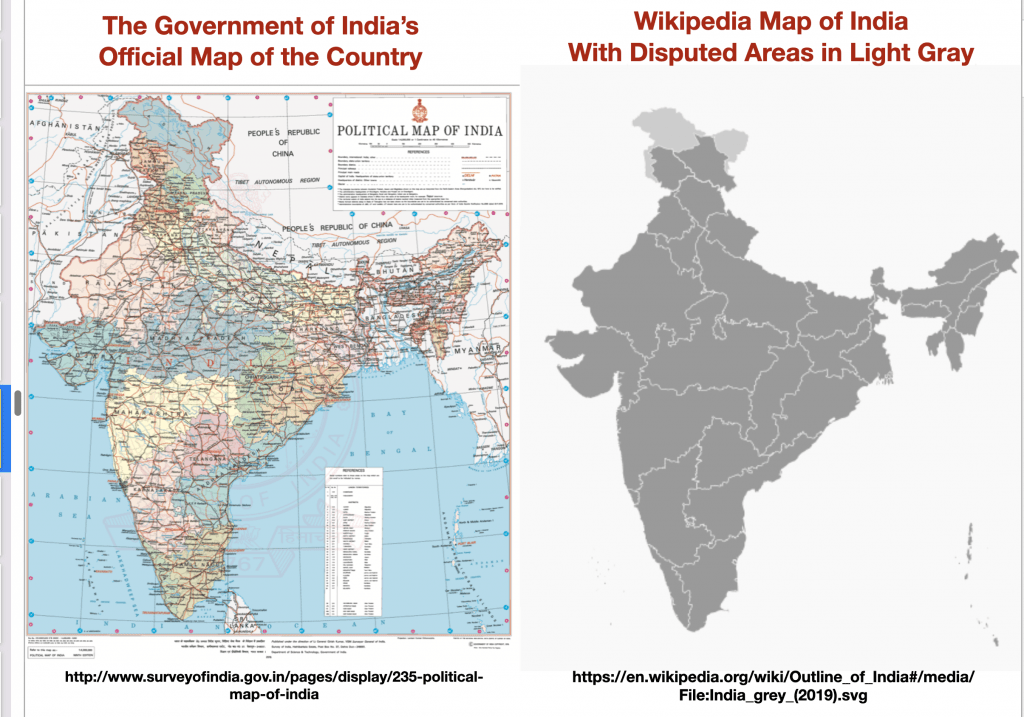 Pakistan is not as demanding as India about how other countries map its spatial extent. But the official Atlas of Islamic Republic of Pakistan (2012) reveals some telling departures from the international community’s boundaries in the region.[5] Predictably, this atlas portrays Pakistan as rightfully including all of greater Kashmir, albeit labeling the region “Disputed Territory.” (The border with China in this region is likewise labeled “undefined.”) More surprising is its portrayal of a sizable portion of neighboring Gujarat, a Hindu-majority Indian state. After the violent partition of 1947, this area—formerly ruled by the princely state of Junagadh and Manavadar—became part of the Republic of India. The Pakistani atlas suggests that its incorporation is seen as illegitimate in Islamabad by showing much of western Gujarat as a (non-disputed!) part of Pakistan. The global political overview in the same volume portrays the same region as if it were an independent country. In the imagination of the Pakistani cartographer, it also retains its former intricate geography, pocked with numerous exclaves and enclaves. Although these features vanished with the end of British rule, their afterlife in the Atlas recalls Junagadh’s unusual shape and status as a self-governing state under the Raj. 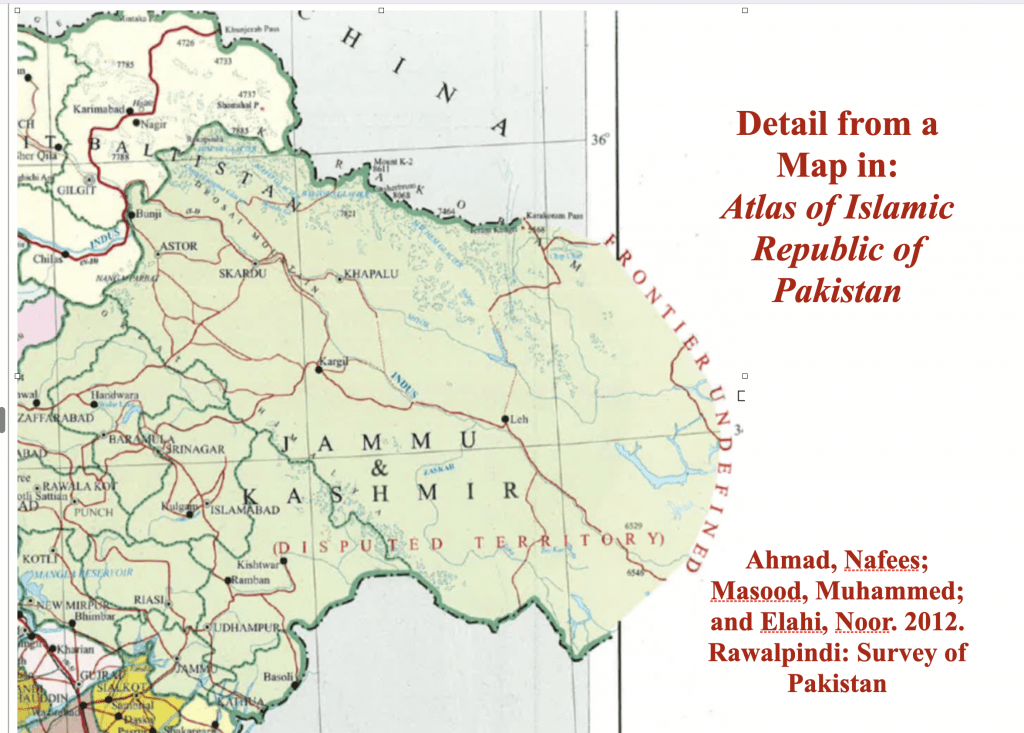 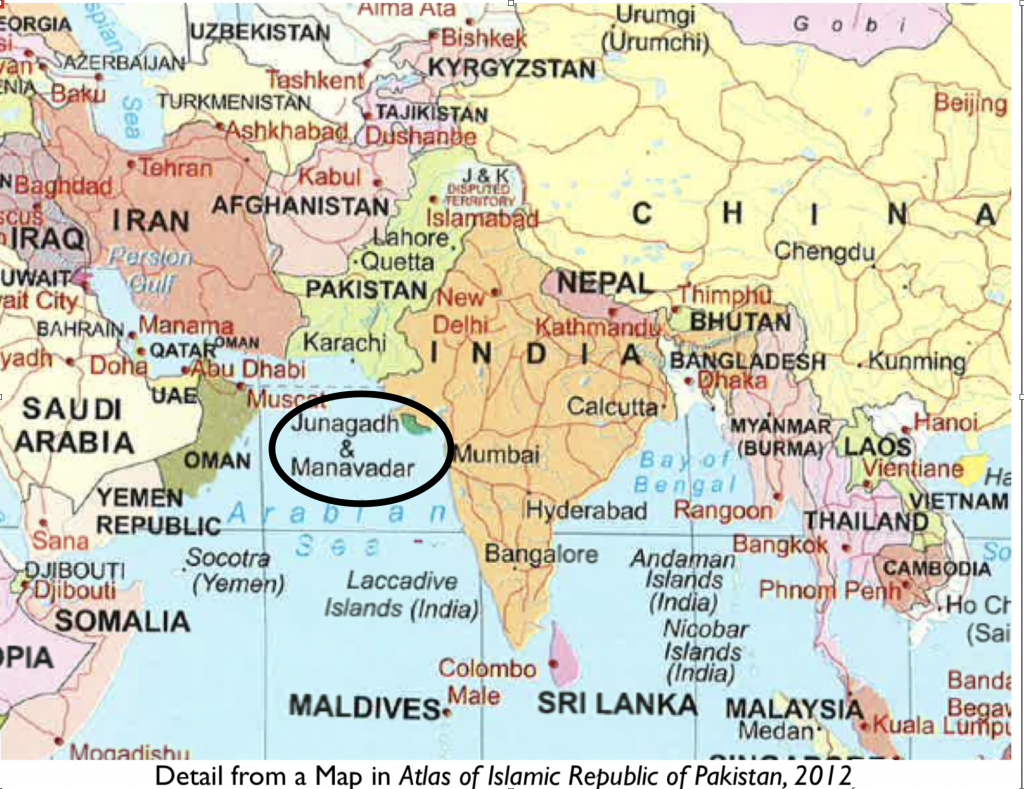 Whether or not they are disputed, international borders also vary tremendously in their intrusiveness on the ground. The heavily armed border zone between North and South Korea, at one end of the spectrum, is of an entirely different order from the ethereal abstraction separating Belgium from the Netherlands in the town of Baarle-Nassau. Where the Korean Peninsula is cleft by a militarized four-kilometer-wide no-man’s land, a traveler in Europe’s Low Countries might cross unknowingly from one state to another simply by wandering through a doorway. A naïve reader of the CIA map might imagine the Korean border as the less formidable of the two, given that it is denoted by a porous-looking dashed line (a sign meant to indicate that it remains unresolved in international law.) Or consider the Canadian and Mexican borders of the United States, which appear identical on the map despite massive differences in how rigorously they are fortified and defended. The fact that virtually every international border can be depicted just like any other is among the clearest indications that the CIA’s cartographic project is a normative one. A descriptive approach would call for a different set of discriminations. 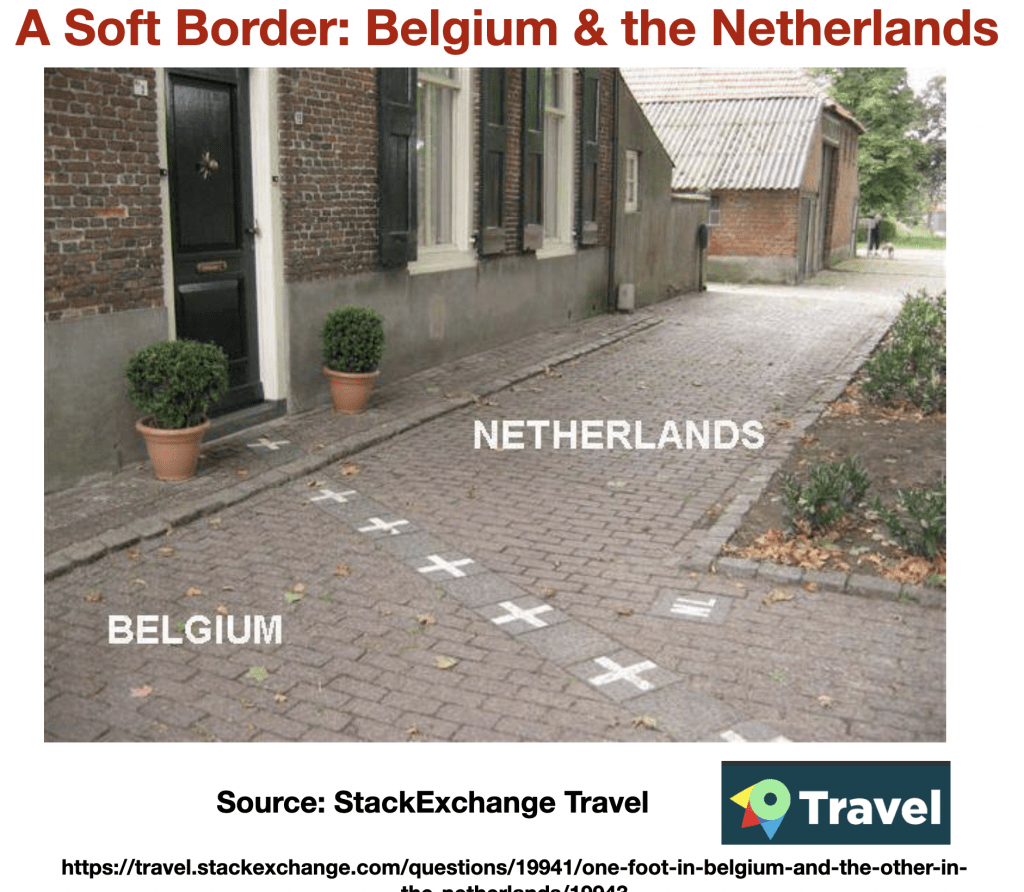 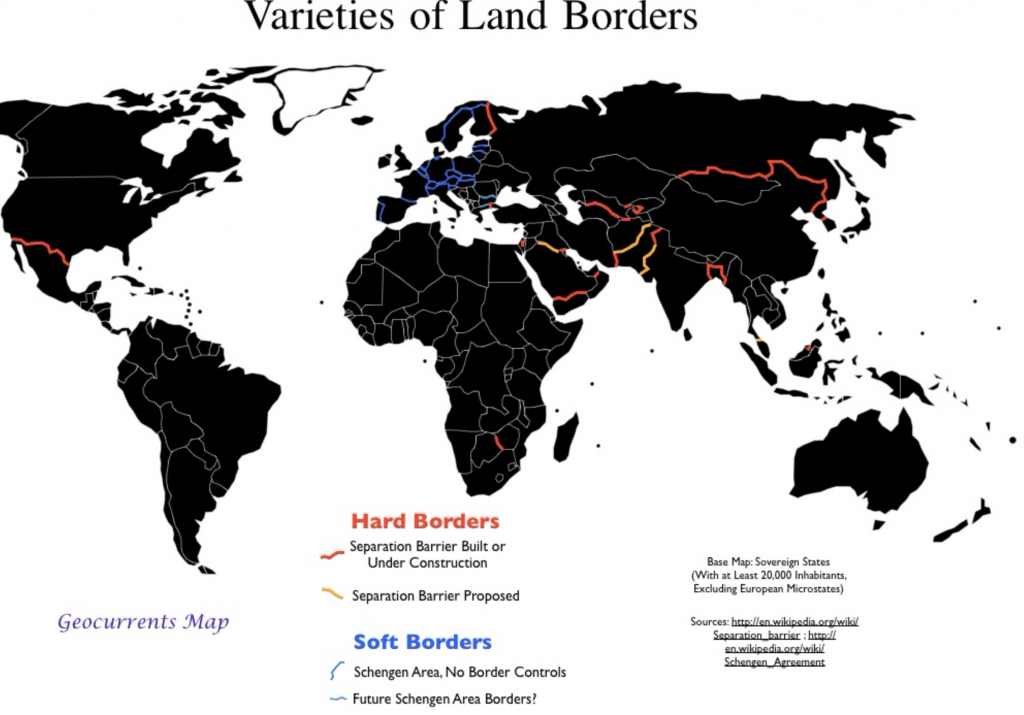 Countries are generally thought of as covering contiguous territories. Yet quite a few have detached bits, or exclaves.[6] Americans are familiar with their own disconnected state of Alaska, but most seem unaware of other examples, including some of immense geopolitical import. Few U.S. college students know that a small piece of Russia, the oblast called Kaliningrad, is almost entirely surrounded by NATO and EU member countries. (The CIA map does label Kaliningrad as Russian, but it is easy to miss.) France has more numerous detached provinces, and in more distant areas. Guiana, Martinique, Guadeloupe, Reunion, and Mayotte are integral departments of France, in exactly the same way that Alaska and Hawai’i are part of the United States. While its logo-map in our minds may be the classical European hexagon, France today is also a South American country, a Caribbean country, an Indian Ocean country, and an African[7] country. 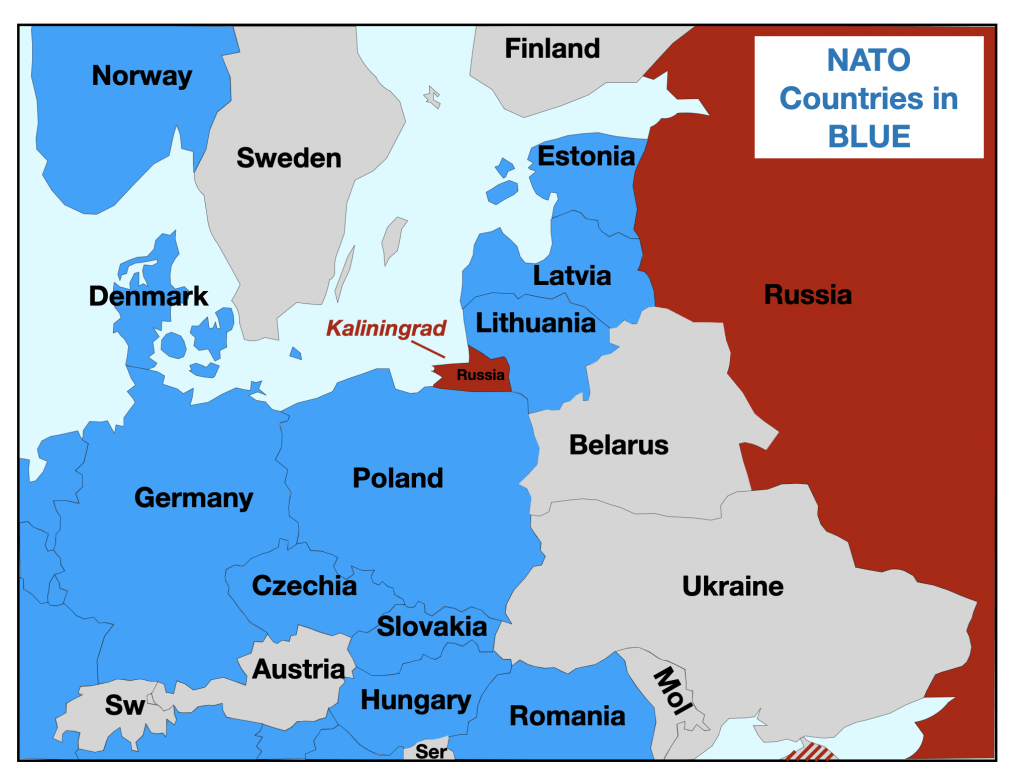 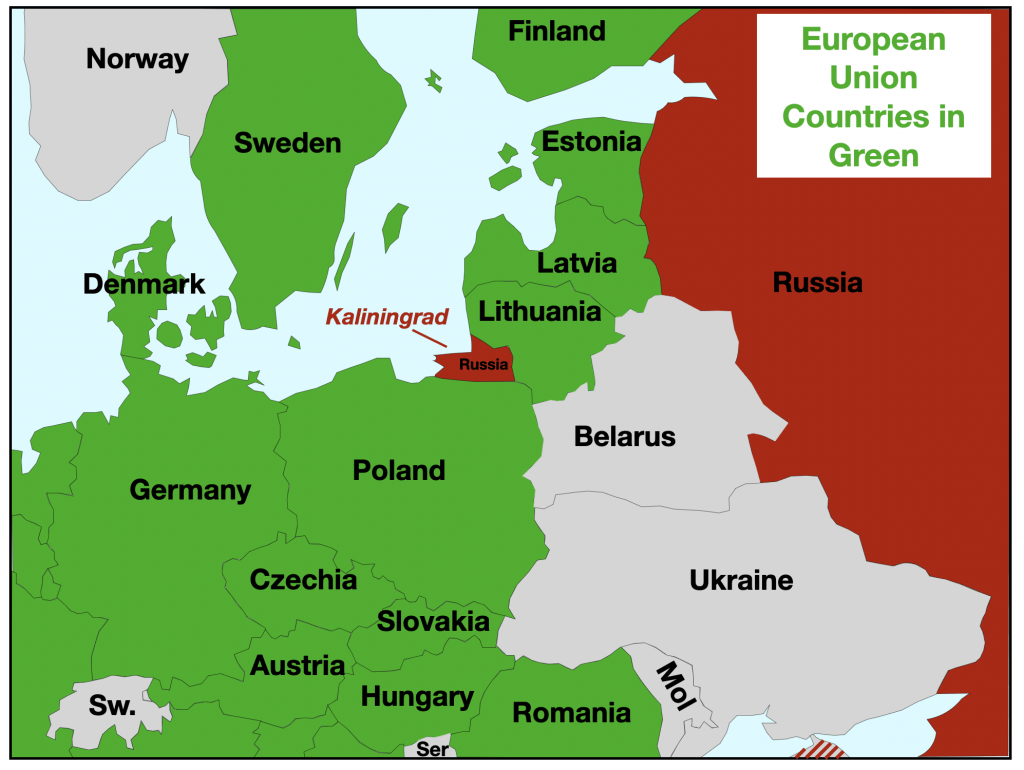 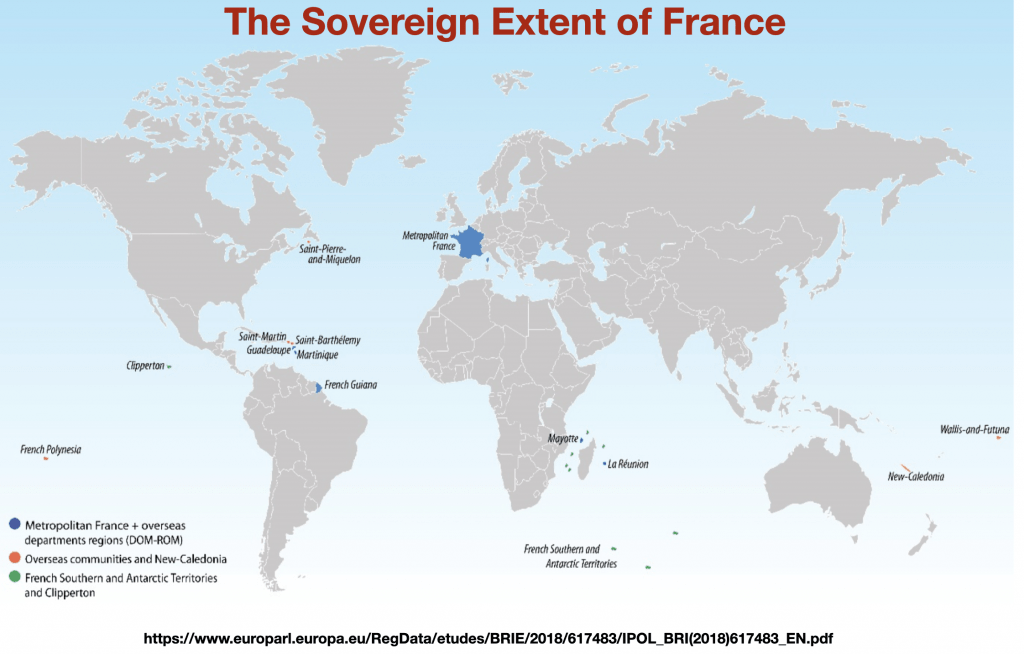 Other border incongruities are strewn about the world as well. Nesting territories and seasonally fluctuating borders may have no great geopolitical import, but they challenge our models nonetheless. What should we make, for example, of Nahwa village: an exclave of the United Arab Emirates that is located in a larger exclave of Oman (Madha) that is in turn wholly surrounded by the United Arab Emirates?[8] Or what of Belgium’s 22 territories encircled by the Netherlands—the largest of which includes six Dutch enclaves within it?[9]  (The border between India and Bangladesh in the Cooch Behar area was even more involuted until it was simplified in 2015, counting one third-order enclave: a bit of India within Bangladesh within India within Bangladesh.)[10] In another European case, involving Slovenia and Croatia, border complexities have generated a situation in which state authorities “are not entirely sure exactly where the border line is.”[11] Another form of anomaly arises where an international dividing line does not stay fixed in time. Such “moving borders” range from an ice-defined alpine boundary separating Italy from Austria—where an array of glacier-tracking devices are now needed to update international maps in real time[12]—to Pheasant Island in the Bidasoa River, an islet that passes from Spain to France and back again every six months.[13] The latter island has historically found a role as a neutral zone for treaty signing (the Peace of the Pyrenees in 1659) and as a venue for royal marriages. 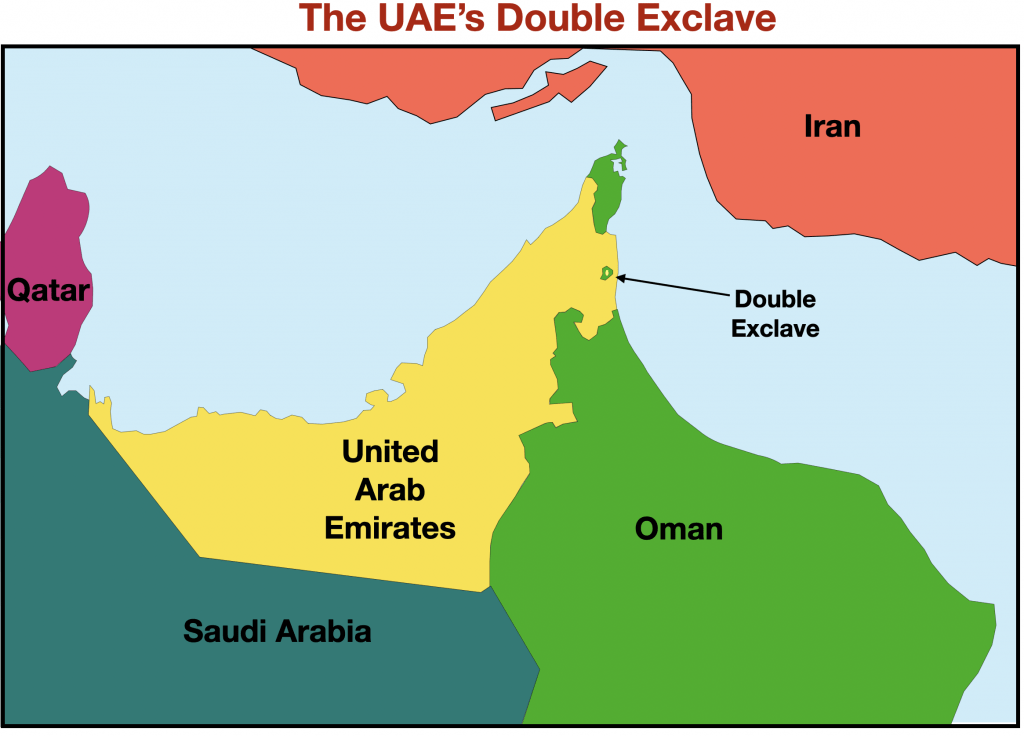 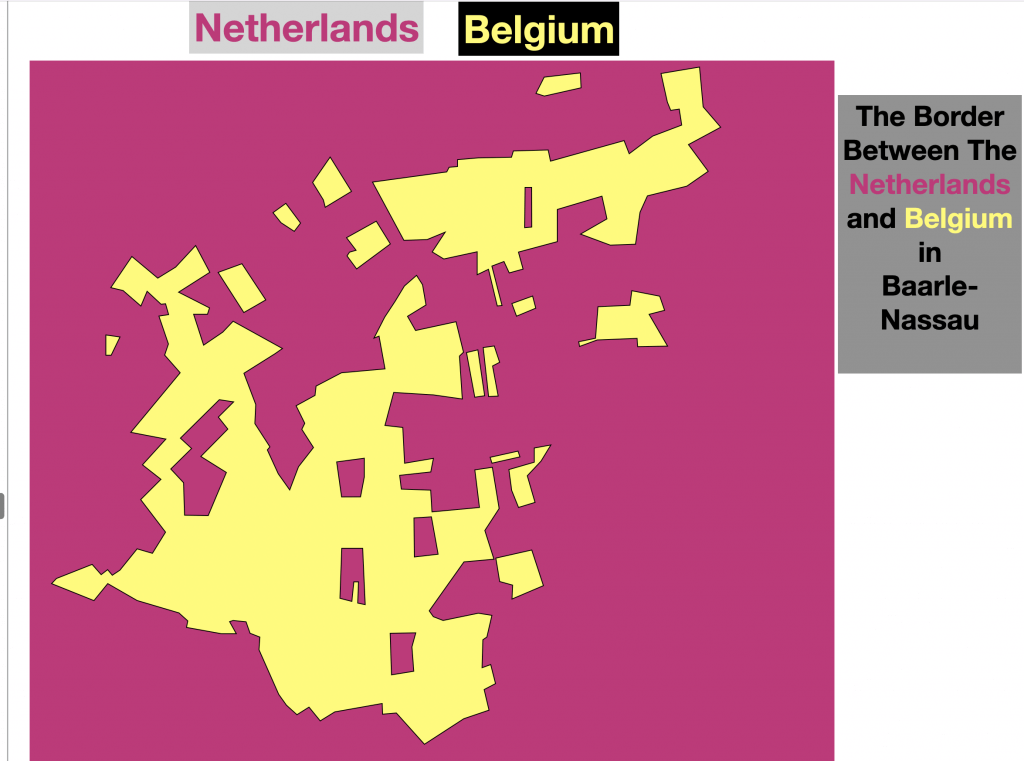 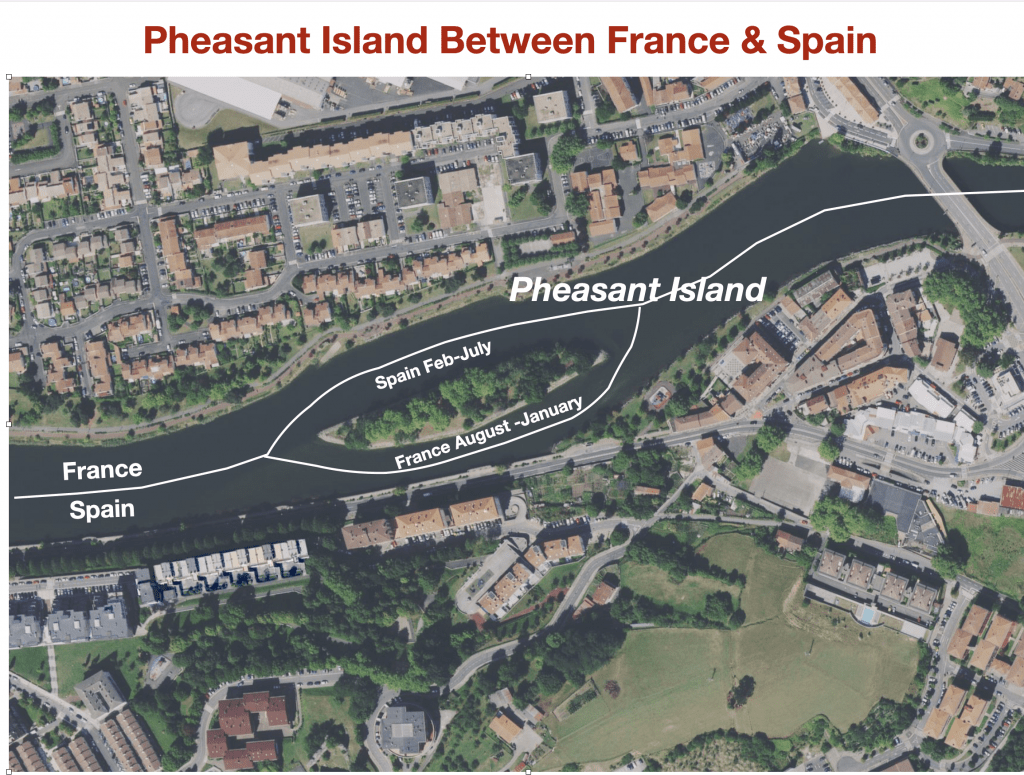 Nesting territories, like temporally fluctuating Pheasant Island, are a good example of geo-anachronisms: survivals of a pre-modern order that was built on radically different premises from the modern norm of clean-cut, stable borders. Geo-anachronism has other telltale expressions as well, especially in Europe. Small size is one. Luxemburg, at 2,586 square kilometers (999 square miles), is a speck on the world map, but it dwarfs Monaco, a nano-state of just two square kilometers.[14] Andorra, San Marino, Lichtenstein, and the Vatican City all fall on the micro-state spectrum as well. A clue to the premodern origins of some of these polities is their limited sovereignty.[15] The Principality of Andorra today counts two heads of state, both of whom reside elsewhere: the Spanish/Catalan bishop of Urgell, and the president of France. Much as it runs against the grain of French republicanism, Emmanuel Macron is simultaneously an elected premiere and a feudal prince,[16] whether he wants the honor or not. Benign anomalies like this attract little media attention and may well be dismissed as geo-curiosities. But considered alongside the quasi-states, de facto states, border disputes, fluctuations, and other incongruities discussed above, they further underscore the slippage between the map and the world. 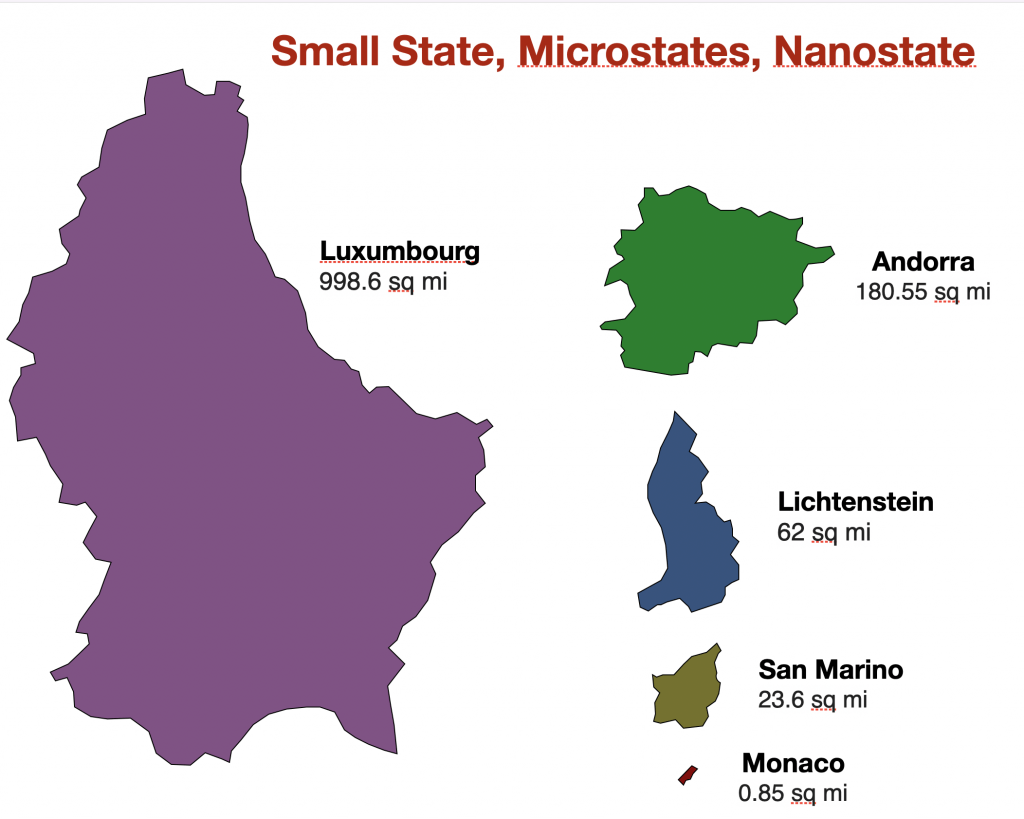 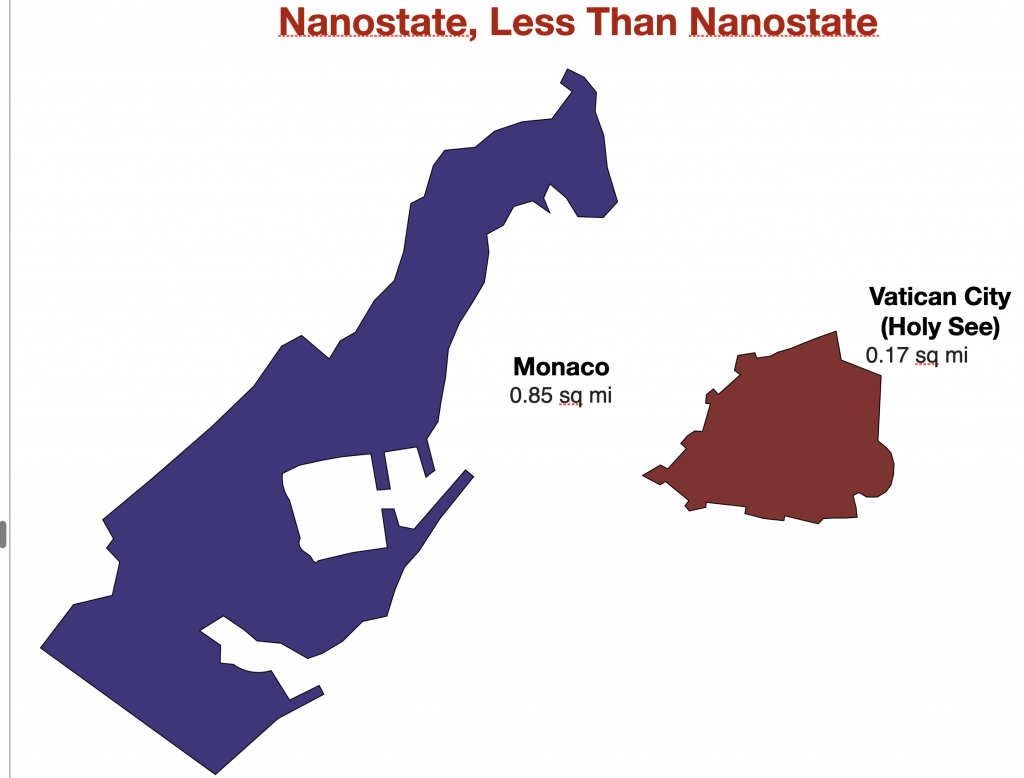 And that’s not all.

[2] “Territorial claims in the Spratly and Paracel Islands,” Global Security.Org:http://www.globalsecurity.org/military/world/war/spratly-claims.htm

[4] In August 2017, India and China were rattling their sabers in this area intensively enough to prompt warnings of war. This generally overlooked conflict is also intricate, involving little Bhutan as well as the world’s two demographic giants. (See “Chinese and Indian Troops Face Off in Bhutan Border Dispute,” by Michael Safi, The Guardian, July 5, 2017: https://www.theguardian.com/world/2017/jul/06/china-india-bhutan-standoff-disputed-territory

[6] Strictly speaking, an exclave must be entirely surrounded by the territory of another country. If it can be reached from the main body of the state by water, it is instead defined as either a “semi-exclave” or a “pene-exclave.” The terminology is complex; see the explanatory diagram of territorial discontinuities found in the Wikipedia article “Enclave and Exclave” https://en.wikipedia.org/wiki/Enclave_and_exclave. For a classic work on this phenomenon, see Robinson 1939. For a more detailed and recent study, see Vinokurov 2007.

[7] This assertion is true to the extent that the island of Mayotte is part of Africa whereas Reunion belongs with anIndian Ocean region.

[11] Nikolić 2019, p. 18. Zoran Nikolić’s The Atlas of Unusual Borders is a visual treasure-trove of such border irregularities. For a somewhat similar and equally delightful work, see Nick Middleton’s (2017) An Atlas of Countries That Don’t Exist.

[14] The full international recognition of such microstates, Deon Geldenhuys (2009, p. 10) argues, indicates a “devaluation of the importance of territory in the 20th century,” and consequently a diminution of the territorial principle that ostensibly lies at the core of the standard model of world politics.

[15] As Caspersen notes, “entities such as Monaco and Andorra … have pragmatically accepted less than full sovereignty” (2012, p. 103).  Lichtenstein and San Marino have also ceded some power to their much larger neighbors (Switzerland and Italy, respectively), as is explained in the Wikipedia article on Associated Statehttps://en.wikipedia.org/wiki/Associated_state

[16] “Why Emmanuel Macron Is Technically Now a Prince,” by Madeleine Luckel. Vogue, May 15, 2017:  http://www.vogue.com/article/emmanuel-macron-co-prince-of-andorra