Articles tagged with: Collapse of China 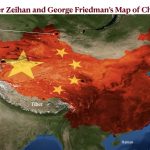