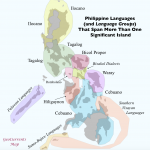 The best example of seas connecting opposing shores is probably the Philippines, a quintessentially archipelagic country composed of more than 7,000 islands.

Last Friday’s post on the Maguindanao Massacre in the southern Philippines linked the event to a combination of Philippine electoral politics and privatized military forces. Deeper roots are found in centuries-old imperial conflicts and religious rivalries. Islam was spreading northward through the Philippines when the Spaniards arrived in the late 1500s. Although the Spanish colonial