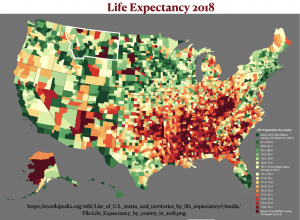 Maps of health and longevity show many of the same patterns seen on earlier maps posted in this GeoCurrents sequence. In the United States as a whole, several county-clusters of relatively low life expectancy stand out. The most prominent is in eastern Kentucky, southern West Virginia, and southern Ohio, an area mostly inhabited by Euro-Americans. Several areas demographically dominated by African Americans also post low longevity figures, including the southern Mississippi Valley and a few of the large cities that are visible on this county-level map, such as Baltimore and Saint Louis. Almost all counties with large Native American populations also have relatively low figures. Counties with Hispanic majorities, in contrast, generally have average or high levels of 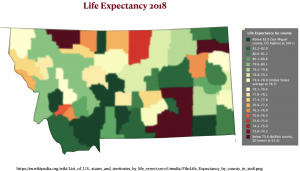 longevity, as is clearly visible in southern Texas. Although life expectancy tends to correlate with income, the correlation collapses in many of these areas. Hidalgo County, Texas is over 91 percent Hispanic and has a per capita income of only $12,130, making it “one of the poorest counties in the United States,” but it ranks in the highest longevity category on this map. In Camp County, in northeast Texas, the average life expectancy of white residents is only 74 years, whereas that of Hispanics is 92 years. In most Texas countries, Hispanics outlive whites. Presumably, diet and activity levels are major factors.

Life expectancy varies significantly across Montana, with some counties falling in the highest category and others in the lowest. In Montana, low figures are found in counties with large Native American populations and in the former mining and smelting counties of Silver Bow and Deer Lodge. The relatively wealthier counties of south-central Montana post high longevity figures. 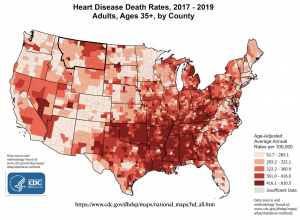 The map of heart-disease deaths in the United States shows some stark geographically patterns. Rates are highest in the south-central part of the country but are also elevated across most of the eastern Midwest. Heart disease death rates tend to be lower in major metropolitan counties as well as in rural countries across much of the West and western Midwest. Many of the patterns seen on this map are difficult to interpret. Why, for example, would heart-disease death rates be much lower in western North Carolina than in eastern Tennessee? (Perhaps the obesity map, posted 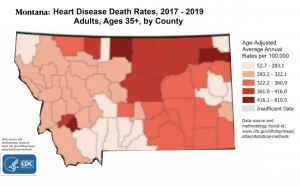 below, offers a partial explanation, although only by begging the question.) And why would some counties that are demographically dominated by Native Americans have very high rates whereas others, especially those in New Mexico and Arizona, have very low rates? In Montana heart disease tends to be elevated in Native American counties – and in Silver Bow (Butte). South-central Montana has low rates. 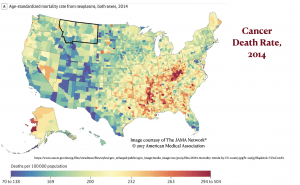 On the U.S. cancer death-rate map of 2014, high rates are clearly evident in areas demographically dominated by poor white people (central Appalachia) and poor Black people (the inland delta of the Mississippi in western Mississippi and eastern Arkansas). Low rates tend to be found in the 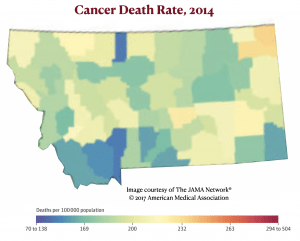 Rocky Mountains, south Florida, and parts of the northern Great Plains. No clear patterns are evident in Montana. Gallatin and Liberty counties fall in the lowest category found in the state, yet have almost nothing in common. The small population of Liberty County, however, makes comparison difficult. 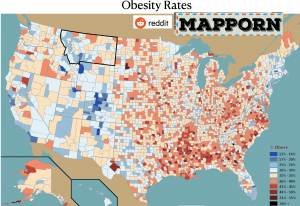 Finally, the patterns seen on the U.S. obesity map are similar to those seen on the preceding maps. The low rates found in the Rocky Mountains, extending from northern New Mexico to northwest Montana, are notable. The northern Great Plains have a higher obesity rate than might be expected based on other health indicators. Some odd juxtapositions are found on this map, with 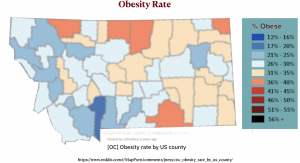 several neighboring counties of similar demographic characteristics posting very different figures. Why, for example, would Pecos County in West Texas have such higher rates than its neighbors? In Montana, it is not surprising that Gallatin County, with its youthful, outdoor focused population, has the lowest obesity rate.