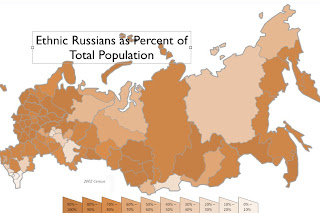 In August 2009, Russia recorded 1,000 more births than deaths, the first month of natural population increase in more than 15 years. Russian officials, worried about their country’s declining population, were pleased that their efforts to encourage childbearing were showing signs of success. Overall, however, demography is still a major concern for Russian nationalists. 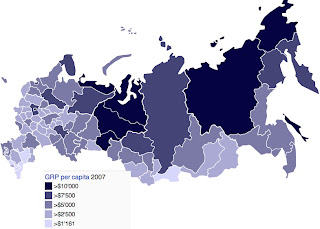 The Wikipedia map of the Russian Federation’s natural population growth (excluding, in other words, immigration and emigration) shows some intriguing patterns. Most striking is the fact that areas of relatively rapid growth (dark green on the map) have large non-Russian populations. Russians constitute roughly 4 percent of Chechnya’s population, 7 percent of Dagestan’s, 20 percent of Tuva’s, and 41 percent of Sakha’s. Russians are more prevalent in the demographically expanding areas of western Siberia (Tyumen, Khantia-Mansia, and Yamalia), but Tyumen is still one of Russia’s most ethnically diverse oblasts, and Khantia-Mansia and Yamalia both have large non-Russian minorities (34 percent and 41 percent respectively). The Russian heartland of western European Russia, on the other hand, shows the largest excess of deaths over births. The proportion of Russians in the federation, currently at 80 percent, is thus declining – much to the consternation of the Russian nationalists. 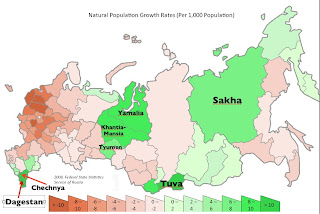 Patterns of natural population growth and decline also correlate with patterns of economic production, but in a more complicated pattern. Higher fertility rates are evident in both the richest and poorest parts of the country. Dagestan, Chechnya, and Tuva, with low levels of per capita gross regional product, show positive population growth rates largely because their fertility levels are high; the average woman in Chechnya, for example, can be expected to give birth to 3.4 children. Russia’s richest areas, such as the oil and natural gas producing Khantia-Mansia and Yamalia, and mineral-rich Sakha, are also demographically expanding. This pattern is most clearly evident in Tyumen Oblast, the richest region of Russia, with a level of per capita economic production seven times the national average. In 2007, Tyumen’s birth rate of 14.2 per 1,000 people comfortably exceeded its death rate of 9 per 1,000. Contributing to its population growth was its relatively low mortality rate; in 2008 in Russia as a whole, the death rate was 14.6 per 1,000 people.