Tatarstan: A “Hostage of Freezing Relations between Russia and Turkey”? 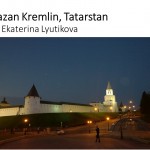 Tatarstan has not been …

Despite the attention that sensational natural disasters receive in the media, their long-term significance sometimes seems questionable. But when nature’s calamities do change societies, the consequences can be profound. The All Soul’s Day Lisbon Earthquake of 1755, for example, purportedly led many European thinkers to question whether natural calamities reflect the will of God, boosting