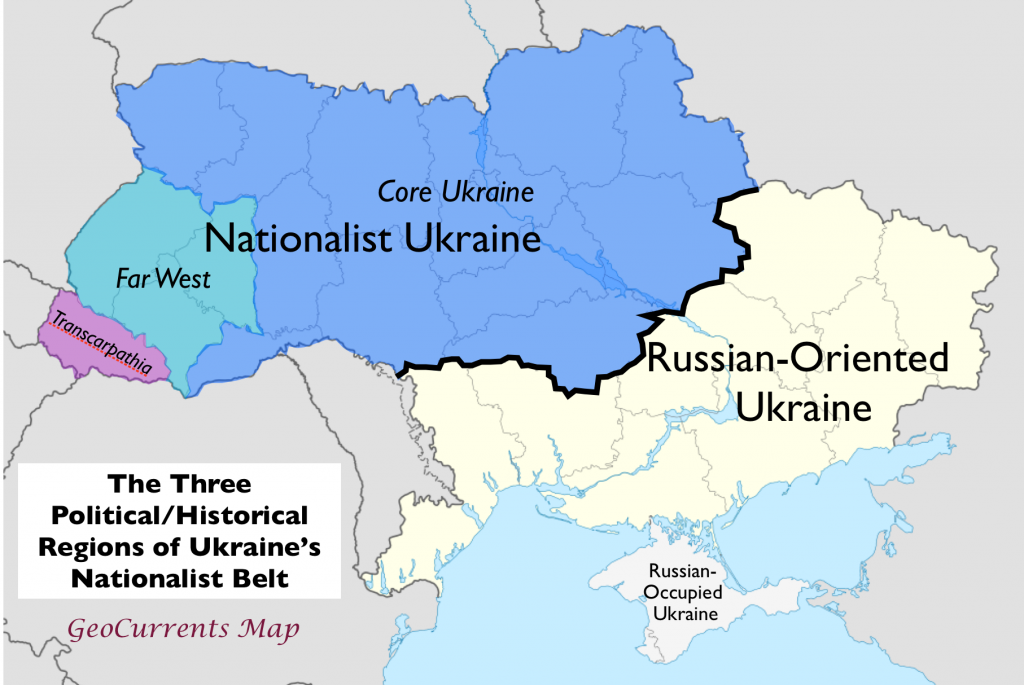 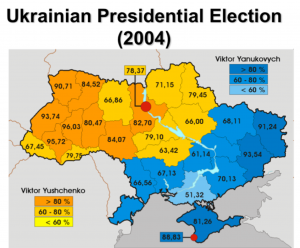 Like many other pundits, David Frum fears that Vladimir Putin is plotting to transform Ukraine into a weak federation and then transform some of its federal units into de facto Russian dependencies. As he argues in a recent Atlantic article:

In the weeks since Russian forces seized Crimea, Vladimir Putin’s plan for mainland Ukraine has become increasingly clear: partition. Putin’s ambassadors and ministers don’t use that word, of course. In talks with their U.S. and NATO counterparts, they prefer the word “federalism.” They want to organize manipulated referendums to create Russian-aligned governments in the eastern regions of Ukraine. These governments would be endowed with broad powers, including authority over trade, investment, and security. Russia would then reach deals with these governments in an arrangement that would amount to annexation in all but name.

Frum goes on to make some interesting observations about the ambiguities in the idea of a federation. As he notes, although Russia proclaims itself to be a federation rather than a national state, it is actually governed from the center, allowing little autonomy for its so-called federal subjects. As Frum explains:

Russia, of course, is itself one of the most centralized nations on earth. The president appoints regional governors, who in turn handpick the Federation Council, Russia’s Senate. The central government controls most state revenue, the police— really, almost everything. 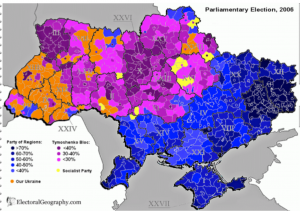 My main complaint with Frum’s formulation is his use of the term “nation” in the first sentence. Russia may be a centralized state, but that does not make it a nation state, much less a nation, as its constituent nationalities are categorized as separate entities. In Russia, even passports make it clear that Tatars, Chechens, Jews, and others do not belong to the Russian nation, as explained in a previous GeoCurrents post.

The kind of federation that Putin seems to envisage for Ukraine, however, is not the superficial variety epitomized by Russia, but rather the fully decentralized type in which the federal government has scant power, such as Bosnia and Herzegovina. Ukrainian nationalists loathe the idea of transforming their country into a loose amalgamation, seeing, like Frum, a pretext for de facto partition and Russian domination. But regardless of Russian designs, Ukraine will probably continue to have trouble cohering as tightly unified state, as its split between the generally Russian-oriented southeast and the nationalistic and Western-oriented northwest is too profound. In the 2004 presidential election, for example, the Russian-inclined candidate Victor Yanukovych won over 90 percent of the vote in two far east eastern oblasts (Luhansk and Donetsk), whereas his rival Victor Yushchenko took over 95 percent of the vote in two regions of the far west (Ivano-Frankivsk and Ternopil). Such deep polarization does not bode well for Ukraine’s political future.

As is evident (and as was explained in earlier GeoCurrents posts), Ukraine is thus divided into two political units by a line running from the southwest to the northeast. But both of the resulting “macroregions” are in turn politically subdivided. The remainder of this post will examine the divisions of the northwest, the heartland of Ukrainian nationalism. 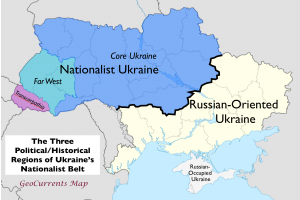 On the map to the left, I have labeled the northwestern half of the country “Nationalist Ukraine,” as distinguished from the southeastern “Russia-Oriented Ukraine.” Based on recent voting patterns, I have divided the former unit into three subregions. The first, labeled here “Core Ukraine,” is marked by pronounced but not overwhelming support for Ukrainian nationalists and Western-oriented politicians. To the west of the core is a smaller region composed of Lviv, Ivano-Frankivsk, and Ternopil oblasts, which is characterized by overwhelming support for Ukrainian nationalism along with 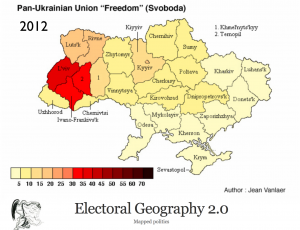 a strong measure of extreme nationalism. In this region, called here Far Western Ukraine, the Orange-Revolution hero Victor Yushchenko took more than 93 percent of the vote in 2004. In the 2006 election, the Far West, unlike neighboring oblasts to the east, generally rejected the Yulia Tymoshenko Block, supporting instead Yushchenko’s Our Ukraine. In the most recent election (2012), the extremist neo-fascist party Svoboda polled well only in this region, where it took more than 30 percent of the vote – and a plurality in Lviv. 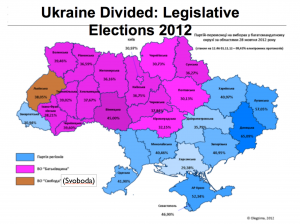 While the Far West is the most ardent part of Ukraine’s nationalistic greater northwest, the extreme western oblast of Zakarpattia barely fits the pattern. In 2012, the Russian-oriented Party of Region took a plurality of its votes. The extreme nationalist party Svoboda, moreover, is relatively weak here. Zakarpattia also distinguishes itself in its variable voting 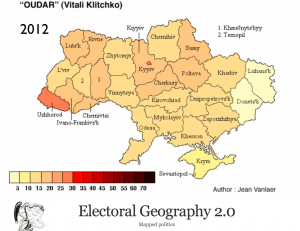 patterns, which separate district from district, as can be seen in the map of the 2006 election. Zakarpattia is also notable for having given a substantial percentage of its votes in 2012 to Vitali Klitschko, a former highly successful professional boxer dubbed “Dr. Ironfist” in reference both to his physically prowess and his educational attainment (he holds a doctorate in “sports science” and is an avid chess player).  Klitschko pushes for European integration, reduced corruption, and enhanced transparency, as well as lower taxes, but does not advocate cultural nationalism, viewing the language issues as relatively unimportant. 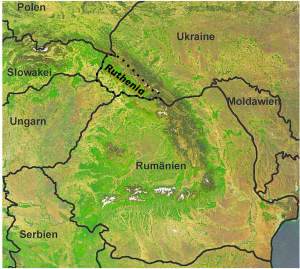 Zakarpattia’s distinctiveness is rooted in part in its physical geography. Located on the far side of the formidable Carpathian Mountains from the rest of the country, it is located in and on the outskirts of the Danubian Basin, also known as the Pannonian Plain. As such, it is much more easily accessible from Budapest, Bratislava, and even Vienna than it is from Kyiv (Kiev), let alone Moscow.

Historical-geographical patterns also help explain the political regionalization of “Nationalist Ukraine.” The main part of this region, which I dubbed “Core Ukraine” on the map above, was long under Polish-Lithuanian domination, but came under Russian rule with the partition of Poland in the late 1700s. Far Western Ukraine, on the other hand, passed from Polish rule to the Austrian (Habsburg) Empire, forming the 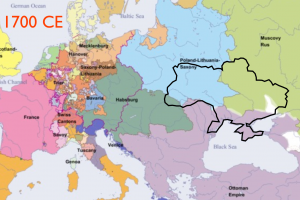 eastern portion of its region of Galicia. It was returned to Poland after World War I, and did not become part of the Soviet Union until the end of World War II. The Austrian period seems to have been crucial in nurturing the far West’s devotion to Ukrainian nationalism as well as identification with the West. The key factor here was the continued survival and indeed florescence of the Uniate Church, which had emerged in the late 1500s under Polish-Lithuanian rule, when the Roman Catholic Church successfully brought part of the local religious establishment under its umbrella as one of the so-called Eastern Catholic churches (such self-governing Catholic divisions were allowed to keep their own liturgies, as well as married priests). As explained in an excellent Wikipedia article on the history of Christianity in Ukraine: 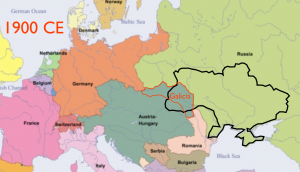 The Austrians granted equal legal privileges to the Uniate Church and removed Polish influence. They also mandated that Uniate seminarians receive a formal higher education (previously, priests had been educated informally by other priests, usually their fathers, as the vocation was passed on within families), and organized institutions in Vienna and Lviv that would serve this function. This led to the appearance, for the first time, of a large educated social class within the Ukrainian population in Galicia. As a result, within Austrian Galicia over the next century the Uniate Church ceased being a puppet of foreign interests and became the primary cultural force within the Ukrainian community. Most independent native Ukrainian cultural trends … emerged from within the ranks of the Uniate Church. The participation of Uniate priests or their children in western Ukrainian cultural and political life was so great that western Ukrainians were accused of wanting to create a theocracy in western Ukraine by their Polish rivals

Zakarpattia, or trans-Carpathian Ukraine, experienced a markedly different political history, as it was long part of Hungary, even during the period when Hungary was subordinated to Austrian power under the Hapsburg dynasty. It passed to Czechoslovakia in the inter-war period, and did not 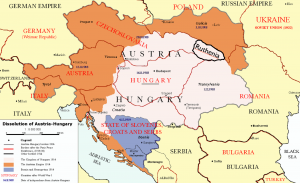 become part of Ukraine, and hence the Soviet Union, until the end of World War II. This region’s local “Uniate” Church, the Ruthenian Catholic Church, was mostly eradicated, or at least forced underground, by Soviet-era persecution. As a result, it maintained its structures most successfully among emigrant populations in the United States. Incidentally, the best-known American member of this community is the pop-artist Andy Warhol (1928-1987), born Andrej Varhola, Jr. in Pittsburgh, Pennsylvania. The Ruthenian Church’s main body in the United States, not coincidently, is the Byzantine Catholic Archeparchy of Pittsburgh.

(Note: the base maps used for the historical maps here is the Euratlas, an excellent source. )