Most borders in sub-Saharan Africa were drawn by European imperial powers who were blithely ignorant of preexisting polities and oblivious to ethnic divisions. The resulting mismatch between the political map and the cultural map has fueled many a separatist movement, yet the status quo remains sacrosanct. The consensus among African leaders—and the global political community—is that existing states must be maintained as they are, for fear of setting a precedent that could unleash ethnic rebellion across the continent. 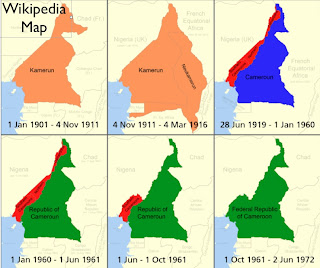 But not all separatist movements in Africa are based on animosity toward the boundaries imposed by Europeans. The leaders of Somaliland, as we have seen, seek not to overturn but to turn back to their region’s onetime colonial borders. They point out that a precedent for such change was established in 1993 when Eritrea, a former Italian colony, was allowed independence from Ethiopia, which had annexed it in 1951.

The leaders of the self-declared Republic of Ambazonia (or Ambazania) in western Cameroon make the same claim. Their land, they argue, was illegally incorporated into Cameroon when a small British colony was joined to a much larger French colony in 1961, a year after independence. The movement for an independent Ambazonia is non-violent, and largely ineffectual, receiving little support from other organizations. In 2005, however, it did gain membership in the Unrepresented Nations and Peoples Organization (UNPO).

The Ambazonia dispute arose from the disposition of Germany’s African colonies after World War I. From the late 1800s until 1916, Germany held sway over a vast territory it called Kamerun, geo-engineered to reach the heart of the Sahel at Lake Chad. In the post-war settlement, most of Kamerun went to France as a League of Nations Mandate (Cameroun), but Britain got the northwestern strip adjacent to its west African base in Nigeria. The British administered this new holding, which it dubbed Cameroons, through Nigeria but not as part of Nigeria; it was, in essence, a colony of a colony. Regardless of the indirect nature of British administration, English did spread through the region, just as French spread through the much larger area governed by Paris.

When Nigeria and Cameroun gained independence from Britain and France respectively in 1960, the issue of British-ruled Cameroons came to the fore. Plebiscites were held to gauge popular sentiment, giving the people of the region the choice of union with Nigeria or with Cameroun; independence was not an option. Northern Cameroons, a Muslim region, opted for union with Nigeria, whereas the largely Christian south voted for union with the former French colony. The end result was the creation of the Federal Republic of Cameroon, whose federal nature allowed considerable autonomy to the English-speaking western provinces, forestalling language-based unrest. That was to change in 1972, however, when a new constitution proclaimed the United Republic of Cameroon. With the creation of a unitary government, the people of the former British provinces began to feel marginalized. A quarter-century later, the Republic of Ambazonia was proclaimed on December 31, 1999.

The Ambazonian movement has received little attention in the global media. The Washington Times, to its credit, ran an article in 2008, after representatives from the would-be country presented their case in Washington D.C. That story, in turn, prompted a posting on the National Review’s blog, The Corner, entitled “Ambazonia for the Ambazonias.” The post consisted of a single sentence: “Can we at least agree that the liberation struggle of Ambazonia is absolutely none of our business one way or the other?”

Anglophone-Francophone political disputes are not limited to Cameroon. Geocurrents recently explored the challenges of Vanuatu, a former British-French condominium that ended up with competing English- and French-speaking elites. Rwanda is another example: a traditionally French-speaking country that has been tending toward English ever since a Uganda-based rebel movement seized power after the genocide of 1994. Yet in Cameroon, there are signs that a linguistic accommodation may be occurring. In the country’s main cities, the two languages are hybridizing to produce a new common tongue, “Camfranglais” (from camerounais, français and anglais). The new language evidently emerged in the markets, ports, and playing fields, propelled in part by popular music. According to the BBC, in Camfranglais, “Tu as sleep hier?” means “Did you sleep well last night?”, while “Tout le monde hate me, wey I no know” is “Everybody hates me, I don’t know why.”

(Many thanks to Matthew McDevitt for his assistance with this post)