(Note: Today’s post is by Claire Negiar, a Stanford senior, soon to graduate. Claire will be writing a few posts over the coming weeks, many of them focused on France and French dependencies.)

Saint Martin. Sint Maarten. A crossroad between North and South, split between France and the Netherlands, Saint Martin has known a different fate in the aftermath of decolonization than most other Caribbean islands. Although the European colonial powers of Britain, France, the Netherlands, Spain, and even some of the Nordic nations usually battled it out for sovereignty over Carribbean islands in long back-and-forths, on the island of Saint Martin, the two main contenders chose a different path: that of peaceful coexistence. But what enabled Saint Martin to be successful in its division, while so many other attempts at dividing territory across the world have failed? And how have France and the Netherlands been able to coexist and build a coherent island community despite this division?

One hypothesis would be that the early colonization of Saint Martin has given time the chance to smooth over the conflicts and the disputes that resulted from this dual presence. Indeed, borders were disputed for some time before matters were settled: between 1648 and 1816, conflicts changed the border sixteen times. In the end, the French came out ahead with 54 km2 to the 41 km2 of the Dutch side. The French and Dutch had both coveted the island: while the French wanted to colonize all the islands between Trinidad and Bermuda, Dutch interest in Saint Martin stemmed from a desire to have a convenient halfway point between their colonies in New Amsterdam (today New York) and Brazil (temporarily taken from Portugal). Because there were few people inhabiting the island, the Dutch easily founded a settlement there in 1631, erecting Fort Amsterdam as protection from invaders. Soon after, the Dutch East India Company began salt mining operations. French and British settlements sprang up on the island as well, which attracted the Spanish conquistadores’ attention: taking note of these successful colonies and wanting to maintain their control of the salt trade, they suddenly found St. Martin much more appealing than it had been. What is more, the Eighty Years’ War, which had been raging between Spain and the Netherlands, provided further incentive to attack. The Spanish forces captured Saint Martin from the Dutch in 1633, seizing control and driving most or all of the colonists off the island. Although the Dutch retaliated in several attempts to win back the island, these were unsuccessful. 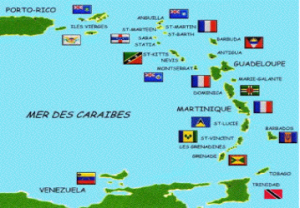 However, fifteen years after the Spanish conquered the island, the Eighty Years’ War ended and the Spanish lost their inclination to continue defending the island. They deserted the island in 1648 and, when this happened, both the Dutch and the French jumped at the chance to re-establish their settlements. Dutch colonists came from St. Eustatius, while the French came from St. Kitts.

After some initial conflict, both sides realized that neither would yield easily and, preferring to avoid an all-out war, they signed the Treaty of Concordia in 1648, which divided the island in two. In spite of the treaty, relations between the two sides were not always cordial. We can therefore see that Saint Martin’s history was off to a rocky start as well, and that things were not always as smooth as they are today. 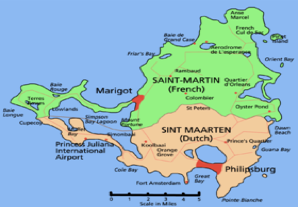 Some elements of the initial partition of the island may, however, help explain why it has largely been successful. Indeed, the French and the Dutch realized it was in their interest to sign a treaty giving each of them roughly half the territory. In a game of prisoner’s dilemma, the French and the Dutch would therefore both have chosen the option of “lying low,” resulting in the most beneficial split for both, instead of choosing the “equilibrium” strategy of attacking behind the other’s back, resulting in a sub-optimal resolution where there is also an intense mistrust.  All of the provisions of the 1648 Treaty of Concordia are still in force on Saint Martin today, thus showing that it has at least passed the test of time.

Another interesting point is the fact that the native population of Saint Martin was minimal, and that the population of the island has grown from both colonial settlements. That is to say, the indigenous peoples were overpowered and vastly outnumbered by the colonial powers, and that today the population is roughly split at 50% between the French and the Dutch sides, with 35,518 in Saint Martin and 37,459 in St. Maarten. Overall, the island’s population is highly mixed, with people from over 120 countries, speaking English, French, Haitian/Guadeloupe/Martinique Creole, Papiamento (a Portuguese-based Creole from the Netherland’s islands of the southern Caribbean), Dutch, Spanish, Portuguese, and even Italian. It seems that this intense melting pot helps defray cultural tension, as the island is not just a split between forty thousand Frenchmen and forty thousand Dutch. On Saint Martin/St. Maarten, languages, cultures, religions, and ethnicities mix and mingle, and as a result the fact that the island is split between the Netherlands and France has taken a secondary place.

Though initially a part of the French region of Guadeloupe, French Saint Martin more recently experienced a major geopolitical change. The constitutional reform of March 28th 2003 on the decentralization of the French Republic brought about transformation in the status of the overseas territories. The new law laid down a framework for developments in the status and administration of overseas “Collectivités”. In December of 2003, at the request of the municipal council, a referendum was held on Saint Martin on the island’s constitutional status under the framework of Article 74 of the Constitution (which allows the creation of a “collectivité” with a special status); a clear majority (76.17%) of the Saint Martiners voted in favor of this change. Since December 2007, Saint Martin has been a leader of the French decentralization process under this new article of the constitution.

A somewhat similar change occurred on the Dutch half of the island.  In 1957 the Netherlands excluded the Netherlands Antilles from European Territory at the signing of the Treaty of Rome, which created the European Economic Council, forerunner of the EU, cementing its status as a colonial possession. On October 10th, however, 2010, Sint Maarten however became a constituent (i.e., non-sovereign) country within the Dutch Kingdom, giving it an equal status to Aruba, Curacao and, theoretically, the Netherlands itself. Today, the government of the “Country of St Maarten” is a parliamentary democracy.

As such developments show, the two mother countries on the island have been willing to loosen their grasp on the island and offer a certain degree of self-rule to the local population. Such accommodation is rooted in part in the island’s demographic diversity, but mere distance probably plays a role as well. If Saint Martin were closer to France and the Netherlands, would these two countries be more inclined to resist this slow relinquishing of control?  The island’s small size, and its lack of resources, has probably played a role as well.

The fact that Saint Martin has gained substantial autonomy is also synonymous with a loosened fiscal policy, which is advantageous to many wealthy French citizens. The same situation is found in other French dependencies, although the French government claims that it wants to crack down on the resulting financial irregularities. Because of their special status, Saint-Martin, Saint-Barthélémy, Tahiti, and Wallis-et-Futuna all function, to a certain extent, as tax havens and money-laundering hubs. These « Collectivités d’Outre Mer » all benefit from complete autonomy in terms of fiscal and customs policies. The political division of the island of Saint Martin complicates this situation, although sovereignty is divided, no formal border separates the two parts of the island;  one can weave in and out of the two countries without even knowing it.

Walking between the Dutch and French sides of the island of Saint Martin, the biggest difference is that of scale: while the Dutch side boasts very large hotels, nightclubs, casinos, and cruise-ship tourist populations, while the French side is home to smaller-scale hotels, restaurants, and, in true French form, a few topless beaches. What is more, financial institutions on the Dutch and the French sides have a policy of cooperation, thus making money-laundering relatively easy. Indeed, according to UN and European Commission consultant Michel Koutouzis:

“You arrive with black-market money in a Casino on the Dutch side. You are told to sit at a given table for an hour. The casino makes you win a pre-arranged sum, which is a common practice in tax-havens. Once you collect your winnings, you can go invest them on the French side in real-estate or marina projects.”

Today, two main issues have been plaguing the island, French and Dutch sides alike: drugs and disease. The Wall Street Journal recently published an article about the dispersion of the chikungunya mosquito-borne virus across the Caribbean, fearing its spread to the United States and throughout the Americas. 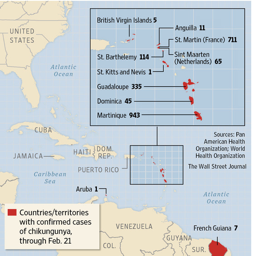 The virus, originally from Africa and southern Asia, causes fever and intense muscle and joint pain for weeks and, in some cases, years. There is currently no vaccine or cure. On December 10, 2013, the WHO confirmed the first two cases of chikungunya that were acquired locally rather than imported, on the French part of the island of St. Martin. As of Feb. 21, the Pan American Health Organization, a regional WHO entity, had confirmed 2,238 cases of the disease in the Caribbean—from Martinique to the British Virgin Islands.

Drug consumption and ease of access has been another concern for the island: both cannabis and heroin are relatively cheap on the island, and are thus prevalent and heavily consumed. Reducing the drug consumption and creating an environment in which people feel comfortable to seek out help remain top priorities for the local government.

Although the island of Saint Martin is divided, it benefits from surprising synergies between its two sides, with a shared but diverse cultural background, and a reputation for delicious food and beautiful beaches. However, the two sides of the islands also share the common challenges of disease, drugs, and regulating financial institutions to avoid money-laundering and tax evasion. Today, although politically divided, Saint Martin largely functions as a unified country, with the minor anomaly of having two separate official languages in different areas. Although not necessarily an example of perfect governance or exemplary policy, Saint Martin provides lessons for other regions of the world about successful coexistence. But is this model reproducible anywhere else in the world, perhaps in such a conflict-ridden and divided country as Cyprus, or is it too idiosyncratic of a situation to be generalizable to any other parts of the world?