GeoCurrents has taken a summer hiatus to create a new cartographic framework for analyzing socio-economic development. This project is a collaborative effort involving three team-members: Jake Coolidge, a geospatial historian at Stanford University’s Spatial History Lab; Anne Fredell, a Stanford University undergraduate; and myself. The Spatial History Lab at Stanford, which has provided extensive technical assistance, will eventually publish the maps as an on-line document. GeoCurrents will also post maps from the project, as well as commentary on the process. Beginning today, I will discuss both the intellectual rationale for such an atlas and the problems that we have encountered in creating it.

The Non-Comparability of Sovereign States 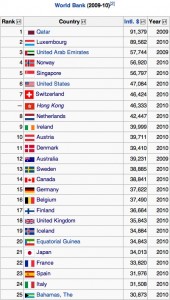 Global economic and social comparisons are almost always made within the framework of sovereign states. Countries are numerically ranked against each other on such measurements as per capita GDP, literacy, and longevity, much as students are tallied together on a class grade sheet. If one wants to know what part of the world is the richest, healthiest, or best educated—or the opposite—the answer will generally come in the form of a national name. Whether on maps, tables, or charts, the country is the category that counts.

Our atlas starts from the premise that, while sovereign states are certainly the essential units of the geopolitical order, they are not necessarily appropriate units of socio-economic comparison. In actuality, countries are ill suited for such purposes. For starters, they are simply not comparable entities, varying enormously in both area and population. We know this, but we rarely let it truly sink in. Consider the discrepancy between China, with 1.3 billion inhabitants, and Tuvalu, with ten thousand. Comparing these two independent states is like weighing a single person against a city of 130,000. To appreciate the absurdity of such an exercise, consider what it would mean to compare either with a hypothetical entity equally far removed in the opposite direction. A country as small relative to Tuvalu as Tuvalu is to China would be inhabited by one twelfth of a person, while a country as large relative to China as China is to Tuvalu would be a galactic polity of 160 trillion inhabitants. No serious study would ever make such a comparison, spanning more than five orders of magnitude. Yet when it comes to assessing the economic and social conditions of the world, making such gargantuan leaps in scale is the price we pay for using country-based data. 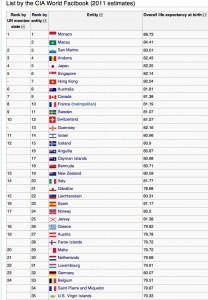 Relying on an inappropriate geopolitical framework for social and economic analysis can quickly leads one astray. Consider the CIA World Factbook’s list of countries by average longevity (a list that is replicated in Wikipedia). Surprisingly, one country stands well above all others: Monaco. Whereas twenty-four entries are crowded in the eighty- to eighty-four year life-expectancy range, miniscule Monaco reaches almost ninety (89.7). Intriguingly, the third and fourth places are also occupied by European microstates: San Marino and Andorra. As it turns out, most of the top positions on the CIA list are taken by small, tiny, and smaller-than-tiny polities located in Europe, eastern Asia, and the Caribbean. As a result, some of the seemingly healthiest and wealthiest major countries do not rank particularly high on the longevity index. Germany comes in 32nd out of 223, the United Kingdom is 36th, and the United States trails well back at 50th. A quick glance at the table might make it seem as if the U.S. were bested in life expectancy by almost a quarter of the world. In actuality, the total population of the forty-nine top entries is less than ten per cent of the global sum. That is not exactly a stellar showing for the U.S., especially considering the fact that it is bested by several much poorer countries, including Jordan and Bosnia. Still, the fiftieth-place position indicated by the Factbook is misleadingly low.

The preponderance of microstates in the upper reaches of the longevity list could easily lead to erroneous deductions about country size and public health. The correlation, after all, is striking: sixteen of the top fifty entries on the list have fewer than 100,000 people, while none of the bottom fifty do. One might reasonably conclude that small polities are somehow better able to meet the health needs of their citizens than their more populous neighbors. Could political devolution enhance longevity?

Any such conclusion would be nonsensical. The people of Andorra, a feudal remnant in the Pyrenees sandwiched between France and Spain, may live longer than the average residents of neighboring countries, but they do not out-live the inhabitants of adjacent French and Spanish districts. Put differently, if all Europe were divided into states the size of Monaco (population 36,000), Monaco’s sizable advantage would instantly vanish, as other tiny, wealthy enclaves located in salubrious environments would boast similar longevity figures.

In the end, the CIA rankings are compromised by comparing incommensurable entities. But it is not just the World Factbook that is at fault here. Virtually all numerical assessments of global development shoehorn socio-economic data into the same geopolitical categories, where size means nothing. In the world of international statecraft, to be sure, all sovereign countries are treated as theoretically equivalent individuals, regardless of their population or power. Such pretense may be necessary in the halls of diplomacy, but it does not help anyone grasp the complex patterns of social and economic disparity found across the surface of the earth.

While most global comparisons are made strictly within the framework of sovereign states, which number slightly fewer than 200, the CIA World Factbook employs an expanded list, noting 223 “countries” in its longevity chart. The additional entries are actually dependent territories, most of which boast impressive life-expectancy figures (Cayman Islands, Bermuda, Gibraltar, the Isle of Man, etc.). Such an inclusive approach is beginning to be followed by other major data sources as well, no doubt from a desire to be fair and comprehensive. Just because Greenland and Guernsey lack full independence is no reason to consign them to statistical oblivion. In the process, however, the problem of incomparability is compounded. While all of the world’s independent countries (barring the anomalous Vatican City) have at least 10,000 inhabitants, many dependencies are much smaller. Wikipedia’s inclusive “list of countries by population” bottoms out with 224th-place Pitcairn, which boasts all of fifty residents at last count. Although Pitcairn does not make the CIA’s longevity table, a number of other miniscule dependencies do. Adding these micro-units clutters the list while providing little information of value.

The biggest distortion that results from using states or quasi-states as all-encompassing spatial containers for socio-economic comparison is that lightly populated areas might receive precise scrutiny, while some of the world’s most populous places are subjected to extraordinarily crude aggregation. As a consequence, the residents of small countries literally count for more than do the residents of large ones. An equal appraisal of individual polities, in other words, results in an intrinsically unfair weighting of the individual persons within those polities. In the World Factbook’s tabulation, the average inhabitant of the British dependency of Saint Helena, Ascension and Tristan da Cunha (population 5,660) is inadvertently deemed twenty-six million times more attention-worthy than the average resident of China.

China and India, the world’s demographic giants, are particularly ill-served by being treated as singularities. Not only do these two countries have huge populations—more than a third of the global total between them—but both are characterized by vast regional disparities. As a result, numbers given for China and India as a whole are almost worthless. When overall per capita GDP is calculated in terms of purchasing power parity, China’s $7,500 figure ranks well below the global average of $11,100. But the commercial core areas of eastern China, increasingly vital drivers of the world economy, evince per capita GDP figures well above the world average, reaching $13,000 in Jiangsu, $18,500 in Shanghai, and $46,000 in Hong Kong. In contrast, Guizhou in China’s south-central interior produced only $3,400 worth of goods and services per person in 2010, a figure comparable to that of war-ravaged Iraq. In global comparative terms, China spans the gap between the rich and poor worlds. Grasping such regional differences is essential for understanding the economy of China, and hence that of the world. Yet in the standard method of tabulating and portraying global economic data, such disparities remain invisible.*

The depiction of the world as divided into supposedly comparable individual geopolitical entities reaches its extreme form in a number of almanacs and children’s atlases in which each country is accorded its own map and page or two of text. In such cases, China typically receives a bit more attention than Tuvalu—but not much. The genre is nicely parodied in Our Dumb World: The Onion’s Atlas of the Planet Earth. Its mocking caption for San Marino, whose 32,000 people inhabit twenty-four square miles, reads, “These A**holes Don’t Belong In An Atlas,” while the text focuses on the absurdity of elevating such an insignificant piece of territory to the same level as that of major countries. A sidebar, entitled “A Marino You Should Care About,” claims that “Miami Dolphins quarterback Dan Marino achieved more during his 17-year Hall of Fame career than the ‘nation’ of San Marino has managed to accomplish since A.D. 301.” In actuality, the history of the little state is rather more illustrious than that; in early modern Europe, San Marino was often highlighted by geographers because of the fact that it was a rare republic (officially, “the most serene republic”) during a period of monarchical dominance. But the humorists at The Onion have a point; putting San Marino at the same level as Italy, let alone India, is an exercise in absurdity.

How might such absurdity be avoided? This is a complex issue that will occupy the pages of GeoCurrents over the next several weeks.

* Hong Kong, a Special Administrative Region of China, with its own laws and currency, is usually tabulated separately from the rest of the country