GeoCurrents returns to publication this week. New posts are planned for each weekday going forward. Two themes will command our attention for the remainder of this summer. One is a GeoCurrents atlas of global human development, which will entail original maps based on the UN’s Human Development Index. Today’s post gives an indication of what this atlas will look like. Posts on this topic will alternate irregularly with ones derived from a much larger project that I have been working on since GeoCurrents went into suspension in 2016. This project, called Seduced by the Map: How the Nation-State Model Prevents Us from Thinking Clearly About the World, will be explained and outlined in tomorrow’s post. Starting in late September, GeoCurrents will turn its attention to current global events. These posts will be done in conjunction with a Stanford Continuing Studies (adult education) class that I will be teaching remotely in the Fall Quarter called “The History and Geography of Current Global Events.”

The Human Development Index (HDI), created by the United Nations, is described by the Wikipedia as “a statistic composite index of life expectancy, education (mean years of schooling completed and expected years of schooling upon entering the education system), and per capita income indicator, which are used to rank countries into four tiers of human development.” The information used on most of the HDI maps that I will be posting is from 2019, most recent year in which comprehensive global data is available. The HDI, like other development indicators, is far from perfect and the data used to construct it are not always reliable. But it is the most referenced measurement of global human development, and it can be used to make maps at the subnational level across the world.

The maps that will posted ignore the UN’s four-tier scheme of “very high, high, medium, and low” social development, instead arraying countries into a larger number of categories. These maps also break down large countries into their first-order division (provinces, states, etc.) to convey regional variation more finely. Many of these maps are based on unconventional world regions, such as the South China Sea region and Greater Central Asia.

The two maps posted today, showing human development levels in the core part of North America, give an indication of how the atlas will look. The first map shows HDI levels in independent countries. The pattern seen here is simple: The United States and Canada are at the top, slotted into the same high-level category. In 2019, these two countries had almost identical HDI figures, with Canada coming in at .929 (15th highest in the world) and the United States coming in at .926 (16th highest). Mexico was rated significantly lower, at .779, but that figure still puts it in the UN’s “high social development” category. Northern Central America is shown to be significantly lower, and Haiti much lower still. Honduras posts the lowest figure in Central America, coming in at .634. This puts it in the U.N.’s “medium human development” category. 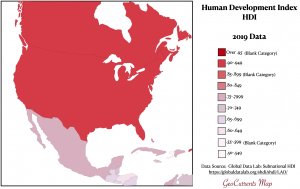 On this map, only Haiti, with a figure .510, is slotted in the “low human development” category. Elsewhere in the world, however, much lower figures are found. According to official statistics, three African countries, Niger, Central African Republic, and Chad, come in at below .40. Somalia probably has a significantly lower figure, but it is excluded from most tabulations for having unreliable or unavailable data. One Wikipedia article, however, places Somalia at only .361, giving an appalling low number of .232 for its Middle Juba region.

When the larger countries in this part of the world are broken down into their main political subdivisions, a somewhat different picture emerges. The United States is shown to be slightly more regionally differentiated than Canada, with three states (Minnesota, Massachusetts, and Connecticut) posting figures above .95. Only three independent countries, Norway, Ireland, and Switzerland, fall into this exceptionally high category. Several southern U.S. states post figures below .90, as do two Canadian provinces in the Atlantic maritime region (Newfoundland and New Brunswick). Neighboring Nova Scotia just misses this category, with a figure of .903. 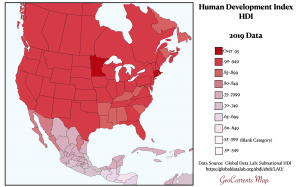 This map also shows relatively wide levels of differentiation across Mexico, with much higher HDI figures found in the north and much lower one in the south. Although the U.S.-Mexico border is easily visible in this map, the Mexico-Central America border disappears. The heavily indigenous southern Mexican state of Chiapas, with an HDI figure of .698, falls into the same category as neighboring Guatemala (at .663).