GeoCurrents is pleased to announce the addition of two summer interns, Chris Kremer and Nick Baldo. Chris and Nick will be cataloging the various maps that have appeared on the site and will be contributing occasional GeoNotes and news posts.

Nick Baldo is a native of Westmont, Illinois, who recently completed a BA degree in economics at Stanford. His main academic interests are the economic and environmental histories of the ancient Mediterranean and the 19th century U.S. Nick reports that “when a situation seems very difficult to understand, it’s usually due in part to a scarcity of good maps.” He also enjoys playing the various iterations of the Civilization series of computer games, which he claims should be loved by any historically or geographically inclined gamer.

Chris Kremer hails from Stamford, CT, and recently finished his freshman year at Stanford University. His academic interests include the history of Southeast Asia and Imperial China, geography, and geology. He is also interested in current maritime and territorial disputes. In his free time Chris enjoys browsing through atlases, playing badminton, and reading.

The existing description of GeoCurrents in the “about” section of the site is dated, and hence will be replaced with the following information:

GeoCurrents is a map-illustrated forum dedicated to the global geography of current events. It provides historical background, regional analysis, and political and intellectual context for events, both major and minor, as long as they bear on larger issues and have a clear geographic expression. The site also emphasizes linguistics, as the spatial patterning of language and the geographical distribution of speech communities have profound bearing on the human condition.

Essays in headline section of site—Peoples, Places, and Languages Shaping Current Events—showcase geopolitical, historical, cultural, and linguistic intricacies that are usually by-passed by mainstream media accounts. While conventional news stories are usually content to note, for example, that Syria’s embattled government is dominated by the Alawite minority, members of a Shiite-derived sect, GeoCurrents delves deeper. It outlines Alawite beliefs, maps where most Alawites live and explains why that matters, and describes the ways in which Syria’s history of sectarian division has shaped its political evolution. The headline section of GeoCurrents often runs “mini-series” of two or three posts on the same general topic, and it occasionally lingers on particular places for as long as a month. The posts from such longer “focused series” have been gathered together and organized under a multi-colored bar on the homepage. All of the main GeoCurrents posts are accessible through the “master map,” located at the top bar of the homepage.

A secondary section of the site, “GeoNotes: Miscellaneous Maps and Items of Interest” features shorter posts, typically 400 to 1,000 words, that generally highlight innovative, useful, or elegant maps and other types of geographical information. Also found here are critiques of particularly shoddy or misleading maps in the media and reference works, and discussions of the deceptive marshalling of statistical information, and of geographical misinformation more generally. GeoNotes occasionally ventures further afield, with such offerings as geographical and linguistic quizzes and basic data on geographical superlatives, such as “the world’s largest hole”. 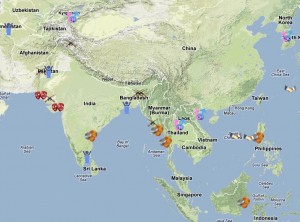 The third principal section of the site is the Events Map, where subject-icons key into brief stories of noteworthy yet generally overlooked topics. The map aims to provide relatively even coverage across the world, and hence often provides news on out-of-the-way places, such as the Pilbara region of northwestern Australia. The icons are organized according to topic—classified as “political,” economic,” “environmental”, and so on—although in many cases categories overlap. Event-Map icons fade out after two weeks; older news posts can be accessed through the rectangular button at the top of the homepage, next to the Master Map.

A “map repository” section is currently under construction and will appear within a month or so. Here maps used on the site—many of which were made expressly for GeoCurrents—will be cataloged. Most original maps are at the global scale. A number of them stake out alternative methods of portraying the world. One example is the GeoCurrents classification of continents, which provides an unconventional view of the most basic divisions of the world. Another departure from the standard global depiction is the Demic Atlas, a non-state-based series of maps of global social and economic development. These demic maps are offered as a complement to the familiar division of the world into sovereign countries—a topic that lies at the core of GeoCurrents’ conceptual concerns.

Finally, it is essential to note that GeoCurrents aims to be instructive rather than polemical. Controversial issues are often discussed, but the goal is to approach each new issue on its own terms, without an overarching theoretical commitment or predetermined position. While local perspectives and divergent views are incorporated and analyzed, seldom is a particular perspective endorsed. In practice, of course, maintaining a completely disinterested attitude to ongoing global conflicts is not possible, but fair-mindedness and impartiality remain our guiding ideals. Comments and criticism from informed readers are always welcome, but this is not a forum for venting political or ideological frustrations or for pursuing nationalist tussles over mythologized histories. Offensive or hateful comments will be erased, and repeat offenders can be banned from commenting on this site.