As long-term readers of GeoCurrents know, the site’s two authors (Asya Pereltsvaig and Martin Lewis) are currently working on a book on the origins of the Indo-European language family and the controversy that surrounds it (see the GeoCurrents “focused series” on this issue). Over the past nine months, we have been attempting to balance our work on the book manuscript with our teaching obligations, our GeoCurrents posts, and our other academic responsibilities, which are considerable. As our manuscript deadline (December 31) approaches, we must reluctantly admit that we need to spend more time on the book and less on this website. As result, we will be posting only two GeoCurrents articles per week over the next two months. Most, and perhaps all, of these posts will be by Asya, as Martin will be devoting most of his attention to the book, in addition to teaching Global Human Geography to 94 Stanford students and finishing the revisions of his chapters for the sixth edition of Diversity Amid Globalization. Blogging with also be relatively light through January, as both authors will be traveling to Rome at the end of the month to present their arguments about Indo-European origins at an international linguistics conference.

If all goes according to plan, GeoCurrents will resume an active schedule in February, with at least three and perhaps four or more posts per week. 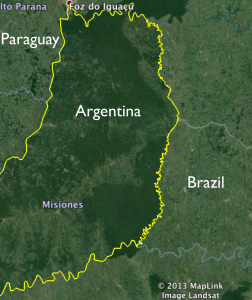 In the meantime, the illustration for today’s post comes from a temporarily abandoned idea for a series on geopolitical boundaries that are visible from space. It is well know that  the division between Haiti and the Dominican Republic can be detected from satellite images, due to extensive deforestation on the Haitian site. But many other boundaries are just as easily picked out. My favorite example is presented here: the northeastern Argentine province of Misiones is far more heavily forested than are adjacent areas in both Brazil and Paraguay, and hence can easily be see in Google Earth imagery.

Friday’s post will feature another intriguing geo-quiz, with the answer presented on Monday.

Many thanks to all of our readers!