Attentive readers may have noticed a small “advertise on GeoCurrents” banner on the website. This feature was added after the blog was approached by several firms interested in posting ads on specific pages that pertain to tourism. In accommodating advertisers, GeoCurrents seeks not to become a profit-making venture, but rather merely to defray some of the costs of running the site. The ultimate finacial goal is to break-even, which currently seems rather distant.

In regard to commercial endeavors, I would like to draw readers’ attentions to the new firm of Kevin Morton and his partner, Jordan Sandoval, K&J Web Production.  Kevin has been managing GeoCurrents for the past half year, after having completely revamped the site’s look and feel. I have been more than pleased with his work, and I would urge anyone interested in hiring outside help for website design and management to contact K&J Productions. According to their promotional materials:

K&J Web Productions as an alternative way for individuals, groups, or small businesses to create elegant and effective websites at the web-savvy college student price. The idea was born out of learning that many businesses in our hometown of San Diego were shelling out ridiculously high monthly payments for mediocre websites. We thought, why not offer an affordable price for a beautiful site? It can be done, and that’s what we’re looking to accomplish. We have a passion for making valuable information, such as that found on GeoCurrents, available in a way that is optimized with technical nuance, making it easily accessible to web surfers.  As a result, we offer academic or article-based pursuits a 50% discount off our normal development rate, and we invite such non-commercial endeavors wholeheartedly.

On a completely different note, GeoCurrents recently criticized The Economist for its use of “crude British slang.” Several readers objected, asking for specific examples—which I could not supply. This week’s edition of the magazine happens to contain several choice instances, all from the “United States” section of the publication. 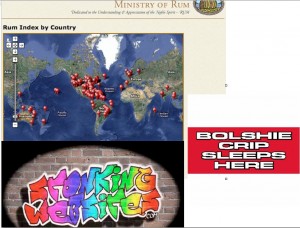 On page 36, an article on the alleged Iranian bomb plot begins with the assertion that “Iran is a rum country…” A rum country? In querying my family members about the meaning of this term, I received responses varying from “bad” to “drinks a lot of alcohol.” (Jamaica is the quintessential “rum country” to some; see the “rum index” map.) Yet according to the standard definition, “rum” is a “chiefly British term” primarily meaning “strange” and secondarily meaning “presenting danger”—presumably the author had the latter usage in mind. A few pages later (42), an article on Chinese-U.S. relations informs us that the American senate recently passed a bill by a “stonkingly bipartisan margin.” Stonkingly? No one in my family had ever encountered the word “stonking.” Based on context, we all assumed that it means “big.” Yet according to the Urban Dictionary, “stonking” is a “British colloquial expression” meaning “impressive” or “wonderful.” On very next page, the “Lexington” opinion columnist informs his or her readers of the “general bolshiness of assorted Russians, Arabs, and Persians…” Bolshiness? My family members were clueless here, with one volunteering that it might mean “squishiness.”  I had previously encountered “bolshie” as a slang term for “Bolshevik,” and I therefore assumed that the author was arguing that Marxist political beliefs are common in Iran, Russia, and the Arabic-speaking world, a view that is difficult to support, especially for the Arabic realm. The Free Dictionary, however, tells us that this “Brit informal” term actually means “difficult to manage; rebellious.” (A secondary definition, however, does pertain to the radical political left.) Oddly, a Google image search for “bolshie” yields many photos of naked women.

The question remains open as to the effect that such British slang has on the magazine’s large non-British readership. Clearly some confusion is generated, as demonstrated by my querying of an admittedly small sample of American English speakers. But the same group also found the terms quaint and colorful, valuing the British flavor (flavour?) that they impart to the magazine. Rum perhaps, but evidently stonking nonetheless.