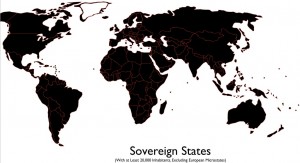 GeoCurrents has been inactive recently, as I have been working on a non-state-based atlas of economic and social development that will appear on the blog later this summer. This project has been demanding, in part because all the information necessary to construct the maps is gathered by, and organized around, states! The new maps will also be much more sophisticated than the maps previously used on GeoCurrents, as they will be based on GIS (geographical information systems) techniques. Previously, all original GeoCurrents maps have been made by hand in Keynote, the Apple presentation program that competes with PowerPoint. Making such maps involves the laborious process of outlining the shapes of geopolitical units on basic maps held in the public domain. Once the outlines have been made, the resulting country-shapes can be easily manipulated through a few simple clicks, allowing one to instantly change country color, boundary color and thickness, and so on.  Keynote’s “shape” feature allows one to easily draw on the maps to show additional features.

Several of these GeoCurrents base maps are now available for free download here:

If one has an Apple computer and the Keynote program, the maps are remarkably easy to use: just click on a country (or US state) to change it as you see fit. Keynote’s transparency feature is quite useful as well. Country shapes can also be dragged out of place and then placed back where they belong (to place shapes precisely, make sure that the “guidelines” are turned off). The download includes maps of the world, Europe, Asia, Africa, the United States, and a part of the Middle East. Feel free to use these maps as you like.

If you carefully examine these maps, you will see that that the boundary lines are not necessarily of uniform thickness, as the boundaries of adjacent states are not always perfectly traced over each other. One can improve the fit, however, by clicking twice on a given country, focusing in on a segment of its boundary-zone, and then dragging the circles that form the outline to align them more closely with the outline of a neighboring state. It may sound complicated, but Keynote is relatively easy to use, as most of its steps are intuitive.