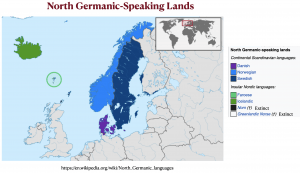 As was largely the case across the world, the development of national languages in the Germanic zone of northern Europe was more the product of state consolidation than the reflection of preexisting ethnolinguistic communities. As this process is most clear in the North Germanic region of Scandinavian, we will begin there. 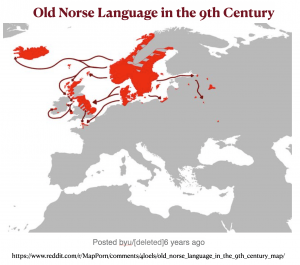 At the dawn of Viking Age, circa 800 CE, the core area of Scandinavia (most of today’s Sweden, Norway, and Denmark) was linguistically unified, its people speaking Old Norse. A single language found over so large an area in pre-modern times indicates the rapid expansion of the people speaking it. Norse expansion would continue for several centuries, taking its speakers, as both settlers and conquerors, to Iceland, Greenland, Britain, and beyond, although only in previously uninhabited Iceland would their language persist. At the same time, Old Norse was gradually differentiating, eventually forming a complex dialect continuum. Neighboring dialects remained easily understandable, but those located at further distances had reduced mutual intelligibility. 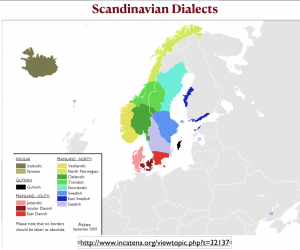 Yet even today, the national languages of mainland Scandinavia come close to mutual intelligibility. The ability of individuals to make sense of other North Germanic languages, however, is not necessarily reciprocal; Norwegians can supposedly understand Swedish and Danish much more easily than Swedes and Danes can understand each other (see below). More to the point, the everyday spoken dialects that persist, especially in peripheral rural areas, tend to cut across political boundaries (as can be seen on the map posted here). As this map indicates, the Scanian dialect of southern Sweden is regarded by most linguists as a form of Danish rather than Swedish. Swedish linguists, however, usually analyze it as a variant of their own language. Caught between contending national forces, some local activists have campaigned for Scanian to be recognized as a distinct language. Some even view Scania as a separate nation that deserves independence. 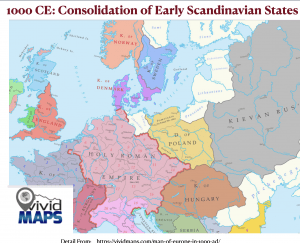 States began to emerge in Scandinavia during the Viking age, as local leaders enhanced their power and expanded their domains. By the year 1000, the precursors of the region’s modern countries had come into existence as the Kingdoms of Norway, Denmark, and Sweden. (Note on the map posted here that Denmark originally included Scania, which only became part of Sweden in 1658.) Cultural affinity and worries about the power of the Hanseatic League of the north German cities led to a loose merger of the three kingdoms in the Kalmar Union, created in 1397. This union dissolved with the exit of Sweden in 1523, but Denmark prevented the Kingdom of Norway from doing the same. Norway finally seceded in 1814, but it was soon annexed by Sweden as a semi-autonomous kingdom. It would not gain independence until 1905.

The development of national languages in Scandinavia arguably began with the Protestant Reformation of the sixteenth century, when Lutheranism spread quickly across the region. As Latin was displaced as the language of religion, the Bible was translated into the dialects used in the core regions of both Sweden and Denmark. The process of national language development intensified during the nineteenth century as popular writers nurtured national consciousness. In Denmark, Hans Christian Andersen, noted for his fairy tales, is often regarded as exemplifying this trend.[i] The nationalistic focus on the Danish language received a further boost in the 1860s with the kingdom’s loss of its largely German-speaking southern regions, Schleswig and Holstein, to Prussia. (This was a crucial event for the subsequent unification of Germany). 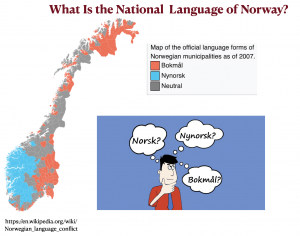 Norway, lacking independence, did not experience the early development of a national language. Danish long served as its written language, while most of its people spoke dialects that are sometimes regarded as intermediate between Swedish and Danish (as the American linguist Einar Haugen put it, “Norwegian is Danish spoken in Swedish,” referring to the pitch accents found in both Swedish and Norwegian dialects). While the independence movement of the late 1800s prompted efforts to forge a national tongue, competing schemes foiled the quest. When Norway at last gained sovereignty in 1905, it was confronted with the “Norwegian Language Controversy,” called målstriden, språkstriden, or sprogstriden, depending on which would-be national tongue is used. Currently two written languages have official standing, Bokmål (“Book Language”) and Nynorsk (“New Norwegian”).[ii] Nynorsk tends to be used more in rural areas and in the west, whereas Bokmål is more prominent in the east and north.

A different North Germanic language, Icelandic, is spoken Iceland, a country that did not gain independence from Denmark until 1944. Not inhabited before the medieval period, sparsely settled Iceland experienced minimal dialectal diversification. Its language remained close to Old Norse, and even today Icelanders can read their medieval sagas with relatively little difficulty. The language most closely related to modern Icelandic is Faroese, spoken in the Faroe Islands, an autonomous area under the sovereignty of the Kingdom of Denmark. Faroese is the official language of the islands, but Danish is taught in schools and is often used for public purposes. The long-standing Faroese independence movement evidently still has some support. 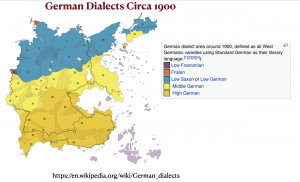 The story of the German language is distinctive, as it emerged centuries before the creation of the German state. Rather than arising from a particular dialect, its foundations were laid by authors who wanted to reach a broader audience than their own parochial dialects would allow. As in Scandinavia, religion played a significant role, with Martin Luther’s translation of the Bible being of crucial importance. Luther partly based his translation on the language used by the government of the Electorate of Saxony, a middling German state in the Holy Roman Empire whose dialect is roughly midway between the High German of the south and the Low German of the north. But Luther also drew on other central German dialects, essentially crafting a new language in the process. 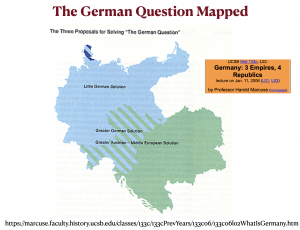 Although this written language spread widely over the Germanic areas of the Holy Roman Empire, even those of Roman Catholic faith, it did not displace the region’s many dialects. Only in the nineteenth century did Standard German emerge as a common spoken language. As it did, it helped impel the German national ideal, which in turn paved the way for political unification. But such processes generated a persistent quarrel between those who sought a Großdeutschland, or Greater Germany – covering the entire contiguous zone where German was spoken – and those who advocated instead a Kleindeutschland, or “lesser Germany.” Advocates of Kleindeutschland wanted to exclude German-speaking Austria on political grounds; as the core of the multilingual Habsburg Empire, its inclusion would have threatened the ethnonational unity of the envisioned new country. Although this “Lesser Germany” idea triumphed, the outcome remained uncertain and contested until the mid-twentieth century. Hitler viewed it as an abomination, annexing Austria as soon as he could. Another ethnonational problem stemmed from the millions of Germans who lived further to the east, found in scattered communities extending to Russia’s Volga River and beyond. After Hitler’s failed bid to encompass these areas within the Third Reich, almost all their ethnic German inhabitants either moved to Germany or adopted the languages and national identities of the countries in which they lived. Some 175,000 German speakers, however, still reside in northern Kazakhstan. 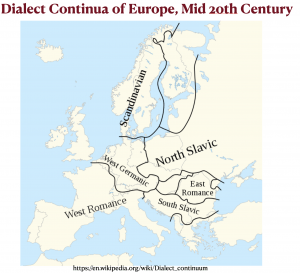 After German unification, spoken Standard German spread relatively smoothly over the linguistic continuum that encompassed the Low, Middle, and High German dialects. Today, local dialects continue to be used, but most are in rapid decline. Only in Switzerland does a regional dialect – Schwiizerdütsch – retain full vitality, spoken ubiquitously in daily life. The country’s national language, however, is Swiss Standard German (along with French, Italian, and Romansh), a slightly modified version of Germany’s national language. In Switzerland, unlike in Germany and Austria, this standardized form of the language is used mostly for written communication. Austrian Standard German is also almost identical to German Standard German. Local dialects in Austria are still used in casual conversations, but the most important of these, Central Bavarian, is most closely identified with Bavaria in southeastern Germany. 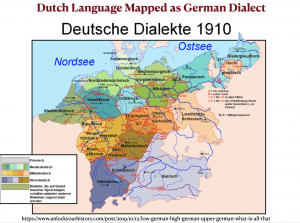 The one area of the German dialect continuum that resisted Standard German, as both a written and spoken language, is the far northwest. There the Nederlands language – Dutch/Flemish – was already politically entrenched, both in long-independent Netherlands and in neighboring Flanders, which formed the northern half of Belgium after 1830. As a result, its speakers resisted the idea, favored by many German nationalists, that their language was a mere dialect of German.[iii] The Dutch language derives from the Germanic Franconian dialect, which is viewed by some scholars as the language of the early medieval Franks, who established the Kingdom of France but 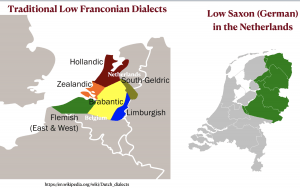 abandoned their own tongue in its lands. Franconian dialects still extend beyond the Dutch-speaking zone into Germany’s northern Rhineland. In northeastern Netherlands, contrastingly, local dialects belong to the Low German group, closely linked to northern Germany. The separate Germanic language called Frisian, the closest relative of English, is discontinuously distributed in the northern Netherlands and extreme northwestern Germany. The three existing dialects of Frisian are all classified as endangered or threatened, as their speakers increasingly switch to Dutch or Standard German. 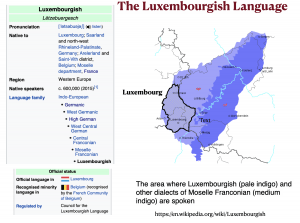 Along with standard Dutch, one other dialect in the Franconian Germanic group has a secure future, again linked to its official status in an independent country. This is Luxembourgish, the French-influenced national language of Luxembourg. Luxembourg is an unusually multilingual country; according to a Wikipedia article, “as of 2018, 98% of the population was able to speak French at more or less a high level (usually as a second language), 78% spoke German, and 77% Luxembourgish (which is the most common native language).” Fluency in English is also widespread. After World War II, Luxembourg’s government created a regulatory body for what had previously been regarded merely as a local German dialect, elevating it to national status. The limited number of its speakers, coupled with Luxembourg’s ubiquitous multilingualism, has thwarted the development of Luxembourgish literature. Luxembourg’s rightwing Alternative Democratic Reform Party, however, champions the tongue, trying to install it an official language of the European Union and seeking to make knowledge of it necessary for the naturalization of foreign-born residents.

As we have seen, the development of national languages in Germanic zone of northern Europe has been a deeply political process. The situation regarding English, also classified as a Germanic language, is similar yet distinctive, as (I hope), we shall see in a later post.