The connection between language development and state consolidation is clearly evident in Western Europe, usually regarded as the birthplace of the nation-state. Such linkages undermine the ethnonationalist assertion that nations are natural reflection of language-defined communities. We will examine this phenomenon in several posts, beginning today with the Romance zone, composed of countries whose official and national languages derived from Latin. We begin with France, which is often viewed as the quintessential nation-state. 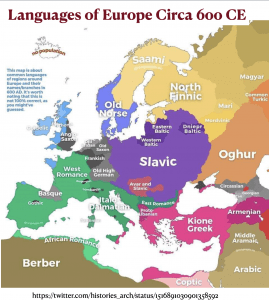 French, as spoken today, was not the language of the early medieval kingdom that evolved into modern France. Latin was used by both the church and state, while the precursor of French was the dialect of the Paris Basin, originally regarded as merely the local spoken form of Latin (or “Romance,” the language of Rome). That dialect would eventually be standardized and politicized by the evolving state, spreading widely both by both imposition and emulation. But south of the Loire River, dialects 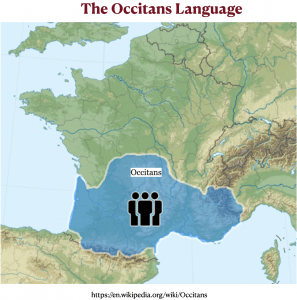 generally grouped together as Occitan long maintained their grip; in Brittany and the Basque region, non-Romance tongues continued to hold sway. In the romantic age of the nineteenth century, language was politicized in France, as it was elsewhere in Europe, for nation-building purposes.[i] But it was not until the late 19th century, or even WWI, that standard French gained dominance across 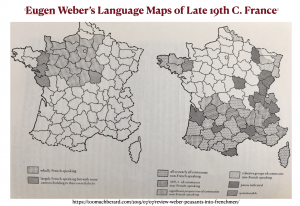 the country. Service in the military was crucial to this development. In the memorable words of historian Eugen Weber, this was part of a broader process of turning “peasants into Frenchmen.”[ii] That process is by no means fully complete today, especially in the increasingly independence-minded island of Corsica, where the local language is more closely related to Italian than to French. 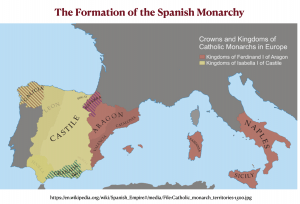 National consolidation worked out differently in the other Romance-speaking countries. Spain, also regarded as one of the world’s first nation-states, first appears on historical maps in 1469, with the marriage of Queen Isabella I of Castile and King Ferdinand II of Aragon. But but it long 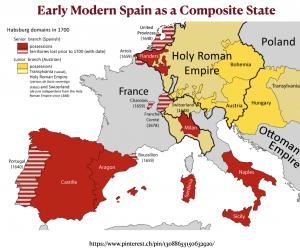 functioned as a composite monarchy, joining together diverse groups of peoples, places, and polities under one crown.[iii] Efforts to forge a closer union prompted resistance, starting with a failed Catalan revolt (the Reaper’s War) in 1640 and intensifying under the Bourbon dynasty (beginning in 1700). At that time, the Castilian dialect (castellano) began to be referred to as Spanish (español), reflecting the increasing dominance of Castile within the state. Both terms, however, are used to this day, with Article III of the Spanish constitution stipulating that “El 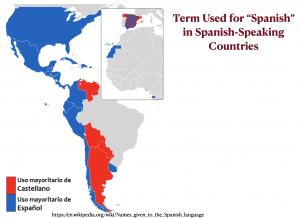 castellano es la lengua española oficial del Estado.” (Intriguingly, in some Latin American countries the language is called “Castilian” and in others “Spanish.”) In Spain, many Catalans take umbrage at the political pretension that they see as inherent in the term “Spanish.” 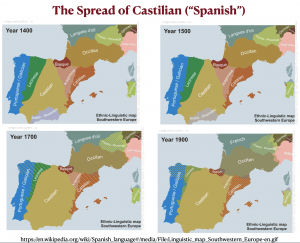 As was true elsewhere in Europe, linguistic standardization in Spain proceeded slowly as local Romance languages like Leonese and Aragonese declined in favor of Castilian. Today, only a few tens of thousands of people speak either of these once-important tongues. Resistance to Castilian was more pronounced in the Basque country, noted for its non-Indo-European language (Euskara, or Basque), and in Catalonia, where the local tongue (Catalan) is arguably a variant of Occitan. Dictator Francisco Franco (r. 1936-1975) tried to force linguistic unity across the country, compelling a Spanish identity on the Basques and Catalans and prohibiting their languages in the 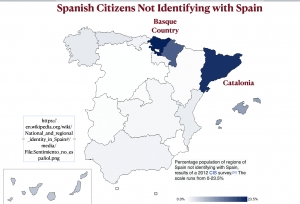 public sphere. This policy resoundingly backfired, prompting both groups to intensify their own national projects. Across the border in France, by contrast, more lenient policies and more attractive inducements to nationalism have rendered Basque and Catalan separatism largely moot.[iv] 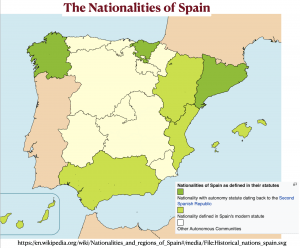 Faced with the incomplete success of their nation-building efforts, Spanish officials have tried to maintain the integrity of their nation-state by making allowances to linguistic minorities and provincial populations. After Franco’s death, the new Spanish constitution (1978) granted limited self-rule to all the country’s main political divisions, which were henceforth deemed “autonomous communities.” The Basques and Catalans are further allowed to claim the status of “nationalities” (nacionalidades). They cannot, however, officially define themselves as nations (naciones), as that would supposedly compromise the unity of Spain.[v] Such concessions have not fully succeeded in bringing either group into the larger national fold. Intriguingly, the Basque national project appears to have weakened itself by embracing violence, whereas that of the Catalans has been better maintained through its peaceful but persistent resistance. But Catalan nationalism faces 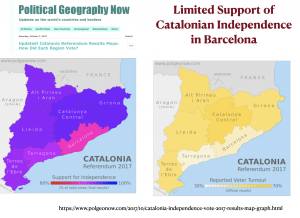 potent challenges. It is viewed with suspicion by most inhabitants of Barcelona (many of whom have non-Catalan backgrounds) and infuriates many residents of Valencia and the Balearic Islands, people who speak Catalan dialects but spurn Catalan identity.[vi] “Catalanophobia” has become widespread in 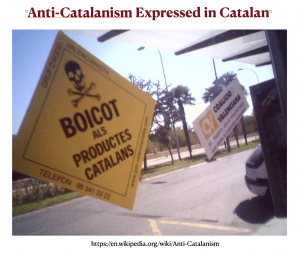 Valencia, where, ironically, calls to boycott Catalan products are issued in the Catalan language. 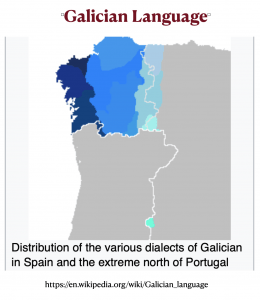 Galicia, in northwestern Spain, defies these generalizations. Its language is more closely related to Portuguese than Spanish; whether Galician is a separate language or a dialect of Portuguese is a matter of much debate. Like Catalan in Catalonia but unlike Aragonese in Aragon, Galician is still the majority language of the region. And like both the Basque Country and Catalonia, Galicia is officially granted the status of “historical nationality.” But while Galician regionalism is a potent political force, Galician nationalism has never gained widespread support (although nationalist candidates did receive 19 percent of the vote in elections in 2005). Desire for union with Portugal, on the other hand, is rare. A 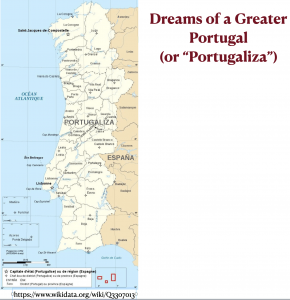 few Portuguese nationalists in Portugal, however, do dream of a Greater Portugal, or “Portugalicia.” 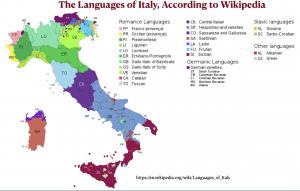 In Italy, which did not become a state until the 1870s, linguistic consolidation was delayed and remains far from complete today. Owing in part to Italy’s belated state formation, its national language derives not from the dialect of its capital, but rather from that of culturally prestigious Florence, whose Tuscan dialect was popularized through the works of Dante. Many Italian dialects are not mutually intelligible and are thus classified by linguists as separate languages. The “Gallo- 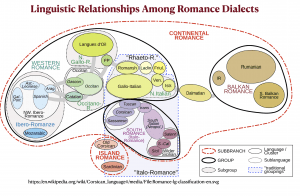 Italic” dialects of the north are more closely related to Occitan than to standard Italian, while the Friulian language of the northeast groups with the Romansh language of southeastern Switzerland. The Sardinian language is even more distinctive, having emerged from Latin before the linguistic divergence that gave rise to the other Romance languages. In addition, several non-Romance languages are scattered across parts of the Italian peninsula, including dialects of Greek and Albanian. 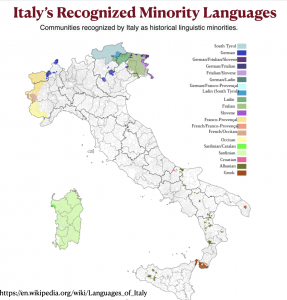 The Italian government has granted official recognition to a score of regional languages and dialects, most of which are spoken in the north. The country’s most widely used local languages, however, are denied such status, regarded instead as mere dialects of Italian. Many of these “dialects” retain 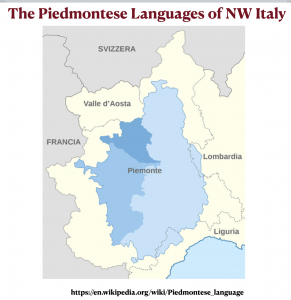 spoken vitality. The Piedmontese language of the northwest, for example, is still used by some two million people, about half of the population of Piedmont. The ability to read and write in Piedmontese, however, has almost vanished. Although the government of Piedmont gave the language official regional status in 2004, it is seldom taught in schools, upsetting local language activists. 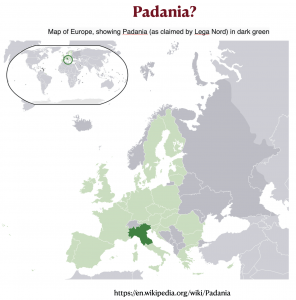 In general, the regional dialects/languages of Italy have experienced little politicization, and thus pose no threat to the nation-state. Whatever their mother tongue, almost all young and middle-aged Italians are fluent in the national language and use it on a daily basis. Although secession movements have considerable support in the north, economic grievances outweigh those of language. But if northern Italy (“Padania”), or some portion of it, ever were to separate from the rest of the country, it would be interesting to see what language policies governments would be enacted. 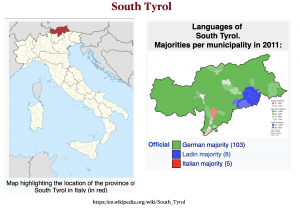 The main exception to these generalizations about language and national identity in Italy is South Tyrol, or Alto Adige, located in the far north. This mostly German-speaking region was annexed by Italy after World War I, in violation of the ethnonational self-determination principles championed by the U.S. delegation at Paris Peace Conference. Ignoring linguistic geography, Italy demanded and received a border at the crest of the Alps. This maneuver quickly spurred a Tyrolian independence movement, which engaged in occasional acts of violence though the 1960s. Although Italy has granted the region limited autonomy, support for secession remains widespread. Polling shows that more than half of the region’s German speakers would prefer to secede. Intriguingly, quite a few of its Italian speakers agree. South Tyrol is Italy’s most prosperous region, and many of its people, regardless of their native language, think that membership in the country comes at too large of an economic cost. 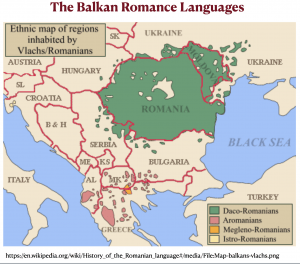 Europe’s other national Romance languages, Portuguese and Romanian, have fewer political complications. The dialects of Portuguese are all easily interintelligible; the main issue here is status of Galician in northwestern Spain, discussed above. Romanian also has relatively little dialectal diversity, with all its dialects being mutually interintelligible. This is a rather curious feature, given Romania’s relatively large size and complex history of political division and rule by other states. (The “Vlach” languages that are scattered over the southern Balkans outside of 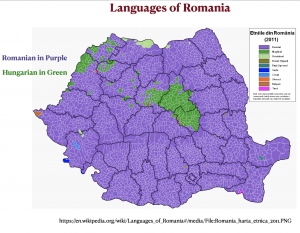 Romania, however, are sometimes classified as highly distinctive Romanian dialects.) Within Romania, the main issue of linguistic politics concerns the speakers of unrelated languages, particularly Hungarian. 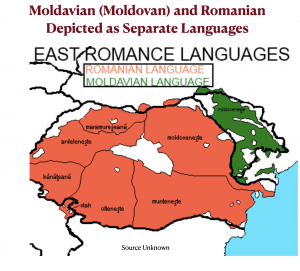 Romanian, however, is not just the national language of Romania, as it has the same status in neighboring Moldova, a former Soviet Republic. Under Soviet rule, Moldovan was classified as a separate language on political grounds, but its differences from standard Romanian are minor. 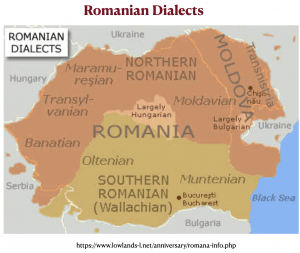 Although one does find a “Moldavian” dialect in Moldova, this form of the language is also spoken across northeastern Romania (and in a few pockets of Ukraine). Given this linguistic environment, it is not surprising that that many Romanians and Moldovans advocate unification on ethnonational grounds. Economic and political complications, however, limit its appeal. According to early 2022 polling, “only 11% of Romania’s population supports an immediate union, while over 42% think it is not the moment.” In Moldova, support for unification is also a minority position, but it rose markedly after Russia’s invasion of Ukraine. Polls asking the question “if a referendum took place next Sunday regarding the unification of the Republic of Moldova and Romania, would you vote for or against the unification?” showed an increase in agreement from approximately 20% in 2015 to 44% in 2022.

The relationships between language, politics, and geography are highly complicated across the Romance zone of Europe, challenging any facile stories of natural language-based ethnonational solidarity. The same situation is true in the Germanic language zone, as we shall see in the next post.

[i] According to Kedourie (1960, 60), “It was literary men, with literary preoccupations, who … enowed language with political significance.”