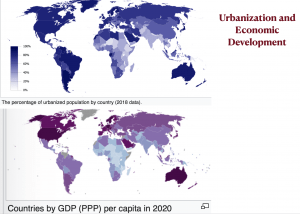 Levels of urbanization and levels of economic development roughly correlate. As can be seen on the paired maps, countries with very low levels of urbanization tend to have low levels of economic productivity (as measured by per capita GDP in Purchasing Power Parity). Burundi, for example, has the world’s second lowest urbanization rate (13.7 in 2020) and the lowest level of per capita GDP ($856 in 2022). Conversely, Singapore is completely urbanized and has the world’s second highest level of per capita GDP ($98,526 in 2022). The linkage is strong enough that urbanization is sometimes used as a proxy for economic development, especially for earlier time periods. Consider, for example, this passage from a recent study published by the Hoover Institution at Stanford University:

We find that a vector of exogenous factors that were binding constraints on food production, transport, and storage within the densely populated nuclei from which nation states later emerged account for 63 percent of the cross-country variance in per capita GDP today. Importantly, this vector accounts for progressively less of the variance in economic development (as measured by urbanization ratios) going back in time. [emphasis added] 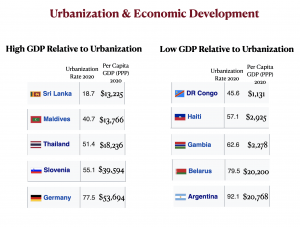 This maneuver is understandable, but its validity is questionable. Historical urbanization rates are difficult to determine, and the figures produced are often controversial. Even today, measuring urbanization is often tricky, due mainly to variations in the population-size and population-density thresholds for urban standing. More important, the correlation between urbanization and economic development is not particularly strong. Some primarily rural countries have moderately high levels of developmental, while some primarily urban countries have low levels. One finds such deviations at both the top and bottom of the urbanization spectrum. Germany, for example, is more than twice as economically productive as Argentina, but is significantly less urbanized. Sri Lanka is (or was, in 2020) is almost six times more economically productive than The Gambia, but is far less urbanized. 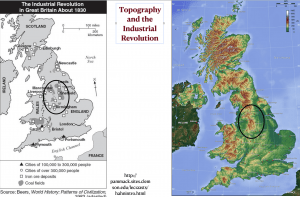 Non-urban areas can be very economically productive, especially if they have relatively high population density, good transportation networks, and proximity to larger markets. Britain’s industrial revolution itself began in rural landscapes. Although maps of the industrial revolution usually emphasize coal and iron ore deposits, industrialization was originally dependent on hydropower, which requires abundant precipitation and significant drops in elevation. Areas around the Pennine Chain, the “backbone of England,” were thus selected for the first mechanized mills, despite their lack of urban infrastructure. The first modern factory, a water-powered cotton spinning mill, was built in the village of Cromford in Derbyshire, England in 1771; others quickly followed elsewhere in the Derwent Valley. Factory owners had to build housing for their workers due to the region’s rural nature. Despite its early economic productivity, Cromford never urbanized, and today has fewer than 2,000 residents 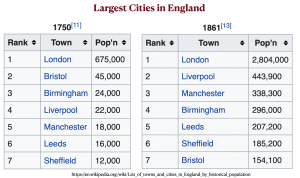 As industrialization proceeded and coal supplanted hydropower, small and mid-sized towns in northern and central England transformed into major cities. Proximity to markets and ports allowed the factories of Lancashire to supplant those of Derbyshire, and by the second half of the nineteenth century the water-powered mills of the Derwent Valley were mostly abandoned. Today 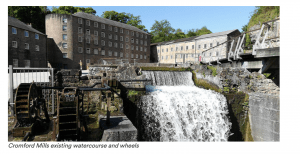 the area is a world heritage site, commemorating the industrial revolution. Currently, hydropower is being restored to make the site more economically sustainable. On August 1 of this year, the BBC reported that :

Hydroelectric power is due to return to a textile mill which helped spark the industrial revolution.

The Arkwright Society has secured a total of £330,000 from Severn Trent Water and Derbyshire County Council.

Work is due start in September with the aim of being fully operational by June 2023.