(Note to readers: The distribution of free customizable base-maps will recommence later this week) 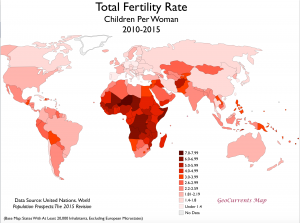 I was recently asked to make a world map of the Total Fertility Rate (TFR) using World Bank data for the period 2010-2015. The same data sheet includes TFR figures for each five-year period starting in 1950. The contrast between fertility rates in 1950 and 2015 is so striking that I could not resist the temptation to make contrasting maps. 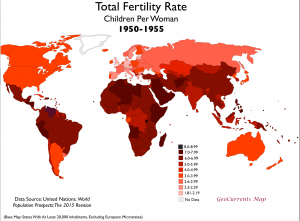 As can be seen, the overall drop in the human fertility rate has been pronounced. In countries ranging from China, to Iran, to Libya, to Brazil it has been nothing short of extraordinary. 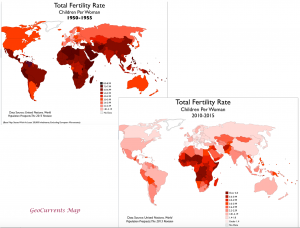 Tropical Africa, and especially the western portion of the region (“Middle Africa,” according to the World Bank), forms the major exception to this pattern. Here, several counties had higher TFR figures in 2010-2015 than they did in 1950-1955.   In DR Congo, for example, the respective numbers are 6.15 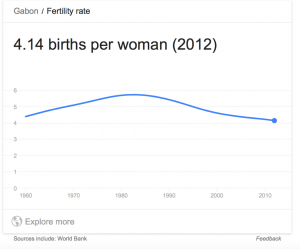 and 5.98. Gabon also ended up in a higher category in the 2010-2015 map than on the 1950-1955 map, although the actual difference between its TFR in these two periods is not statistically significant: 4.00 and 3.99. As the graph shows, Gabon’s TFR did not stay the same during this period, but rather rose gradually and then began to decline gradually. Similar graphs can be found for other countries in “Middle Africa.”

It is quite significant that extremely high fertility figures are now mostly confined to tropical Africa, with only a few exceptions (such as Afghanistan and East Timor). It also seem to me that this phenomenon has been under-reported. Certainly most of my own students come into class with the impression that high fertility rates characterize most of the word’s less-developed countries.