(Note: As I am spending the summer in Montana to be with my granddaughters and their parents, a number of forthcoming post will focus on the state.) 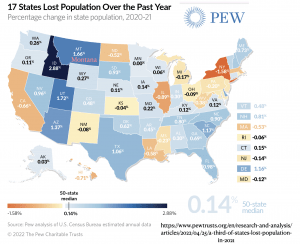 As can be seen in the map on the left, Montana is a booming state, posting the third largest rate of population growth (in percentage terms) in the United States from 2020 to 2021. In the 2022 election, Montana will gain a second seat in the U.S. House of Representatives, which it had lost in 1993 due to lagging population growth at the time. Montana is still a sparsely settled state, with the third lowest population density in the country (after Alaska and Wyoming). Its population surge, moreover, is relatively recent. As can be seen in the second map, from 2010 to 2020 it experienced a moderate rate of growth (9.6%), higher than the national average (7.4%), but well below those of neighboring Idaho (17.3%) and North Dakota (15.8%), as well as nearby Utah 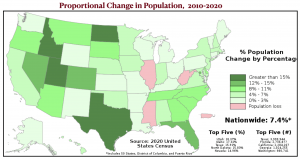 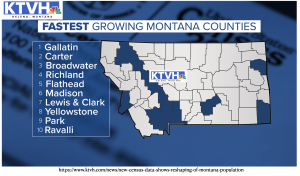 As might be expected, Montana’s recent population expansion is very unevenly distributed. Whereas some counties are experiencing sizzling grown, others continue to decline. Growth is concentrated in the mountainous west, whereas decline is pronounced across much of the Great Plains in the east. But as can be seen in the map on the left, two far-eastern counties (Richland and Carter) experienced rapid growth from 2010 to 2020, defying the regional norm. This map, however, is somewhat misleading; as Richland and Carter are sparsely settled countries, small 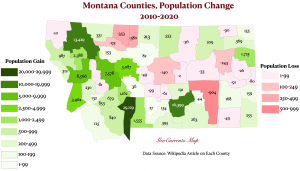 increases in absolute numbers translate into rapid proportional growth. A gain of a mere 255 residents in Carter resulted in a 22% growth rate over the decade. Previously, the tendency had been one of steady decline. In 1920 the county had 3,972 residents, dropping to 1,415 by 2020.

The growth in Richland County from 2010 to 2020 is easily explained; adjacent to the booming oilfields of eastern North Dakota, it became something of a bedroom community for housing-short Williston, ND. But as the oil boom has receded, so too has Richland County. As can be seen in some of the maps posted below, the county lost population from July 2020 to July 2021. Explaining the growth in Carter, one of the most remote counties in the lower 48 states, is more challenging. A recent article in the excellent Montana Free Press, however, is quite helpful. A newly paved road improved access to eastern South Dakota, another area of recent population expansion (due in part to the natural amenities of the Back Hills region). The article also cites a healthy county budget, owing in part to transit fees from energy pipelines, and, unlikely as it might seem, dinosaur tourism. Ekalaka, Carter’s county seat, is evidently a high point on Montana’s so-called Dinosaur Trail.

To help readers make sense of changing population patterns in Montana, I have made several versions of my population-change-by-county maps (posted below). As can be seen in one of these iterations, growth has been concentrated in and around Montana’s largest cities, although Great Falls has lagged behind. Later posts will explore some of these patterns in more detail. 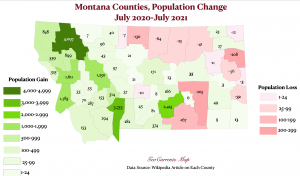 The most recent census data, covering the period from July 2020 to July 2021, shows a continuation of most of the trends seen in the 2010-2020 period. Although most Montana countries grew sharply during this time of COVID, the northern Great Plains continued in its seemingly inexorable decline. All of Montana’s larger cities, except Great Fall and Butte, saw rapid growth. So did Ravalli County in the scenic Bitterroot Valley, a zone of high rural population density (by Montana standards). Also of note is the growth rate of Flathead County in the northwest surpassing that of Gallatin County (which includes Bozeman) in the southwest. This somewhat surprising; as an expanded headline in the Montana Free Press notes, “Montana’s fastest-growing city last year? It wasn’t Bozeman. New Census Bureau estimates chart Montana’s population shifts during the first full year of the COVID-19 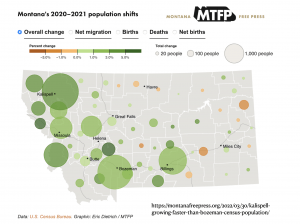 pandemic. Kalispell led the pack.” This article, by Eric Dietrich, is well worth reading, especially for Dietrich’s superb cartography. (Note that there are a few discrepancies between his map and mine; although I have re-checked the data, his figures may be more accurate.) 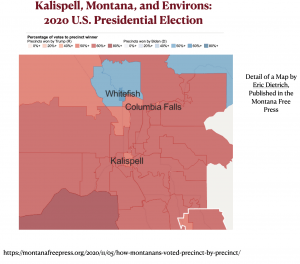 The competition between Bozeman and Kalispell is interesting. Intriguingly, Kalispell is Montana’s only significant city with no “blue” (Democratic voting) precincts, although the nearby tourism-oriented town of Whitefish is a different matter. Bozeman, in contrast, is markedly blue, as is Gallatin County as a whole. Gallatin’s smaller towns and most of its rural areas, however, are 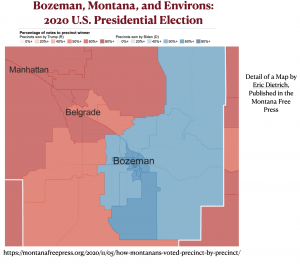 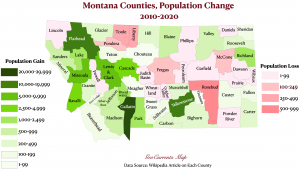 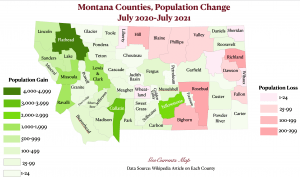 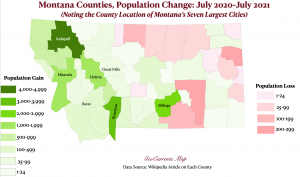 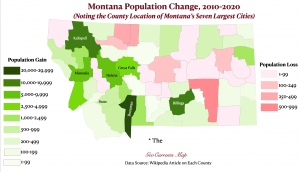