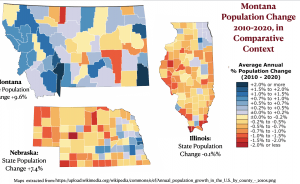 Recent posts have emphasized population decline in the Great Plains of eastern Montana. Comparative analysis shows, however, that eastern Montana has fared better than many other parts of the region. Almost every county in western Nebraska, for example, experienced population decline from 2010 to 2020. Yet Nebraska as a whole saw moderate population growth in the same period. Most of this growth was focused in the Omaha metropolitan area in the far eastern part of the state.

Although outside of the Great Plains region, Illinois also makes an interesting contrast.  In that state, almost every rural county declined, many sharply. Illinois as a whole, along with West Virginia and Mississippi, lost population during this decade. 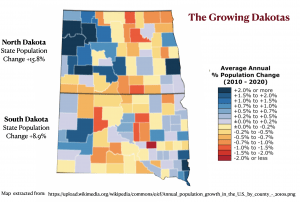 To the east of eastern Montana, the western Dakotas experienced pronounced population growth from 2010 to 2020. Growth in western North Dakota was almost entirely a result of the oil boom in the Bakken Formation. The Bakken also extends into far eastern Montana, but most of the oil extraction there took place before 2010. In western South Dakota, growth has been focused on the forested Black Hills region.