What Is a Zoom Town?

Bozeman, Montana is often described as a quintessential “Zoom town,” a city or small town that has experienced explosive growth owing to the relocation of remote workers since the beginning of the Covid pandemic. Bozeman is certainly booming, and many of its new residents do work remotely, usually through Zoom. But how widespread is this phenomenon, and where might other “Zoom Towns” be located? 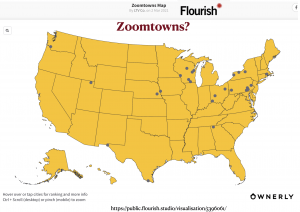 Although many article have been written recently on Zoom towns, the term remains poorly defined, with most designations based on informal impressions. Maps showing Zoom town locations are all but non-existent. The only map that I was able to find comes from the Ownerly website, specializing in data for homeowners. This map was made to illustrate an article called “Zoom Towns USA: America’s Best Cities for Remote Workers.” Ownerly devised a metric to measure Zoom-town suitability by analyzing:

445 cities across the nation, looking at rent and housing prices, cost of living, safety data, level of broadband and free Wi-Fi coverage. Besides expanding our list of cities by nearly 50% from our 2021 Best Zoom Towns list, we also added new metrics that include cost and availability of childcare, restaurants and coworking spaces.

The resulting map is reproduced here. Ownerly’s “best” Zoomtowns are concentrted in the northeastern quadrant of the country, with 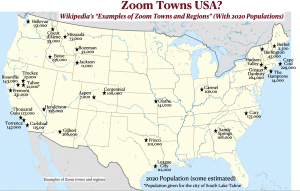 Wisconsin and Pennsylvania leading the list. But ideal though they may be, few of the towns and cities on this map are commonly deemed “Zoom towns.”  Consider, for example, a map showing Wikipedia’s “examples of Zoom towns and regions.” Intriguingly, none of these places makes the Ownerly list. Wikipedia’s Zoom towns are concentrated in the West, with California in the lead position.

Other sources have their own lists, often focused on a particular part of the country. Rate.com emphasizes towns in the Rocky Mountain region, calling special attention to Lewistown, Idaho; Walla Walla, Washington,; and Caspar Wyoming. Northwest News, focusing on the Northwest, focuses on Bend, Oregon while also mentioning Washington’s Methow Valley and San Juan Islands; Kelowna in British Columbia; Sandpoint, Idaho; and (yet again) Bozeman Montana. A BBC article on Zoom towns begins with a discussion of Fayetteville, Arkansas while also mentioning Sandpoint, Idaho; Moab, Utah; and Durango, Colorado. The article stresses the location of Zoom towns in “rural enclaves.”

Rural enclaves certainly do not dominate Wikipedia’s list of exemplary Zoom towns. Roughly half of the places on the Wikipedia list are suburbs with populations over 100,000. Such cities were growing quickly before Covid and are within the normal commuting range of their metropolitan cores. Placing such cities in the same category as Aspen, Colorado; Truckee, California; and Bethel, Maine might be a bit misleading.

A rigorous definition of Zoom town would emphasize population growth since 2020 and the percentage of workers working remotely. The latter piece of information is not easily obtainable. Using LinkedIn data, however, a 2021 Make It article claims that:

These small cities have the highest proportion of remote work applications:

These larger cities have the highest proportion of remote work applications:

Based on the information contained in this GeoCurrents post, Bend, Oregon is a good candidate for the title of America’s quintessential Zoom town. Bend was booming, however, well before it was Zooming; its population surged from 20,000 in 1990 to 99,000 in 2020.