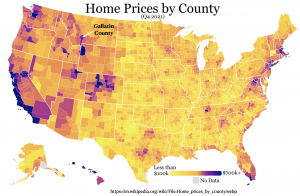 Casual conversations in Bozeman, Montana often turn to housing. Some verge on the tragic. I have spoken with several young couples who spent years saving for a down payment and were finally on the verge of making an offer – and then Covid hit, remote work intensified, and prices soared. As can be seen on the map, housing prices are high in Gallatin County as a whole, but in central Bozeman they approach the level found in California’s Bay Area. As a result, the city faces a mounting labor crisis, particularly for essential workers such as nurses. According to a confidential source, in a single unit of approximately 30 nurses in Bozeman’s Deaconess Hospital, 12 nurses quit in the past 12 months, with 9 citing housing costs as their reason. 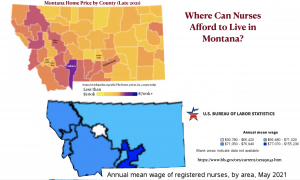 Nurses and other financially stressed residents are abandoning Bozeman for more affordable places. Several nurses have relocated to Spokane, Washington, where wages are higher and housing is cheaper. Most have opted for another Montana city. As can be seen in the paired maps, nurses make more money in Yellowstone County (Billings) than in Gallatin County, and the cost of 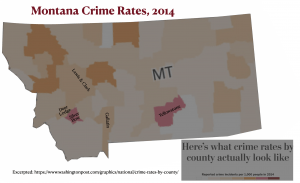 living is much lower.* Trade-offs, of course, must be factored in. Yellowstone County has a much higher crime rate than Gallatin County, and both its natural and cultural amenities are less appealing. 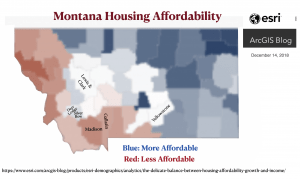 For those who value natural amenities above all and want to remain in Montana, options are more limited. Most of the scenic valleys of western Montana also have high housing costs. As can be seen on the ArcGIS “housing affordability” map, made just before the Covid price surge, Madison County, with fewer than 10,000 residents, was even less affordable than Gallatin. In such a low-population county, it does not take many affluent amenity seekers to skew the market upwards. Housing is less costly, however, in a few western counties, such as Silver Bow (Butte), Deer Lodge 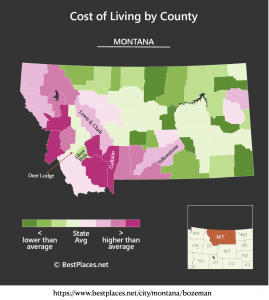 Anecdotal evidence from casual conversations suggests that the favored destination of priced-out Bozeman residents is Helena. Surrounded by mountains, Helena is nestled in a scenic location, and as the state capital it has a descent array of cultural resources. More important, it is relatively affordable and its crime rate is relatively low.

Another popular relocation place is Anaconda in Deer Lodge County, a former copper-smelting city of some 9,000 people. After a long period of decline, Anaconda is again growing. As an extended headline in a recent article in the Montana Free Press (MTFP) reads, “Building on its past, Anaconda draws new residents seeking best of Montana: The long-struggling southwestern Montana town is gaining popularity with recreationists and homebuyers. Can it retain its historic character?” As the article notes:

This isn’t the typical Montana discovery tale. Movie stars aren’t buying sprawling ranches here. Tourists aren’t pouring into town, though they are coming at a steady trickle. The rich and famous aren’t flocking to the local ski area. Rather, Anaconda’s newcomers are often young couples and extended families who want a low-pressure lifestyle in a Montana community but have been priced out of other areas. The town is an example of a historically industrial community that is adapting to a recreation economy. …

We’re seeing the refugees of Missoula and Bozeman” and other rapidly growing towns in the West, said Adam Vauthier, executive director of Discover Anaconda, an economic development organization. “The other recreation towns in the vicinity just got so big.”

But will such cities as Anaconda and Helena retain their affordability?  Footloose and often well-compensated Zoom workers also find them attractive. And prices are increasing. As the Montana Free Press(MTFP) article notes, “the Multiple Listing Service shows a median home price of $294,000 in Anaconda, up 36.7% over the same time in 2021.” Some local residents are also concerned about the city’s changing demographic characteristics. As one resident told MTFP reporter Erin Everett, “’We want to get rid of the buffalo touchers’ … referring to visitors who get too close to bison in Yellowstone National Park.”

*As the paired maps also show, Golden Valley County is an even more advantageous location for nurses, but with only 823 residents, employment opportunities are limited.