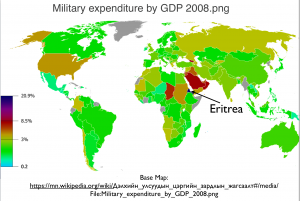 Yet again, other obligations have prevented me from making regular GeoCurrents posts. Most of my recent time has been devoted to preparing lectures for my course on the History and Geography of Current Global Events. This week’s talk was on the Mediterranean Migration Crisis; the lecture slides are available at the link below (“MediterraneanMigration”). The remainder of this post summarizes those slides

The lecture began with an overview of recent events, using media headlines, maps, graphs, and quotations from various articles. The table on page 11 departs from this introduction, showing that although human smuggling—whether across the Mediterranean or anywhere else—is indeed a big business, it is much smaller than many other illicit activities, including that of counterfeiting auto parts (the table is from the invaluable site Havocscope: Global Black Market Information). Slides 14-19 consider some of the reasons why human smuggling and its associated fatalities have increased recently, including Italy’s abandonment of “Operation Mare Nostrum” and the construction of border barriers by Greece and Bulgaria.

The next slide simply outlines the remainder of the lecture: 1. Global Perspectives on Migration; 2. Local Particularities: Europe and the Mediterranean; 3. Response from Europe & Repercussions for Europe; 4. Contrasts with Australian Policy.

Slides 21-34 present maps and other visuals that try to capture the global dynamics of international migration. The overarching idea here is that people tend to move from poor and chaotic countries to wealthier and more stable ones. The best of these maps is a busy and somewhat dated French portrayal that contains a wealth of information. Slides 26 and 27 illustrate the under-appreciated fact that a major portion of migration occurs within the so-called Global South, going from poor countries to richer but still not “fully developed” ones. (In discussing slide 28, however, I critique the very notion of the “Global South,” as the conventional definition places a number of impoverished states on the “rich” side of the line [Tajikistan, Moldova] and quite a few wealthy countries on the “poor” side [Singapore, Qatar]). The next set of images gives information on a few particular instances of troubled international immigration in the “South,” including Nicaraguans moving to Costa Rica, Paraguayans and Bolivians going to Argentina, and Indonesians migrating to Malaysia. Slides 33 and 34 show that this process sometimes goes into reverse, as when Ivory Coast experienced protracted conflicts that resulted in millions of people from Burkina Faso and Mali fleeing back to their homelands.

With slide 35, the lecture returned to the current crisis in Europe and the Mediterranean. Slides 36-38 show migration routes, but not very accurately (the last of these maps appear to be the best). More significant is slide 39, which includes two tables showing the countries of origin of people illegally crossing the sea into Europe in recent months. This slide brings up the significant question of why these particular countries send so many would-be immigrants into Europe. Some are easy to explain on the basis of war and related calamities, such as Syria, Afghanistan, and Somalia. Others can be explained on the basis of severe repression, including the Gambia and Eritrea. A number of these slides (41-50) delve into the horrors of life in contemporary Eritrea. Beginning with slide 50, the lecture took on the issue of why Libya has become the main embarkation point for trans-Mediterranean migrants. Here I first explored the political chaos encountered now in Libya and then considered the legacy of Muammar Gaddafi in encouraging trans-Saharan immigration into his country. The final slides in this section examine to proximity of Libya to the Italian island of Lampedusa, considering as well the conditions found on that small island.

At this point, the lecture turned to the responses to the crisis found in Europe. Different European countries have had different reactions, and the EU’s “ten-point plan” has been wide criticized for being weak and ineffectual. Many Europeans, however, maintain that they have been unduly taken to task, especially considering the fact that Europe takes much more than its “fair share” of asylum seekers. Some European countries, however, attract many more asylum seekers than others (slide 73), but do so for different reasons. Sweden is particularly generous, while Hungary is merely located in an area that is easy to reach for many asylum seekers. Slides 76 and 77 examine Europe’s detention system for people claiming refugee status, considering as well the criticisms of this system by human-rights activists.

The next set of slides examine debates within Europe over the larger immigration issue. Images 98-82 consider the argument that Europe needs high levels of immigration due to its low birth rate and rapidly increasing dependency burden, showing as well the growing demographic imbalance between Europe and sub-Saharan Africa. But as the next group of slides shows, Europeans are increasingly opposed to high levels of immigration, although sentiments vary considerably from country to country (with Italy and Sweden at opposite ends of the spectrum). Attitudes also vary widely in regard to the country-of-origin of would-be immigrants. Perhaps surprisingly, in Western Europe opposition to migration from Eastern Europe is almost as strong as that to migration from the Middle East or Sub-Saharan Africa.

Beginning with slide 86, the presentation considers the political ramifications for Europe of the migration crisis, focusing on the rise of so-called right-wing, anti-immigrant parties, most of which are also highly skeptical of the EU. In the lecture, efforts were made to differentiate the political philosophies of these various parties, which differ significantly. Map 89, for example, distinguishes the “extreme far right” from both the “far right” and the “populist right.” Although the distinction between the “extreme far right” (Jobbik in Hungary, Golden Dawn in Greece, and Attack in Bulgaria) and the other parties seems valid, I am not convinced about difference between the “far right” and the “populist right.” Although Alternative for Germany has often been portrayed as populist in the German press, as it is on the map, it appears to me to be more of a neo-liberal (or “classical liberal”) party. At any rate, the remainder of this section of slides provides more detail on number of these parties. As can be see, they generally have heavier representation in the European parliament than in the legislative chambers of their own countries.

A number of these parties would like Europe adopt immigration policies more like those of Australia. The final set of slides thus outline the Australian immigration system, examining policies on both asylum seekers and those seeking work permits through standard immigration channels.