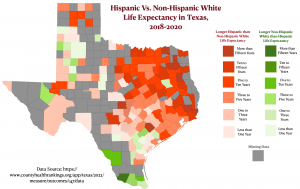 In Texas, Hispanics can be expected to outlive non-Hispanic whites by 2.8 years. The gap between the two groups, however, varies widely by county, as can be seen in the map posted here (derived from this data source). The patterns are clear and intriguing. In the most heavily Hispanic – and 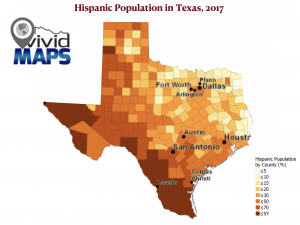 quite poor – counties of south Texas, non-Hispanic whites have the advantage.  In east Texas counties with proportionally fewer Hispanics, Hispanics have a decided advantage.

Some of the data in this tabulation, however, must be questioned. In Lamar County, for example, Hispanics are listed as have a “100+” life expectancy, as opposed to a non-Hispanic-white figure of only 73.7 years. Lamar, a county of roughly 50,000 residents, is 8.8 percent Hispanic (4,412 persons in 2020). I have a difficult time believing that a population this large could really have a life expectancy of over 100 years. The same table also lists non-Hispanic whites in Starr County in far south Texas as having a life expectancy of over 100 years. Non-Hispanic whites only make up 1.78 percent of this county’s population. Intriguingly, Starr County’s non-Hispanic white population plummeted from 2,449 in 2010 to 1,171 in 2020. These patterns are difficult to explain and deserve further investigation.